Skip to content
We are using cookies for a better user experience.
07/20/20
Neuburg a. d. Donau
Sports

Links
{{ activeItem() }}
Twitter
08/12/20
“Yeah, very, very happy. Third place, my first podium in Formula E.” – @ReneRastRacing. More from him,… https://t.co/wgaJ7TisrR
08/12/20
Fanboost is open for round 11 of @FIAFormulaE in Berlin. Vote for @LucasdiGrassi and @ReneRastRacing: &gt;&gt;… https://t.co/QxTqG36A7o
08/12/20
Our position in the teams’ standings with one race to go in the 2019/2020 @FIAFormulaE season. &gt;&gt;… https://t.co/9ZYmWo7wfz
08/12/20
.@ReneRastRacing’s podiums moves him up to 16th in the drivers’ standings. @LucasdiGrassi is still in the battle to… https://t.co/WfcM5YGfxW
Audi Sport on Twitter
{{ activeItem() }}
Facebook
08/11/20
Victories for the Audi R8 LMS in the GT World Challenge Europe at the Misano World Circuit highlighted a weekend with wins and podiums around the world. Well done to our customers. 🇮🇹 🇩🇪 🇨🇳 🇷🇺 🇧🇪 🇿🇦 🇸🇪 🇺🇸 >> audi.com/GT3 >> audi.com/GT4 >> audi.com/TCR #PerformanceIsAnAttitude
08/10/20
Before heading to Lausitzring this weekend, let’s have a quick look back on the DTM safety measurements at the track in Nico Mueller’s latest #DriversDiary. >> audi.com/DTM #PerformanceIsAnAttitude #ThanksToDTM
08/10/20
We will be back racing at the Lausitzring for the next two weekends. Let’s have a look back on our history at the circuit. >> audi.com/DTM #PerformanceIsAnAttitude #ThanksToDTM
08/03/20
What a start to the DTM season it was for Nico Mueller! Race victory and he is currently leading the drivers’ standings. See how he experienced the weekend in his latest #DriversDiary. >> audi.com/DTM #PerformanceIsAnAttitude #ThanksToDTM
Audi Sport on Facebook 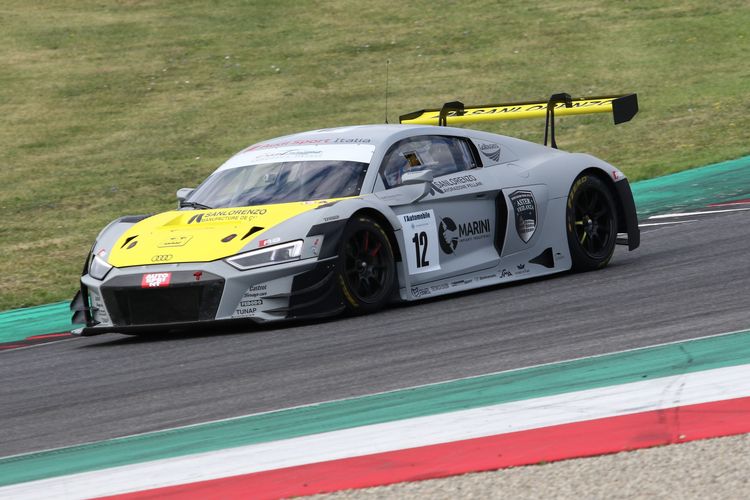 Audi Sport Italia made a strong start in the Italian GT Championship in an endurance race that was fiercely contested all the way to the end. Two GT4 exploits and one podium result each for the Audi R8 LMS GT2 and the Audi RS 3 LMS round off the weekend’s success.

Thrilling endurance race in Italy: Audi Sport Italia won the three-hour endurance race at Mugello in the season opener of the Italian GT Championship. Team Audi Sport Italia, whose management is shared by team founder Emilio Radaelli with Ferdinando Geri for the first time this year, dominated two of the three practice sessions, captured the pole position in qualifying and fought with its rivals in the race for thousandths of a second. In the cockpit: Audi Sport driver Mattia Drudi, Daniel Mancinelli as well as last year’s sprint champion Riccardo Agostini, who switched to Audi Sport Italia for this season. Agostini drove the start and initially fell behind a BMW. After 21 laps, the Italian overtook the car in front of him in traffic and handed over the Audi R8 LMS to Daniel Mancinelli at the first pit stop with a nine-second lead, who was able to keep an advantage of eight seconds until he handed it over to Mattia Drudi. In the last six laps of the race, the Audi Sport driver fought for every metre with BMW driver Alexander Sims. Despite slightly impaired aerodynamics due to body parts damaged in the fight, Drudi and his team mates won by exactly 26 thousandths of a second after 498 race kilometres. The next round is scheduled in Misano in two weeks’ time – this time consisting of two 50-minute sprint races.

Victory at Sebring: In the IMSA Michelin Pilot Challenge, the Audi Sport customer team CarBahn with Peregrine Racing celebrated its first victory of the season in chaotic weather conditions at Sebring. Initially, Tyler McQuarrie had to wait 75 minutes on pole position due to a thunderstorm before race control allowed him and his 21 opponents to start in the strong GT4 field. The American took the lead in the Audi R8 LMS GT4, but after only five laps the bad weather forced a 70-minute race interruption. Afterwards McQuarrie took no risks on the wet airfield circuit and relinquished the lead. His team mate Jeff Westphal then took the lead again after the pit stop. Last year’s champions finally won the second race of the season with a two second lead. After fourth place at the season opener in Daytona in January, McQuarrie/Westphal took the top of the standings for the first time this year, and CarBahn with Peregrine Racing also leads the team standings. Drivers and team are five points ahead after two of ten events.

Opening success in Spain: At the start of the Campeonato de España Resistencia, the Audi R8 LMS GT4 clinched a class victory on the Iberian peninsula. Team Baporo Motorsport who were third last year in the GT Cup Open Europe series with Audi competed on the Navarra circuit in the north of the country with Daniel Diaz-Varela and Manel Cerqueda. The Spanish-Andorran driver line-up started from the pole position of Class C3 and won the 50-minute race with a 10.8-second lead.

Podium in Navarra: At the season opener of the Spanish endurance racing series Campeonato de España Resistencia, an Audi Sport customer team clinched a podium finish with the RS 3 LMS. The Spanish SPV Racing team clinched third place in the TCR class with Philipp Smaali/Alvaro Fontes from grid position three in the second race. With ten competitors, this category attracted the biggest number of competitors in the mixed sportscar and touring car racing series.