Skip to content
We are using cookies for a better user experience.
05/06/19
Neuburg a. d. Donau
Sport 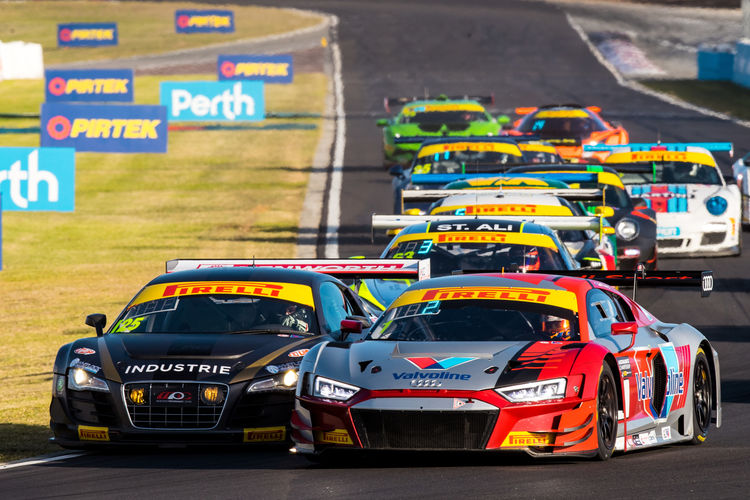 Two last year’s champions had a strong weekend: in Australia, Geoff Emery in an Audi R8 LMS clinched his first victory this season and in Sweden Jan Brunstedt did.

Two Audi victories in Australia: The second round of the Australian GT was dominated by two Audi Sport customers. On the circuit at Barbagallo in the west of Australia, up-and-coming driver Ryan How delivered an impressive performance in the first race on celebrating victory in a first-generation Audi R8 LMS ahead of Geoff Emery in a current Audi R8 LMS. In the second race, last year’s champion Emery scored second place for Team Valvoline, with Ryan How trailing him by merely 1.3 seconds. In the third race on the fast track north of Perth, Geoff Emery subsequently claimed his first victory this season. As a result, the Australian has advanced from fourth to second place of the standings, now only six points short of the top spot. In the Trophy classification for drivers of older race cars, Ryan How extended his lead to 37 points.

Successful start to the season in Sweden: Jan Brunstedt is continuing where he left off in Sweden last year. The Gentleman driver who won the Swedish GT Championship last year was unbeatable again at the beginning of the new season. At Mantorp Park, the privateer in his Audi R8 LMS ultra won both races of the SSK series.

Trophy in England: In the season opener of the Blancpain GT World Challenge Europe on the circuit at Brands Hatch, an Audi Sport customer team clinched a podium finish. Dutchman Steijn Schothorst and his Australian teammate Nick Foster in an Audi R8 LMS from Attempto Racing finished the second race in third place. The Arkin Aka squad from Hanover had repaired the GT3 sports car in time within a few hours following an accident in race one. With a total of twelve race cars in the field of 26 entrants, Audi is the best-represented brand.

Fierce battles in opening event: The 2019 season of the Italian GT Championship at Vallelunga began with missed opportunities for Audi Sport Italia. After new signing Andrea Fontana in an Audi R8 LMS had secured pole position in his first qualifying, slower drivers obstructed the Italian in race one during the restart following a safety car period and caused him to drop to sixth position. In the second race, Audi Sport driver Pierre Kaffer started from fifth, improved by one position and handed the car over to Fontana in fourth position. The Italian returned to the track in second place when rain forced the teams to make an unscheduled pit stop 18 minutes before the end of the race. On rain tires, Fontana took the lead. Drizzle, however, frustrated the strategy of the team that had selected a tire inflation pressure for heavier rain, so Emilio Radaelli’s outfit in the end had to settle for third place.

Second place in the United Kingdom: Last year’s championship-winning team Phoenix Racing was in good form again in round two of the GT4 European Series at Brands Hatch. Following third place in the season opener at Monza, Dane Nicolaj Møller Madsen and his Swiss teammate, Cédric Freiburghaus, mounted the podium once again. In the second race in the UK, the driver duo in an Audi R8 LMS GT4 improved from sixth on the grid to second position in the 31-strong field.

Trophy at Mid-Ohio: Following their first victory this season at Sebring in March, Team Carbahn Motorsports continued its string of good results in the IMSA Michelin Pilot Challenge at Mid-Ohio. Tyler McQuarrie/Jeff Westphal in an Audi R8 LMS GT4 on claiming third place had to admit defeat after two hours of racing by 3.5 seconds. In the standings, the American driver duo after three of ten events is ranked in third position – short only four points of the top spot and trailing the runners-up by two points.

One-two result at Vallelunga: The second round of the TCR DSG Endurance Series turned into a turbulent race on a drying track at Vallelunga. During two hours of racing the lead changed six times. In the end, victory for the first time went to an Audi customer team: Ermanno Dionisio/Giacomo Barri from BF Motorsport in an Audi RS 3 LMS prevailed over Sandro Pelatti/Gabriele Volpato with a 15-second lead. As a result, after two of six events, Barri/Dionisio took the lead of the standings.

Victory and third place for Brink Motorsport: The TCR Scandinavia at Knutstorp began superbly for the Brink Motorsport customer team. In the first race, Tobias Brink was battling for second place with former champion Robert Dahlgren and on a drying track saw the flag in third place with a half-second gap. In the second race, Andreas Wernersson in an another Audi RS 3 LMS from Brink Motorsport from second on the grid stormed past his teammate, Hannes Morin, to take the lead and clinch the win. Wernersson is the leader of the standings with a two-point advantage after the first race weekend.

Best result in IMSA season: In the IMSA Michelin Pilot Challenge, the Audi Sport customer racing teams with the Audi RS 3 LMS in the third race achieved their best result so far this season. Following third place in the season opener at Daytona and position two at Sebring, two driver squads mounted the podium for the first time at Mid-Ohio. Gavin Ernstone and Jon Morley with Team Roadshagger Racing by eEuroparts.com achieved second place ahead of Russell McDonough/Ryan Nash from eEuroparts.com Rowe Racing. McDonough/Nash in third position of the standings are currently the best driver team with an Audi RS 3 LMS in the championship standings.

Gripping racing in the WTCR – FIA World Touring Car Cup: 23 drivers within one second in qualifying, six brands in the top ten in each of the three races – this is how thrilling the FIA WTCR presented itself most recently on the second race weekend in Hungary. Now Audi Sport drivers Niels Langeveld, Gordon Shedden, Jean-Karl Vernay and Frédéric Vervisch are looking forward to the third event in the Slovak Republic. At the Slovakiaring, Belgian Frédéric Vervisch from Comtoyou Team Audi Sport in the third race decided an extremely close battle for third place in his favor a year ago. In a photo finish, both competitors crossed the line separated by only 0.039 seconds. Scotsman Gordon Shedden treated the fans to a fightback from 25th to eleventh place in the second race in Hungary a week ago, but then retired due to an accident. Vervisch’s teammate, Niels Langeveld from the Netherlands, intends to open his account of points in round three. And Shedden’s French teammate, Jean-Karl Vernay, from Leopard Racing Team Audi Sport a week ago scored the 20th podium finish of the Audi RS 3 LMS in the FIA WTCR. After two second places on the first two weekends this season, the Frenchman now plans to battle for his fifth race win in the series.

Variety galore in China: On the second race weekend, the Audi Sport R8 LMS Cup thrilled the fans at Zhuhai with gripping racing. In the first sprint, Australian Yasser Shahin achieved his first victory in the one-make cup. Daniel Bilski trailed him in second position after several other favorites suffered setbacks. Following a spin, Bhurit Bhirombhakdi had managed to fight back to second position but was given a penalty for overtaking under yellow flags and lost ground. A day later, the Thai again showed a zest for attack and drove to victory in the rain. However, up until the end, he was under massive pressure by last year’s champion Andrew Haryanto. The Indonesian from the last position on the grid had advanced to second place and at the finish had to admit defeat by merely 0.6 seconds. In both rounds, the Filipino race driver Vincent Floirendo on returning to the Audi Sport R8 LMS Cup achieved third place, so the first four races of the one-make cup saw four different winners. The new leader of the standings after two of five events is Yasser Shahin, ahead of Daniel Bilski and Australian Tony Bates. Victory in the GT4 classification at Zhuhai went to the Chinese Li Lin in race one and to Chan Hung Wai from Hong Kong in the second race.

Two victories for Rahel Frey: Audi Sport driver Rahel Frey won both races in the Audi Sport Seyffarth R8 LMS Cup season opener at Hockenheim. The first round already featured variety galore: Rudolf Rhyn in the rain had secured pole position with a clear advantage and took the lead at the flying start. Rahel Frey fought her way past Polish driver Jedrzej Szczesniak and at the Motodrom took the lead from her Swiss compatriot Rhyn. On lap four, Rhyn spun and had to serve a drive-through penalty for jump-starting. German-Italian Fabio Citignola took second place and Robin Rogalski from Poland secured third position. In the second race, Rahel Frey was not able to directly convert her pole position but had to admit defeat to Robin Rogalski in the starting duel. Frey overtook her rival only on lap six and went on to score her second victory this season. Rogalski and Citignola completed the podium. Rahel Frey, who serves as a mentor to the Cup participants, is now leading the standings with 43 points, trailed by Rogalski and Citignola who are tied on 37 points.