Audi R8 LMS to be homologated for Grand-Am 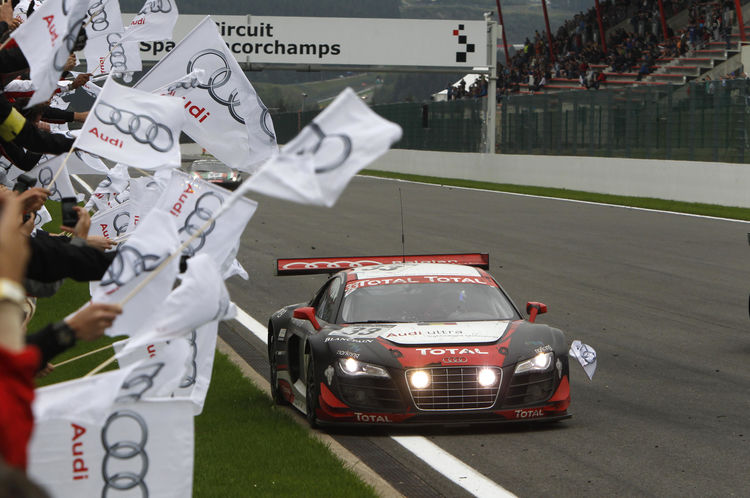 Audi is now preparing the successful R8 LMS customer sport model for the U.S. market as well. A dedicated racing version conforming to Grand-Am regulations is planned to make its debut at the anniversary race of the Daytona 24 Hours in January 2012 in the hands of customers.

Audi’s successful GT3 sports car has celebrated more than 100 victories in Europe, Asia, Australia and South America. From 2012 on, the Audi R8 LMS will now also be available on the North American market. For this purpose, Audi is developing and homologating the brand’s first customer sports race car for the regulations of the Grand-Am Endurance Series in the USA.

Right in time for the 50th running of the Daytona 24 Hours (January 28 to 29, 2012) an endurance race tested, attractive new GT race car will be available to Audi’s customers. With overall victories at the Bathurst 12 Hours in Australia, the Spa and Zolder 24 Hours in Belgium and another GT3 victory at the Nürburgring 24 Hours the production-derived GT3 race car which the U.S. version is based on has again proven its qualities on numerous occasions this year.

For use in the USA, quattro GmbH is modifying the GT3 race car of which more than 40 units have already been sold in the areas of the chassis, body, engine and suspension. The chassis is stiffened by a roll cage with wall thicknesses being increased to two millimeters according to the regulations. A new front splitter, a modified rear diffuser and a standard Grand-Am rear wing change the aerodynamics of the sports car. The rated output of the engine has to be reduced to a lower level of about 331 to 346 kW (450 to 470 HP) by an air restrictor and the engine electronics. At the same time, the capacity of the fuel tank, which can now be filled on both sides of the vehicle, is limited to 83.3 liters. In the area of the wheels and suspension three-part rims are used. The standard anti-lock system and traction control of the R8 LMS are prohibited as driving aids in the USA.

“We’re convinced that we’re making a very attractive offer to our customers in the USA that will meet with great response,” says Romolo Liebchen, Head of customer racing at quattro GmbH. “The anniversary event of the Daytona 24 Hours is a perfect occasion for the debut of the U.S. version of the new Audi R8 LMS.”

At the endurance classic in Florida as well as at the other rounds of the Grand-Am racing series customers can rely on substantial support. Audi Sport customer racing will accompany the entire 2012 season in the USA with a technical crew and provide consultancy to the race teams. In addition, Audi is exploring the possibilities of future uses the Audi R8 LMS at other endurance events in the United States of America.