Audi R8 LMS on grid positions one and five 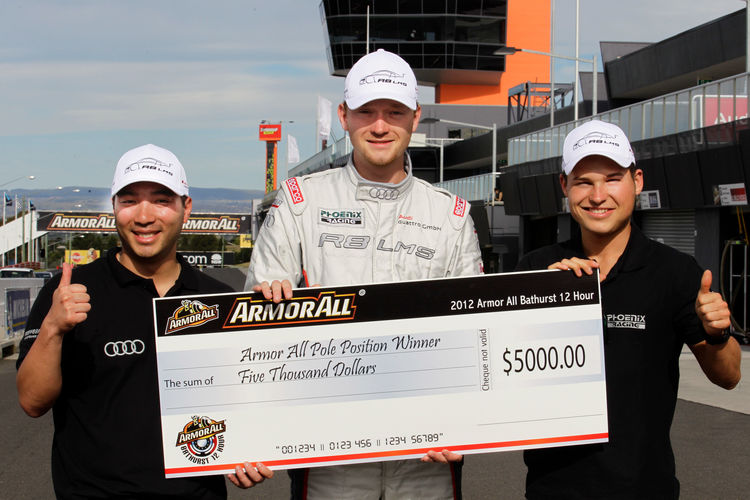 Phoenix Racing managed to score an excellent result in qualifying for the Bathurst 12 Hours in unusual conditions. The six racers had to lap the challenging circuit in Australia fast but not too fast as those who stay below a specified minimum time at Mount Panorama in qualifying have to compete in the race with ballast. Heavy traffic on the circuit and two kangaroos that crossed the track in the first qualifying session made the task even more difficult.

Kangaroo meets kangaroo: The first encounter of the black number “1” Audi R8 LMS sporting a kangaroo design with a real pouched mammal occurred right at the beginning of the first qualifying session. Christopher Mies (D) was on his warm-up lap when two of the Australian marsupials were hobbling across the track in front of him. Unfazed, the 22-year-old professional racer managed to set a lap time of 2m 09.1254s on lap three of an unusual qualifying session: The best time set by each of the three drivers of a vehicle is aggregated for the starting grid. The other special feature of this format: Those who require less than 2m 08s per lap have to run with 50 kilograms of ballast in the race. In addition, this best time is cancelled.

Christer Jöns (D), who as Mies’ team-mate is running at Bathurst for the first time, immediately achieved a time of 2m 10.3129s despite heavy traffic on the track. Darryl O’Young from Hong Kong, who won last year’s race together with Christopher Mies, completed the qualifying session for car number “1” with a time of 2m 09.2213s. The international driver squad thus secured the pole position. The team donated the prize money of 5,000 Australian dollars for the best time in qualifying to a charity. The sum will go to the Inwood family from Bathurst who will be burdened by exceptional costs due to an impending organ transplant.

The second Audi R8 LMS with the Australian driver trio completed the team’s success. Mark Eddy/Craig Lowndes/Warren Luff, who started from position one at Bathurst last year, drove their white number “2” R8 LMS to grid position five. The fastest lap of the weekend in an Audi was achieved by Warren Luff. He lapped the 6.213-kilometer roller-coaster circuit in 2m 08.9396s. Craig Lowndes achieved a time of 2m 10.0394s. Team United Autosports with its drivers Alain Li/Mark Patterson/Frank Yu will start into the race in another Audi R8 LMS from position seven.

In the afternoon’s second qualifying session in hotter outside temperatures no further lap time improvements were possible. At the same time, Team Phoenix Racing which is competing in Australia for the first time saved valuable sets of tires for the race. The Bathurst 12 Hours will start on Sunday at 6:15, local time (Saturday night 20:15 Central European time). All fans can watch the race on www.audi.tv by live streaming provided by the organizer.

Romolo Liebchen (Head of Customer Sport quattro GmbH): “We successfully mastered a challenging task at Bathurst. We weren’t allowed to break the sound barrier of 2m 08s yet had to fight for every tenth as our rivals were aiming to get as close to this time as possible too. One opponent even beat the mark and now has to add 50 kilos of ballast. In heavy traffic on the narrow track our drivers hardly caught a free lap. We deliberately avoided risks and now we’re in front despite our conservative strategy. ‘Well done’ to Christer Jöns, Christopher Mies and Darryl O’Young who achieved the fastest time with a balanced performance. We also know though that in the 12 racing hours on Sunday endurance qualities count, not grid positions. We’re extremely well prepared for this endurance race with the R8 LMS.”

Ernst Moser (Team Director Phoenix Racing): “The aim was for all drivers to be in a lap time window of 2m 08.5s to 2m 09.5s. We didn’t quite make that but came relatively close. When Mark (Eddy) was driving he repeatedly saw red flags, so he couldn’t improve his time of 2m 13.2949s. Afterwards, we didn’t take any more risks. We’re pleased with our grid positions. For Phoenix Racing, Bathurst is a nice new challenge which we truly enjoy. With its combinations of turns and 170 meters of vertical difference it reminds us of the Nürburgring-Nordschleife. We feel very comfortable in Australia.”

Christer Jöns (Audi Top Service R8 LMS #1)
“Grid position one is very nice. My team-mates did a really good job. Unfortunately, I wasn’t able to take advantage of the tires’ top performance because I was driving in traffic. I set my personal best time when the tires had started degrading. Still, the aggregate of our times was enough for the best result.”

Christopher Mies (Audi Top Service R8 LMS #1)
“On my first run at Bathurst in a year I saw the kangaroos in qualifying of all times. But I wasn’t on a flying lap yet so nothing happened. When I started, the tire pressure was a bit too low. We then improved that for Darryl (O’Young) and Christer (Jöns) once more. Still, I was driving a pretty decent time on the track that at first was relatively clear. Afterwards, Christer and Darryl did very good laps as well. I believe we’ve got an extremely well prepared car for the race.”

Darryl O’Young (Audi Top Service R8 LMS #1)
“Fortunately, I caught a free lap and I also achieved a nice time in the process. I really like the qualifying format with the aggregation of the times set by all three drivers. That’s true team sport. And each one of us showed a good performance today.”

Mark Eddy (Audi Finance R8 LMS #2)
“In the end, the qualifying result was quite okay because the conditions were really difficult: a lot of cars on track, several red flags. So we decided not to take any more risks and to instead save tires for the race. The car feels very good and we’ll be able to drive a good rhythm with it in the race. I think that strategy will also be very crucial in the end.”

Craig Lowndes (Audi Finance R8 LMS #2)
“It’s a great feeling to be sitting in the Audi R8 LMS again. Unfortunately, traffic was very heavy in qualifying. Especially up on the hill in the narrow track sections overtaking is hardly possible. After a few changes since the free practice, the R8 LMS feels fantastic. The rear is now nice and stable particularly on the fast sections. I feel really comfortable in the car. The Audi is reliable, consistent and easy to drive. That’s good for a 12-hour race.”

Warren Luff (Audi Finance R8 LMS #2)
“The Audi R8 LMS’ balance is top-notch. The guys improved the car once more from Friday to Saturday. We’re all very happy and confident to have a fast car for the race. Saturday wasn’t so important. Sunday is the day that counts.”