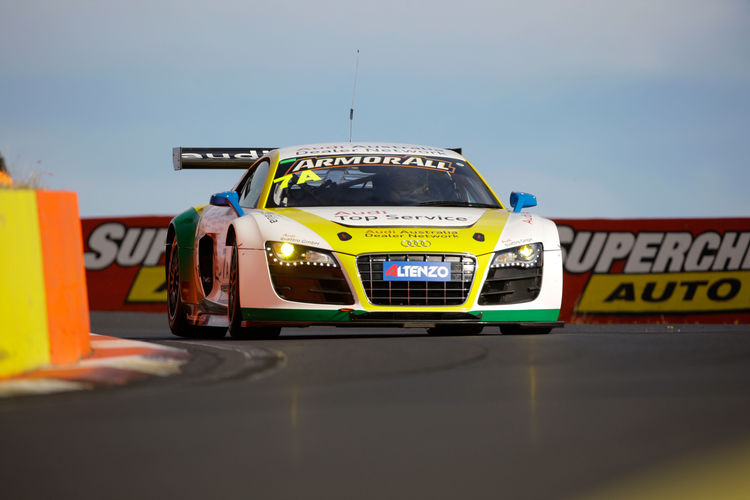 In spite of a very short period of preparation, Audi race experience Team Joest had a dream start to the Bathurst weekend. After two free practice sessions of only 50 minutes each, the outfit achieved the best possible result on the demanding track with the Audi R8 LMS claiming first row in qualifying. An evenly-balanced performance of the line-ups paid off as the individual best time of each driver was taken into account for an aggregate result that determined the starting grid. In the field of 26 entries, it was not the car with the individual best time of one driver that eventually led the standings.

Inside the Audi camp, the chase for the best time turned into a “Luff affair”: Warren Luff claimed the best time of an Audi driver, setting a lap time of 2m 09.6s. The aggregate time of all Audi R8 LMS #7 drivers added up to 6m 35.3s. A balanced team result was completed by the Audi R8 LMS #8 car: Its sum of the three drivers’ times on the undulating 6.213 kilometre Australian circuit was only three tenths slower. Marc Basseng was fastest of the three Bathurst rookie drivers and drove a 2m 10.8s lap.

Audi race experience Team Joest focused only in first qualifying on the battle for pole position. The team based in Wald-Michelbach (Germany) used the second qualifying session predominantly as a chance for the drivers to familiarise themselves with the car and the circuit as they did in free practice, and to simulate race conditions with full fuel loads in preparation for Sunday’s race.

The fastest drivers were awarded a prize money of 5,000 Australian dollars by the organizers. Audi race experience Team Joest and its drivers decided to donate the money to the people of their host country who have been affected by natural disasters recently. Audi Australia supported this move so that a total sum of 10,000 dollars was donated. The sum will be directed towards the Premier’s Disaster Relief Appeal that supports the victims of floodings and cyclone Yasi.

Romolo Liebchen (Head of customer sport, quattro GmbH): “We can be happy with our positions on the grid as it is the first time that we took to the track at Bathurst. We focused on first qualifying because we then expected the best results – this was precisely what happened. We’ve used second qualifying to prepare perfectly for the race. Each driver gave us a positive feedback on the set-up of the Audi R8 LMS.”

Ralf Jüttner (Technical Director Audi race experience Team Joest): “We came to Bathurst without even a shakedown test, plus the free practice sessions were very short. Our drivers either didn’t know the car or they didn’t know the track. Now we have ticked every box of a full program we had to go through. In second qualifying, we did our homework for Sunday and no longer fought for positions. Our six drivers did their best laps in the morning. That worked really well with every driver. We are well-prepared for the 12 hour race.”

Mark Eddy (Audi Australia R8 LMS #7)
“Working with Audi race experience Team Joest is great fun. After qualifying, we are starting to have a handle on what the car does at Mount Panorama. I’m sure that we should have a really good race car. Of course we want to turn this into a winning result on Sunday.”

Craig Lowndes (Audi Australia R8 LMS #7)
“It’s a great opportunity to have a new exposure to a new team. Audi came to Australia and are providing a first-class outfit – not only the garages but also the cars. And it’s good to see the support that Audi Australia has given to Audi race experience Team Joest. The circuit we love, but the car is not so familiar to me. Each time I get in the car, I get more comfortable. The 12 hour race will be a long day. It’ll be no different to any normal endurance race: look after the car, look after the fuel consumption and hopefully be on the lead lap at the end of the last hour.”

Warren Luff (Audi Australia R8 LMS #7)
“It’s been an amazing opportunity. The car has been so good to drive. In qualifying, I was very happy with the car and the time that we did. I’m very much looking forward to the race and hopefully we can have a good result for both Audi and Audi race experience Team Joest.”

Marc Basseng (Audi Top Service R8 LMS #8)
“We have used the first qualifying to achieve good times. In the second session it was all about longer distances. So we could see how the car’s temperatures progress and how the tires worked. So we have concentrated on race preparation as it is crucial to have a good car for that. I think that’s precisely what we’ve achieved. It is all the better that the qualifying result is that good.”

Christopher Mies (Audi Top Service R8 LMS #8)
“This is a nice result as Marc, Darryl and myself didn’t know the track at all. I’m very positive about it. We are an evenly-matched driver pairing. Hence we have a chance for a podium result. At the end, we’ve tried a harder tire compound under a full fuel load to generate reference data. Even then, I could drive consistent times which was a surprise. So we are well-prepared for the race.”

Darryl O’Young (Audi Top Service R8 LMS #8)
“I’m quite pleased with the way the weekend has evolved so far. It’s tough to learn the circuit with just two free practice sessions. Before qualifying, both Christopher and me each drove seven laps. Still, we were able to get decent times. What matters the most is the 12 hour race not the position on the grid. We want to drive a clean race and keep out of troubles in traffic. The team has been working really well and set the car up perfectly.”