Skip to content
We are using cookies for a better user experience.
08/26/19
Neuburg a. d. Donau
Sports 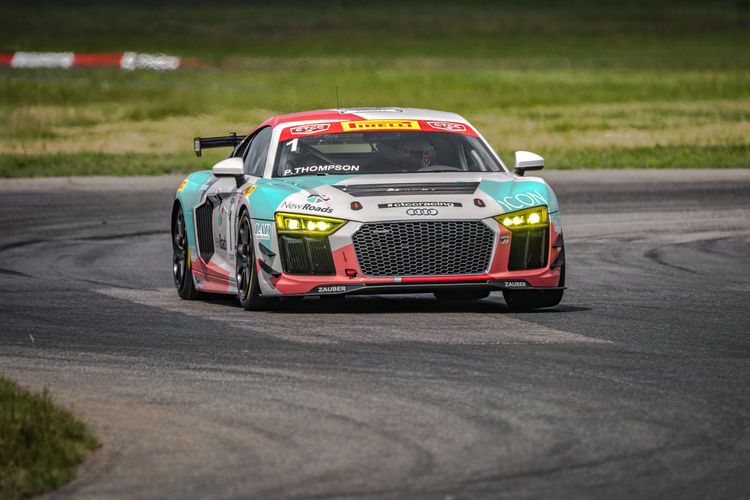 The Audi R8 LMS GT4 is leaving its mark on the racing scene in the north of the American continent. While Parker Thompson won the first title for the GT4 model from Audi Sport customer racing in Canada a driver pairing in the IMSA Michelin Pilot Challenge in another Audi R8 LMS GT4 extended its lead of the standings shortly before the end of the season.

First title in Canada: Audi Sport customer racing Canada has every reason to celebrate. Parker Thompson in an Audi R8 LMS GT4 of the Speedstar team won the GT Sport classification of the Canadian Touring Car Championship. The Canadian won his class in seven of the first eight races, scored a total of 936 points and, as a result, was out his rivals’ reach in the standings. After the Audi R8 LMS GT4 in its 2018 maiden season clinched a total of ten titles in America and Europe, the success in Canada marks the eleventh class win in just two years. In addition, the driver and team on clinching the first title in Canada made history in the worldwide track record of Audi Sport customer racing. In the finale at Mosport, Nathan Blok drove the Audi R8 LMS GT4 of the team and with victory in race one and second place in race two continued the Speedstar team’s string of success.

Lead of the standings extended: Team Carbahn with Peregrine Racing has enlarged its advantage at the top of the GS class in the IMSA Michelin Pilot Challenge. Tyler McQuarrie/Jeff Westphal had traveled to the eighth event in Virginia with an advantage of nine points. In the two-hour race, the driver pairing in an Audi R8 LMS GT4 only needed a second place with a half-second gap to enlarge its advantage in the championship to 24 points. As a result, with two events yet to be held, the Audi Sport customer team is among the absolute favorites for the title.

Class wins at the Slovakiaring: In round five of the Eset V4 Cup, several customers were successful with the Audi R8 LMS in sprint and endurance races. Marcin Jedlinski from Poland in an Audi R8 LMS from the Olimp Racing team in the one-hour race across the long distance achieved first place in his class and second overall behind a prototype. In the first sprint, the Slovak Christian Malcharek in his home round won the GT3 classification in front of Richard Chlad jr. in another Audi. The second sprint race saw another Audi one-two result in the GT3 classification by Marcin Jedlinski finishing in front of Richard Chlad jr.

Victories for Andrew Haryanto and Bhurit Bhirombhakdi: Two drivers shared the victories in the fourth event of the Audi Sport R8 LMS Cup. Andrew Haryanto won the first race at Suzuka in rain ahead of Alex Au and Bhurit Bhirombhakdi. In the second race, in brilliant sunshine, Bhirombhakdi prevailed against Haryanto while third place went to Yasser Shahin. The advantage of leader of the standings Shahin over Alex Au shrunk from 15 to eleven points in Japan. Consequently, at the finale in Malaysia in November, the top five drivers in the standings still have mathematical title chances. In addition, last year’s champion Haryanto enjoys a special award: he scored the largest number of points among all entrants at Suzuka, which has secured him a place in the cockpit of an Audi R8 LMS that will compete in the 10 Hours of Suzuka with the best Cup drivers from this season in exactly one year’s time. In the GT4 class, the Japanese Shozo Tagahara in his Cup debut celebrated a class win in both rounds with the Audi Team AS Sport.

Paul celebrates double victory: Maximilian Paul was the dominant driver on the fourth race weekend of the Audi Sport Seyffarth R8 LMS Cup at the Lausitzring. In his first commitment in the GT4 one-make cup in the current season, the merely 19-year-old up-and-coming driver had started both races from pole position and in his Audi R8 LMS GT4 scored victory twice in front of Rahel Frey. Current champion Kris Heidorn, who also competed in the Cup for the first time in the 2019 season, on finishing the second race in third place, achieved a podium finish, too. With a third and fourth place at the Lausitzring, Robin Rogalski defended the lead in the drivers’ classification.

Victory in chaotic race: Team Fast MD Racing celebrated its first victory with the Audi RS 3 LMS in the TCR class of the IMSA Michelin Pilot Challenge. After a thunderstorm had previously caused qualifying to be canceled, changeable weather also marked the race in Virginia and led to numerous interruptions. During a safety car period, all competitors switched to rain tires. Only Nick Galante in his Audi from Fast MD Racing stayed on slicks and subsequently lost ground on a wet track. About halfway through the two-hour race, the opponents switched to slicks again. In the last 25 minutes, rain led to three more safety car deployments. When race control released the round for a last remaining lap Galante’s teammate James Vance took the lead and won, marking the second victory this season for the Audi RS 3 LMS. Third place went to Michael Johnson/Stephen Simpson from JDC-Miller Motorsports in another Audi. After eight of ten rounds, Gavin Ernstone/Jon Morley in the fourth spot remain the best Audi drivers.

Trophies for three Audi drivers: Three different drivers of the Audi RS 3 LMS returned from the finale of the Canadian Touring Car Championship at Mosport with trophies. Jean-François Hevey, in race one, achieved third place in the TCR classification for the TRC/M1GT team. In the second race, his teammate, Matthew Taskinen, took second place in front of Travis Hill from Team TWOth Autosport. In the final championship classification of the class that, with twelve entrants, was well-filled, Jean-François Hevey finished runner-up, trailed by three other drivers of an Audi RS 3 LMS, Travis Hill, Matthew Taskinen and Ron Tomlinson from TWOth Autosport.