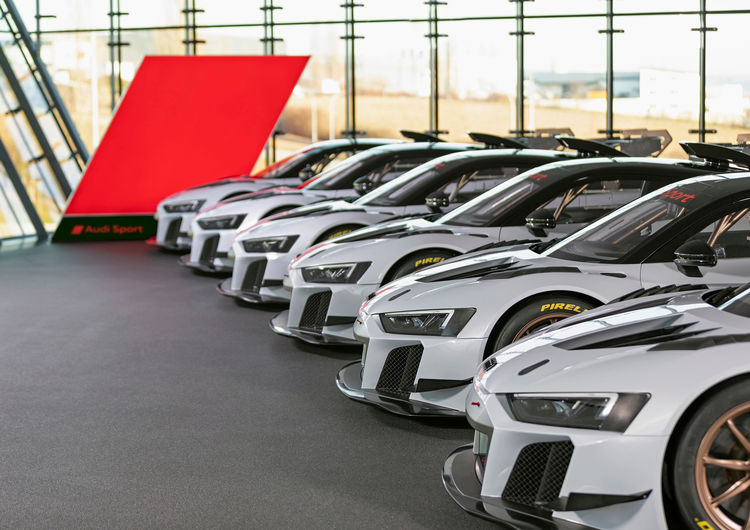 “With the Audi R8 LMS GT2 we’re opening up a new chapter in our history,” says Chris Reinke, Head of Audi Sport customer racing. “Starting in 2020, the GT2 class will enhance the world of GT racing by another valuable new category that immediately got a foothold on three continents. In addition, the race car is ideally suited for track days. In spite of its very specific concept design there are many things it has in common with the production model. They allow us to closely integrate the manufacturing process, which we are very proud of.”

Delivering output of 470 kW (640 hp), it is the most powerful model ever to have been offered by Audi Sport customer racing. In manufacturing, there are significant synergies between it and the Audi R8 Spyder V10 performance quattro production model (combined fuel consumption l/100 km*: 13.3; combined CO2 emissions: 301): The race car is largely produced at Böllinger Höfe at the Neckarsulm location. Only the operational pre-delivery preparation is performed by Audi Sport customer racing at the Heilbronn district of Biberach. Customers receive the race car in Suzuka-Gray including the tapered black glossy roof that is characteristic of the GT2 version.

The car, which is available ready to race from 338,000 euros (excluding VAT), can be fielded in the GT2 Sports Club America, the GT2 Sports Club Europe and the GT2 Sports Club Asia starting in 2020. These racing series specifically address gentleman drivers who appreciate the race car’s high longitudinal dynamics. Additional fielding opportunities are opening up in the growing segment of track days and race resorts, which are attractive particularly for the owners of high-performance sports cars.

* Fuel consumption, CO₂ emissions and efficiency classes given in ranges depend on the tire/wheel sets used

(Fuel consumption, CO₂ emissions and efficiency classes given in ranges depend on the tire/wheel sets used)

We are currently still required by law to state the NEDC figures. In the case of new vehicles which have been type-approved according to the WLTP, the NEDC figures are derived from the WLTP data. It is possible to specify the WLTP figures voluntarily in addition until such time as this is required by law. In cases where the NEDC figures are specified as value ranges, these do not refer to a particular individual vehicle and do not constitute part of the sales offering. They are intended exclusively as a means of comparison between different vehicle types. Additional equipment and accessories (e.g. add-on parts, different tire formats, etc.) may change the relevant vehicle parameters, such as weight, rolling resistance and aerodynamics, and, in conjunction with weather and traffic conditions and individual driving style, may affect fuel consumption, electrical power consumption, CO₂ emissions and the performance figures for the vehicle.

Further information on official fuel consumption figures and the official specific CO2 emissions of new passenger cars can be found in the “Guide on the fuel economy, CO2 emissions and power consumption of all new passenger car models,” which is available free of charge at all sales dealerships and from DAT Deutsche Automobil Treuhand GmbH, Hellmuth-Hirth-Str. 1, 73760 Ostfildern, Germany, or under www.dat.de.