Skip to content
We are using cookies for a better user experience.
10/21/20
Spa/Neuburg a. d. Donau
Sport 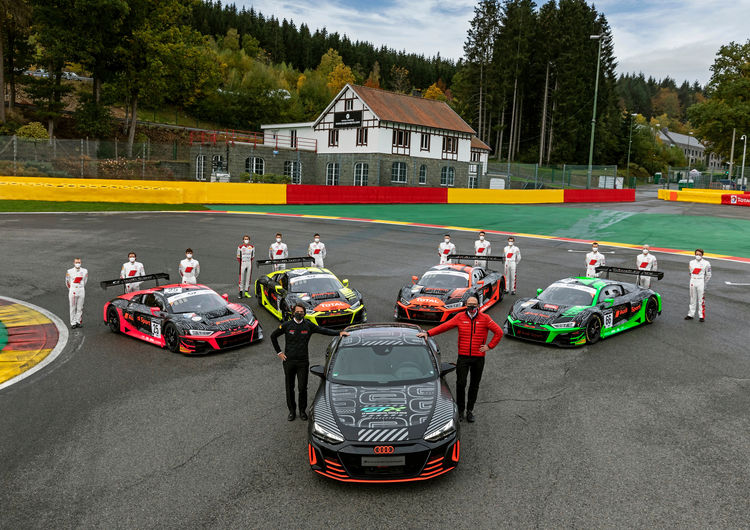 They both originate from Neckarsulm, they embody the fascination of sports cars of today and tomorrow, and they reflect the whole passion with which Audi develops and builds cars: The successful GT3 racing car Audi R8 LMS and the new Audi RS e-tron GT prototype meet for the first time at the world’s largest GT3 racing event, the Spa 24 Hours.

“The Audi R8 and the RS e-tron GT prototype with its expressive design stand for sportiness in the present and the future, both on the road and in racing,” says Chris Reinke, Head of Audi Sport customer racing. “The fascinating Audi RS e-tron GT prototype is the ideal basis for a promising concept with electrified drives in GT racing, as announced by the Stéphane Ratel Organisation with the GTX World Tour.” Under the umbrella of this racing series, different alternative drive systems are to compete in multidisciplinary competitions in the future. The rules are designed so that the fastest and at the same time most efficient car wins.

“The Audi RS e-tron GT prototype is the first all-electric high-performance model from Audi and the next icon in the RS model portfolio,” says Rolf Michl, Director Sales & Marketing Audi Sport GmbH. “With it, we are heralding a new era of the two letters RS at Audi.” The Audi RS e-tron GT prototype gives a glimpse of the derivatives of the brand’s first all-electric model series which rolls off the production line in Germany at the Audi Böllinger Höfe site in Neckarsulm. The small-series production facility, where the Audi R8 has been built up to now, has been expanded, upgraded and converted for its new task. The integrated assembly of two cars with completely different drive technologies on one line is unique in the Volkswagen Group.

Based on the standard R8, Audi Sport customer racing has been building the GT3 racing car in the second generation since 2009, as well as other racing derivatives. 50 percent of the assemblies of the model, which will fight for the fifth overall victory in Spa this coming weekend, come from series production. Before the starting flag drops at 3.30 pm on Saturday, the Audi RS e-tron GT prototype will lead the field of the 24-hour race into the formation lap – and GT racing into an exciting future.