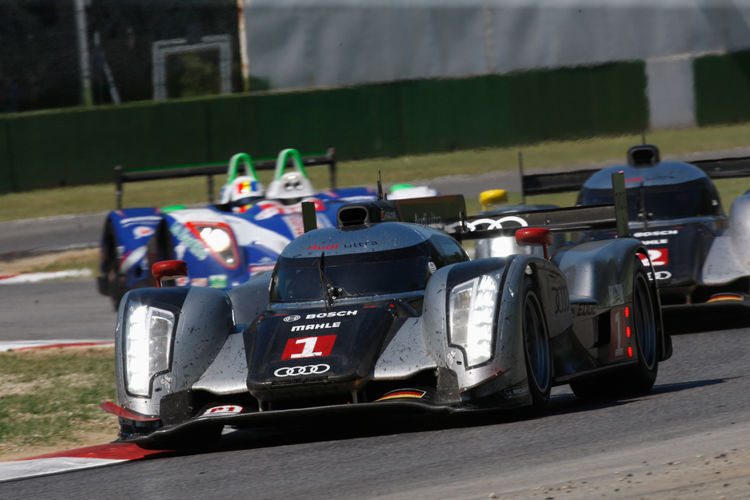 Audi Sport Team Joest finished the round of the Intercontinental Le Mans Cup (ILMC) at Imola, Italy, in third and fourth place. Only three weeks after Audi’s victory at Le Mans Marcel Fässler and Timo Bernhard took third place in the #1 Audi R18 TDI at the six-hour race near Bologna. Their team-mates Allan McNish and Tom Kristensen in the diesel sports car designated as number “2” finished the fourth ILMC round on position four.

Le Mans winner Marcel Fässler, who had captured a position on the front row of the grid by taking second place in qualifying, defended his place at the beginning of the race. Allan McNish, who drove the #2 R18 TDI at the start, was running in fourth place at the beginning of the race. Both cars continually lost time due to many lapping events in heavy traffic in the field of 48 vehicles. After the first pit stops, 47 minutes into the race, the two Audi R18 TDI cars were on positions three and four.

On the tradition-steeped track at Imola Audi had used the aerodynamics package for the first time that has been updated for the remaining ILMC races. The latest specification of the prototype with a power output of more than 540 hp has higher downforce compared with the Le Mans configuration. But contrary to expectations, the squad from Audi Team Joest was not able to bring the advantage of the high-downforce version to bear in Italy. Due to rubber pickup on the track the front brakes became dirty and overheated. Consequently, a higher amount of balance had to be shifted to the rear brakes which impaired the balance of the whole car and made both vehicles more difficult to drive. In addition, the removal of the dirt from the brake cooling system cost valuable seconds at each pit stop.

Both driver pairings experienced a race without driving mistakes and technical defects at Imola. One hour before the race ended the two Audi R18 TDI were only separated by tenths of a second and showed a thrilling team-internal duel.

After six hours of racing and 219 completed race laps Marcel Fässler and Timo Bernhard on their first joint run in the Audi R18 TDI crossed the finish line in third place with a one-lap gap to the overall winners, Sébastien Bourdais/Anthony Davidson. Le Mans record winner Tom Kristensen, who ran at Imola for the first time, together with the Scotsman Allan McNish had to admit defeat in the battle for third place by merely 2.634 seconds.

Dr. Wolfgang Ullrich (Head of Audi Motorsport): “We’re not happy with the result at Imola. We had an inconsistent performance. At the beginning of the race we were in contention, but then lost ground about halfway into the race which we weren’t able to make up in the end. It was the first time that we were running with this vehicle configuration in such high temperatures. Now we want to use the findings from Imola to fight for victory at Silverstone.”

Timo Bernhard (Audi R18 TDI #1): “It was an interesting race for us. It was important to us not to have problems in traffic and not to get stuck anywhere. We pushed during the whole race. At first Marcel and I were looking strong, particularly Marcel in the beginning. But during the race the track temperature kept rising. To make things worse, a lot of dirt and rubber pickup settled in the brake cooling system, which caused the brake temperature to rise and we had to clean the cooling system at each pit stop. We had to shift the brake balance very far to the rear – that changed the whole car. That’s a shame but we’ll strike back. Third place was all we could squeeze out of the situation today.”

Marcel Fässler (Audi R18 TDI #1): “This was a difficult race for us. Particularly the traffic was really difficult. Everyone gave their maximum. In the end the race became really thrilling because Timo had a slow puncture on our Audi in the final phase and had to have the left rear wheel changed. That was a tough moment for us in our battle for third place. It was great that in the end we still managed to take a podium place.”

Tom Kristensen (Audi R18 TDI #2): “None of us can be happy today. This was my first visit here. I like Imola, but didn’t think the race was good. We didn’t show a good performance. We had problems because the brakes got dirty. The brake temperature went up, which made the car hard to drive. The battle with Timo at the end was good fun. But you had to watch out because there was a lot of traffic. That was a real challenge, I gave everything in the final turns but it wasn’t enough. Congratulations to Timo and Marcel. And ‘well done’ to Peugeot. But if you know Allan and me, then you know that we want to strong at Silverstone.”

Allan McNish (Audi R18 TDI #2): “After the Audi victory at Le Mans this was a disappointing result for us. The Audi R18 TDI was running well and reliably. But we weren’t fast enough in traffic. And here it was all about traffic. With 48 vehicles on the track you’ve got to be able to quickly pass the other cars on a line when lapping. In traffic the Peugeot cars always managed to achieve an advantage.”

Ralf Jüttner (Technical Director Audi Sport Team Joest): “The race didn’t go the way we’d been hoping it would. In the beginning, things were still looking pretty good. But then we caught a lot of dirt in the front brake cooling system and had to clean it at each pit stop. In addition, we had to shift the brake balance to the rear. That heavily influenced the balance of the whole car. All four drivers reported that this made the cars hard to drive. Congratulations to Peugeot; they did a good job here.”