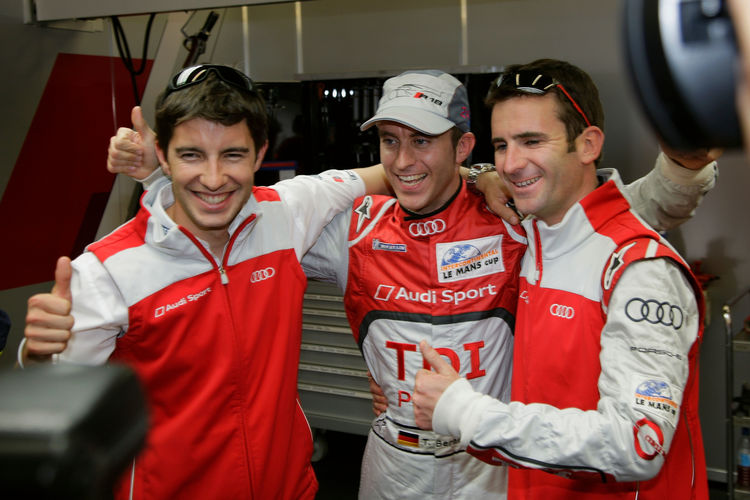 First race, first pole position: In qualifying for the 1000-kilometer race at Spa the new Audi R18 TDI has confirmed the strong impression it made two weeks ago during the test day at Le Mans. By clinching positions one, two and three Audi Sport Team Joest achieved a perfect qualifying result.

As early as in the three free practice sessions on Thursday and Friday the innovative LMP1 sports car, which turns Audi’s ultra lightweight technology into a visual experience, had been the dominant vehicle at the top of the time sheets. In qualifying Timo Bernhard in the black Audi R18 TDI designated as car number “1” then managed the fastest lap. Setting a time of 2m 01.502s he relegated his team-mates André Lotterer and Tom Kristensen to positions two and three by a narrow margin.

By starting from the pole position at its first race the Audi R18 TDI continues the tradition of the particularly successful predecessor models, R8 and R10 TDI, which had captured the top position on the grid on their debut as well (Frank Biela in 2000 at Sebring in the R8 and Allan McNish in 2006 in the R10 TDI). AUDI AG subsequently went down in Le Mans history with both sports prototypes.

The qualifying session at Spa-Francorchamps, however, did not provide a real clue about where the contenders stand. The session, which had originally been scheduled for 20 minutes, ended early after 14:06 minutes due to an accident which had severely damaged the guard rails. Not all of the top teams had completed their fast laps by that time. As the free practice sessions had already seen numerous incidents and red flags Audi Sport Team Joest sent its three Audi R18 TDI cars on the time chase right at the beginning of the qualifying session– a decision that proved to be strategically correct and earned Audi the top three grid positions.

The second round of the Intercontinental Le Mans Cup (ILMC) starts on Sunday at 14:05 hrs and lasts a maximum of six hours. Eurosport 2 will broadcast live from 14:00 hrs to 17:30 hrs (local time) from Spa-Francorchamps, Eurosport will cover the final phase from 17:30 hrs to 20:00 hrs.

Dr. Wolfgang Ullrich (Head of Audi Motorsport): “This is a nice reward for the work done over the past few months and a great beginning for our new Audi R18 TDI. Unfortunately, we couldn’t see the level of our rivals’ potential because qualifying was stopped early due to an accident. The result provides good motivation to the squad. It’s not that important at a 1000-kilometer race but it’s a nice omen.”

Timo Bernhard (Audi R18 TDI #1): “I’m incredibly happy about the result, particularly for the team. We did carry quite a big burden because every new car at Audi has immediately been successful. I think we’ve squeezed out the maximum today. That I had the good fortune of clinching the first pole position in the Audi R18 TDI fills me with pride.”

Romain Dumas (Audi R18 TDI #1): “This was a great qualifying result: positions one, two and three for Audi! Naturally, I’m particularly happy that number ‘1’ is on pole. We’ve been showing a good performance throughout the weekend. At a six-hour race the position you start from is not so important. But it’s always better to be in front. The race will be very long. We’ve got to continue to work the way we have so far.”

Mike Rockenfeller (Audi R18 TDI #1): “The timing in qualifying was perfect. Timo (Bernhard) nailed it down on the lap and also had that bit of necessary luck with traffic. We’re happy. But of course we all know that this was just qualifying. Tomorrow will be the day that counts. Still, it’s always nice to be on pole. And I believe we’ve got a good car.”

Marcel Fässler (Audi R18 TDI #2): “I’m very pleased with the way things have been going the past two days. Actually, an Audi has always been at the top of the list. Coming out of qualifying with one, two, three is fantastic of course. I’m very happy, also for the team. We’ve got a competitive car. The grid positions confirm that. I’m excited about the race tomorrow.”

André Lotterer (Audi R18 TDI #2): “A superb result for the entire squad: Audi one, two, three – perfect! We did a fantastic job, the car works very well. Personally, I’d have linked clinching pole myself. Unfortunately I hit traffic on both of my trials in the last turn. That’s why I’m afraid it didn’t work out. But the potential was there, and that’s the most important part about it. Tomorrow is an important day to prepare ourselves for Le Mans – and to hopefully win the race as well.”

Benoît Tréluyer (Audi R18 TDI #2): “At the moment things are looking great for us. We’re on the top three grid positions and have a car that’s good to drive. The prospects for the race are good too.”

Dindo Capello (Audi R18 TDI #3): “That was an outstanding qualifying session for us. It’s been a while that we’ve had three Audi cars at the very front – that’s a very good feeling. Tom (Kristensen) drove the smallest number of laps before qualifying. That certainly counts when you’re fighting for tenths. We’re all looking forward to the race. We feel comfortable in the car and are able to attack. But the race is long and we know that a lot can happen.”

Tom Kristensen (Audi R18 TDI #3): “The practice sessions and qualifying were pretty unusual. Everyone first had to get used to 55 vehicles being on the track. The result was many red flags. Audi 1-2-3 is a wonderful result for everyone who is part of the team and for all Audi fans around the world. This morning I had only two timed laps. Qualifying went well nonetheless until I hit traffic in the last chicane after Blanchimont. That’s why I wasn’t able to improve any more. Then the red flag came. But we’ve got a car in which we’re looking forward to contesting a 6-hour race – I think I’m just as hot about driving the R18 TDI in a race for the first time as Allan (McNish), Dindo (Capello) and the other drivers.”

Allan McNish (Audi R18 TDI #3): “1-2-3 on the grid is an excellent result and a first reward for all the hard work Audi has been putting into this project over the past few months – during all the tests but also this weekend. Of course the red flag mixed up the grid a bit. But these things can happen if you don’t go out on track early. The engineers have done a pretty good job with the set-up. We’ve got a well-balanced car now. And we’re going into the first race of the Audi R18 TDI with a 1-2-3 on the grid – I don’t think there’s a better place to start.”

Ralf Jüttner (Technical Director Audi Sport Team Joest): “We still don’t know how the relative strengths of the field actually pan out. We’ve seen yet again that our strategy of always going out early is right. All three cars did good laps. It’s a great sight having all three cars in front: A superb team result and a good start for the Audi R18 TDI. I’d like to really thank the squad: The past few weeks have been rough. The result today is a small reward. I’m hoping for things to continue like this tomorrow.”