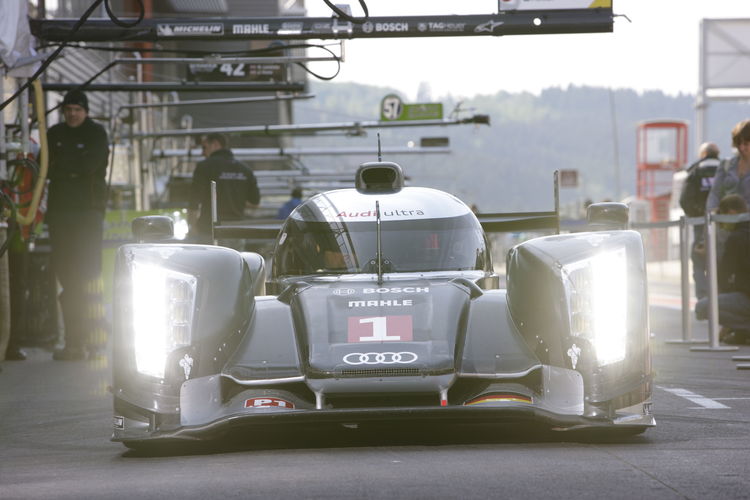 Always be at least one step ahead of the opposition – this is Audi’s motto. This is exactly how the Four Rings brand presented the Audi R18 TDI – the first Le Mans sports car featuring headlights comprising entirely of light emitting diodes. As a result, the Audi drivers have a significant advantage at night during the 24 Hours of Le Mans.

Audi is regarded as a pioneer in the development of LED technology and leads the competition by a large margin in this field. The twelve-cylinder Audi A8 was the first car in the world to go into production with LED daytime driving lights. The Audi R8 is credited with having the first full LED headlights worldwide. Slowly but surely an increasing number of Audi models are offered with full LEDs as an option, as is the new Audi A6.

Audi also forces the new headlight technology in motorsport. The Audi R10 TDI was the first race car with LED daytime driving lights in 2006. The Audi R15 TDI, which broke the 39 year old distance record at the 24 Hours of Le Mans last year, was equipped with a combination of Xenon headlights and LEDs.

“When you’ve driven once with full LED headlights you don’t want to have anything else,” raves Le Mans record winner Tom Kristensen. “The light is stronger and vibrates less than a normal headlight – this is a clear advantage and particularly at Le Mans, a track that has many dark braking points in the night.”

However, not only the greater illumination is an advantage of LED technology. Light emitting diodes are maintenance free and extremely reliable. “The vulnerability to failures is extremely low,” explains Dr. Martin Mühlmeier, Head of Technology at Audi Sport. “To date, we haven’t had a single LED failure.”

Thanks to intensive development of the technology, full LED headlights now also represent a weight saving compared to common headlights – particularly as Audi Sport managed to eliminate the electrical cooling of the light emitting diodes still required in street cars and also found last year in the R15 TDI.

The LEDs in the R18 TDI are cooled by the airflow and still supply enough light even if the cooling airflow is completely cut by dimming themselves automatically. “Our colleagues in production car development are very interested to see how we implement this,” says Christopher Reinke, Technical Project Leader for the Audi R18 TDI. “However, we have the advantage in motorsport that the car spends less time at a standstill. On the highway, the lights mustn’t go out even if the car is in a traffic jam.”

Audi Sport worked closely with the AUDI AG “Light and Sight” section during development of the full LED headlights. The light tunnel in the Technical Development (TE) is available for tests. The Audi R18 TDI is credited with a record: It has the brightest diodes currently in use. These LEDs are currently not registered for road use.

To a limited extent LED technology also requires a completely new approach. The R18 TDI prototype’s main beam, which is comprised of five LEDs per side, is not brighter than the normal low beam. Three extra LEDs create the effect of a high beam by illuminating the track additionally through an individual position of the various reflectors.

Audi is the first automobile manufacturer to also use the diverse possibilities of light emitting diodes as design element.  In the R18 TDI the daytime driving light in the left headlight forms a number “1” which is mirrored on the right side. With this, Audi aims to express its position as number one in LED technology. It goes without saying that the knowledge Audi Sport gains at Le Mans with the latest generation full LED headlights flows automatically into production car development – so that the advantage through LED technology remains.