Meet the next generation of e-mobility. More than a car, the Audi A6 e-tron concept is a vision of the future. From elegant proportions to state-of-the-art lighting, Philipp Römers, Head of Exterior Design, talks about the innovative engineering and pioneering design that makes this concept car a step into tomorrow. #Audi #A6e-tronConcept #FutureIsAnAttitude #emobility
YouTube 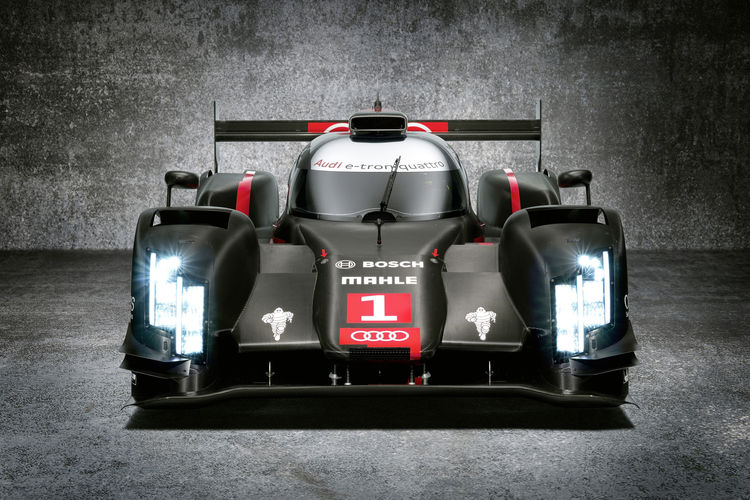 At the world premiere of the new Audi R18 e-tron quattro, Audi unveiled another technical highlight of its new LMP1 sports car in Ingolstadt on Wednesday night. In 2014, the brand with the four rings will be running with laser light for the first time in the Le Mans 24 Hours and in the FIA World Endurance Championship (WEC).

“By using this new lighting technology Audi is setting yet another milestone at Le Mans,” said Dr. Ulrich Hackenberg, Member of the Management Board for Technical Development of AUDI AG, at the official presentation of the new R18 e-tron quattro that took place as part of the ‘Audi Sport Finale.’ Laser light will also open up completely new possibilities for our production models in the future. Once more, motorsport at Audi accelerates a new technical development for our customers.”

The innovative laser light, which about 500 guests in attendance at the ‘Audi Sport Finale’ had the chance to experience live for the first time, complements the main LED headlights of the new Audi R18 e-tron quattro. A blue laser beam backlights a yellow phosphorus crystal lens through which the light beam is then emitted. This new light source provides even more homogenous lighting of the road.

Laser light just one of numerous innovations of the new R18

“The new laser light is just one of numerous technical innovations featured by our new R18,” said Head of Audi Motorsport Dr. Wolfgang Ullrich, who was recognized by Dr. Ulrich Hackenberg on Wednesday night on the occasion of his 20th anniversary at the helm of Audi Sport. “We’re not going to reveal any more than that at this early stage, as in 2014 we’re facing an extremely tough competition and a year full of challenges for Audi Sport.”
As before, the motorsport commitment of AUDI AG in the new season will continue to consist of the three pillars Le Mans prototypes (LMP1), DTM and GT sport. In addition, Audi Sport is preparing for its move into the new Motorsport Competence Center in Neuburg in the summer of 2014. “This is a very important step to ensure that Audi will retain its ability to be successfully active in motorsport at the highest level but, obviously, it also puts an additional strain on our squad,” said Dr. Ullrich.

The FIA World Endurance Championship (WEC) will see Audi Sport Team Joest compete as the title defender in the 2014 season. In all eight races of the 2014 WEC, the World Champions will be running with two Audi R18 e-tron quattro cars. For the season’s pinnacle event at Le Mans on June 14/15, 2014, the fielding of a third R18 is planned. The driver teams will be announced at a later date.

In the DTM, Audi will continue the successful long-standing partnership with the Audi Sport Teams Abt Sportsline, Phoenix and Rosberg. For the 2014 season, a new version of the Audi RS 5 DTM that was victorious in the DTM in the past season is in the making at Audi Sport. Mike Rockenfeller, as the title defender, in car number ‘1,’ will definitely be driving one of the eight RS 5 DTM cars to be fielded in total. Assignments for the other cockpits and the distribution to the three teams have not been finalized yet.

In GT sport, Audi Sport customer racing will again be providing particularly intensive support to its customer teams for the 24-hour races at Daytona (USA), the Nürburgring (Germany) and Spa-Francorchamps (Belgium).

GTD version of the Audi R8 LMS for U.S. racing

Following the merger of the GRAND-AM and the American Le Mans Series into the Tudor United SportsCar Championship (TUSCC), a new chapter will begin in U.S. racing. Based on the previous race car for the USA, Audi has developed a GTD version of the R8 LMS, with GTD standing for ‘GT Daytona.’ The GTD version now only differs from the GT3 model in few details.

The Audi R8 LMS Cup in its third season is taking the next step in its internationalization effort in the Asian region. In 2014, aside from three races in China – among others, held in conjunction with the WEC at Shanghai and the DTM at Guangzhou – the world’s first one-make cup of AUDI AG will take place in Malaysia, in South Korea and, for the first time, in Japan. Following the fielding of 16 race cars in the inaugural season and 20 last year, Audi China is planning to put up to 24 Audi R8 LMS cars on the grid.

The extensive motorsport commitment of AUDI AG is complemented by the offer of the Audi race experience, which gives customers with sporting ambitions the opportunity to personally drive the Audi R8 LMS ultra. In addition to individual training sessions, the Audi race experience offers racing commitments in the VLN Endurance Championship and in the 24-hour race at the Nürburgring. The three-time Le Mans winner Marco Werner, the former DTM race driver Rahel Frey and the former 24-hour Nürburgring winner Markus Winkelhock will be passing on their knowledge as instructors.