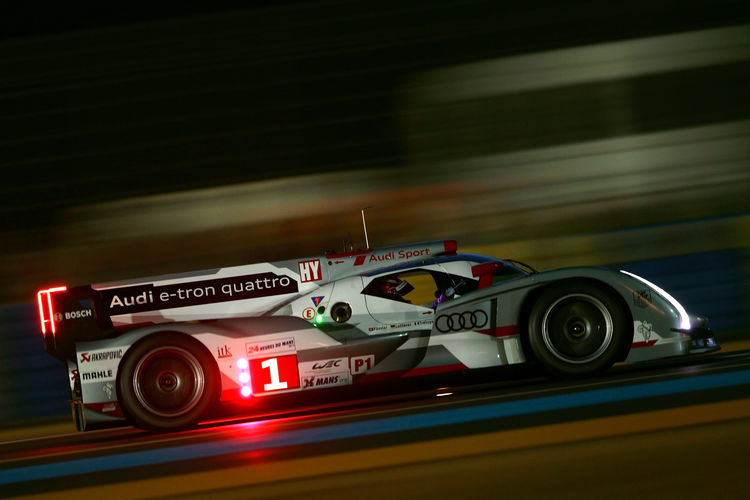 After the first qualifying session for the 80th running of the Le Mans 24 Hours a car with hybrid drive is at the front of the field for the first time in the history of the endurance classic: the new Audi R18 e-tron quattro.

Last year’s winner André Lotterer in the diesel hybrid designated as car number “1” set a time of 3m 25.453s in the first qualifying session shortly after midnight, beating last year’s pole position time by 285 thousandths of a second. The result of Le Mans record winner Tom Kristensen, who posted the second-fastest time at the wheel of the number “2” R18, caused both diesel hybrid sports cars from AUDI AG to provisionally occupy the front row of the grid. After the first qualifying session, the two R18 ultra cars are on positions three (car number “3”/Loïc Duval) and five (car number “4”/Mike Rockenfeller).

As usual, on the first practice day Audi Sport Team Joest concentrated on preparing for the race, tire tests and fine-tuning the cars based on the data gathered on the test day. As early as in free practice, André Lotterer – at 3m 25.163s – was clearly below the pole position time set last year. This best mark was not achieved in qualifying at night in cooler temperatures and on a more slippery track.

All twelve Audi racers completed the mandatory laps at night which are prescribed for qualifying. The four Audi R18 cars were running without any technical problems and reeled off a total of 330 laps. Before the final qualifying session on Thursday night, the cars will be completely prepared again from scratch and fitted with the engines and components intended for the race. The ultimate decision of the grid positions will be made on Thursday night from 1900 to 2100 hrs and from 2200 to 2400 hrs.

Last year, Benoît Tréluyer clinched the top spot on the grid for Audi 30 minutes before the end of the final qualifying session on Thursday night. Audi has so far started from the pole position six times at Le Mans and has won the French endurance classic as many as ten times since 2000.

“It was incredibly difficult to find a free lap,” said Mike Rockenfeller, who drove at Le Mans for the first time again after his serious accident a year ago and lost more than a second behind a slower GT car on his fastest lap. “Of course that was a shame – but it’s a lot more important that our car felt very good in the end and was comfortable to drive. That’s what counts at Le Mans.”

“On the whole, we had a very productive day,” said Head of Audi Motorsport Dr. Wolfgang Ullrich. “Finding a good set-up for the unusually cool temperatures in the night session wasn’t easy because the grip level on the track was pretty low. In the end, we managed that quite well on new tires. I do think, though, that even faster times will be driven tomorrow. But we’re fully concentrating on the race anyway because the pole position is not of decisive importance for the outcome of the race at Le Mans.”