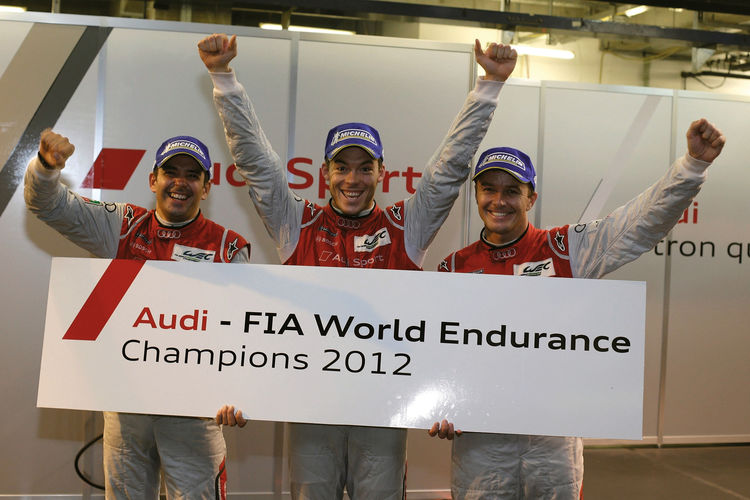 In the Manufacturers World Championship of the FIA World Endurance Championship (WEC) Audi had been out of reach by its competitors since August. At the finale at Shanghai, the Audi factory drivers Marcel Fässler/André Lotterer/Benoît Tréluyer, who finished in third place, won the Drivers’ World Championship as well – subject to the official publication of the results by the FIA. The second title crowns a successful debut season of the first hybrid sports car from Audi.

Audi has shaped the new FIA World Endurance Championship (WEC) not only by winning both titles. Five times, the team secured the top spot on the grid and on five occasions in eight events, an Audi R18 achieved overall victory – including the brand’s eleventh success at the Le Mans 24 Hours where the Audi R18 e-tron quattro clinched the first ever victory of a hybrid sports car in this classic endurance event.

An intensive duel with Toyota marked the second half of the season – including the finale in China. The new World Champions in the number “1” hybrid sports car only had to take third place at the Shanghai 6 Hours to win the title. Their lead in the standings now amounts to 13.5 points. The driver trio secured three single wins this season and completed their tally with three second places.

Second place in the championship goes to an Audi squad as well. Tom Kristensen/Allan McNish, who had started from the front row in China, finished the race as the runners-up behind the Toyota of Nicolas Lapierre/Alexander Wurz. The Danish-Scottish duo’s track record this season reflects seven podium positions, including victory at the season opener, the Sebring 12 Hours, together with Dindo Capello. In addition, they were the most efficient combination in the field. At seven of the season’s eight rounds, the Michelin Green X Challenge Award went to car number “2.”

The title win with the R18 e-tron quatto in China completes a unique endurance racing season for Audi. With the R8 LMS GT3 sports car, Audi decided the Bathurst 12 Hours and the 24-hour races at the Nürburgring, Spa and Zolder in its favor this year.

Dr. Wolfgang Ullrich (Head of Audi Motorsport): “It’s nice that after the Manufacturers’ World Championship we were able to decide the Drivers’ World Championship in our favor as well. Unfortunately, we weren’t able to finish the year with a victory in China. We’ve got very strong competitors, which provides us with high motivation to work hard for next year.”

Ralf Jüttner (Technical Director Audi Sport Team Joest): “Now we’ve won all the titles. Well done to Marcel Fässler, André Lotterer and Benoît Tréluyer. Tom Kristensen and Allan McNish came back with a strong showing in China even though it wasn’t enough for victory. Both squads performed flawless pit stops at the end of a tough season. The WEC is a fantastic new championship and we’re the first to have won it.”

Tom Kristensen (Audi R18 e-tron quattro #2): “This track suited our Japanese competitors particularly well. Congratulations to them on winning the race! At the same time, I’m happy about a good race by Allan, our team and me. There were two reasons why we didn’t have a chance of achieving the title win. Our rivals in the battle for the title were driving an Audi as well, and these cars simply don’t fail. Marcel, André and Ben truly deserve the title with their performances.”

Allan McNish (Audi R18 e-tron quattro #2): “Second place was the best we could achieve today. We squeezed the maximum out of the car and the tires but Toyota was simply quicker. Congratulations to Marcel, André and Ben on winning the World Champion’s title. They were incredibly good. We compete against each other but work together as a team.”

Marcel Fässler (Audi R18 e-tron quattro #1): “I’d like to thank Audi very much because without this brand I could have never experienced a success like this. I’ve got tremendous team-mates and a top-flight team. The title means incredibly much to me. It’s a great feeling to be World Champion.”

André Lotterer (Audi R18 e-tron quattro #1): “Winning Le Mans and the World Champion’s title together is simply brilliant. And I’m happy to be able to share this success with Marcel and Ben. The three of us are really good friends. A huge thank you goes to Audi and to our team. Our car was always superb. Unfortunately, we didn’t manage to take victory today but after winning the title we can be very pleased.”

Benoît Tréluyer (Audi R18 e-tron quattro #1): “I’m more than happy after this great season. The World Champion’s title is a nice chapter in a driver’s biography. I want to thank Audi very much for the good season.”