Skip to content
We are using cookies for a better user experience.
07/22/19
Neuburg a. d. Donau
Motorsport 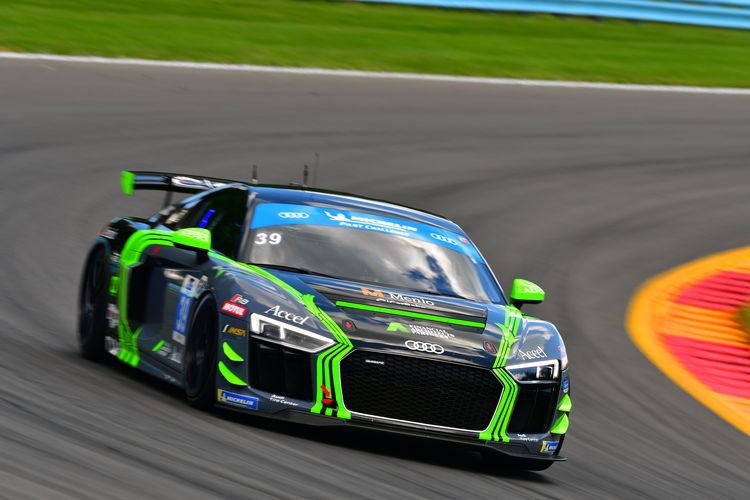 After the sixth of ten rounds, Audi Sport customer racing for the first time took the lead in the hard-fought GS class of the IMSA Michelin Pilot Challenge with Team Carbahn Motorsports and drivers Tyler McQuarrie/Jeff Westphal.

Audi drivers take lead of the standings: Round six of the IMSA Michelin Pilot Challenge ended in a photo finish. On the track at Lime Rock in the U.S. state of Connecticut, Tyler McQuarrie/Jeff Westphal in an Audi R8 LMS GT4 crossed the finish line in second position after two hours of racing. Following a caution period 45 minutes before the end, Westphal had reduced a deficit of seven seconds to just 0.377 seconds. Consequently, the two Americans from the Carbahn Motorsports team took the lead of the GS class drivers’ standings for the first time this season while Carbahn Motorsports is leading the teams’ classification.

Second podium finish this season: Audi Sport Italia achieved third place on the third sprint race weekend in the Italian GT Championship on Saturday. From fifth on the grid, Pierre Kaffer initially lost one position but fought back to his original spot. Following the driver change, his teammate, Andrea Fontana, rejoined the race in fourth position and in an amazing maneuver on the 20th of 28 laps advanced to third place. As a result, the Italian and his German teammate scored a podium finish again for the first time since the season opener. A puncture on Sunday seven laps before the end of the race prevented a similarly good result.

Class victory at Autopolis: Team Z-Rex Advics R8 Tracy won its class in round four of the Japanese Super Taikyu Series at Autopolis. Jeffrey Zee/Jason Zhang/Leo Ye in an Audi R8 LMS saw the checkered flag in the ST-1 Cup class after nearly five hours of racing 17.3 seconds in front of the Porsche of their immediate rivals.

Podium at Most: In round four of the Carbonia Cup, Audi customer K&K Racing Team clinched a podium result. Richie Rich in an Audi R8 LMS ultra finished runner-up at Autodrom Most in the Czech Republic.

Second place for JDC-Miller Motorsports in America: After the JDC-Miller Motorsports team had celebrated its first victory this season in round five of the IMSA Michelin Pilot Challenge with Mikey Taylor/Britt Casey Jr., the next trophy followed just two weeks later. In the sixth race of the season at Lime Rock, paraplegic racer Michael Johnson together with Stephen Simpson claimed second position in an Audi RS 3 LMS. A year earlier, the pairing had won the TCR class in this round at Lime Rock. In the standings, Gavin Ernstone and Jon Morley from Team Roadshagger Racing by eEuroparts.com remain the best Audi privateer driver team in third position.

Close battle in Italy: Audi privateer Ermanno Dionisio together with Giacomo Barri just barely had to admit defeat in the TCR DSG Endurance racing series. After having won the preceding qualifying heat in an Audi RS 3 LMS, the two Italians were just 0.898 seconds short of claiming victory in the two-hour main race. In the overall classification of the racing series, both drivers improved to second position while Dionisio is leading the Gentleman classification ahead of 14 other drivers.

Two new TCR racing series in New Zealand: Audi Sport customer racing welcomes Team Track Tec Racing from New Zealand as a new customer to TCR racing. From 2020 on, New Zealand will have a sprint and an endurance racing series according to TCR regulations. On July 19, the team of Matt Waters and Carmen Doran based at Highlands Motorsport Park introduced itself to the audience with an Audi RS 3 LMS at the presentation of the new racing series during the CRC Speedshow in Auckland.