Audi one-two victory in the heat of Bahrain 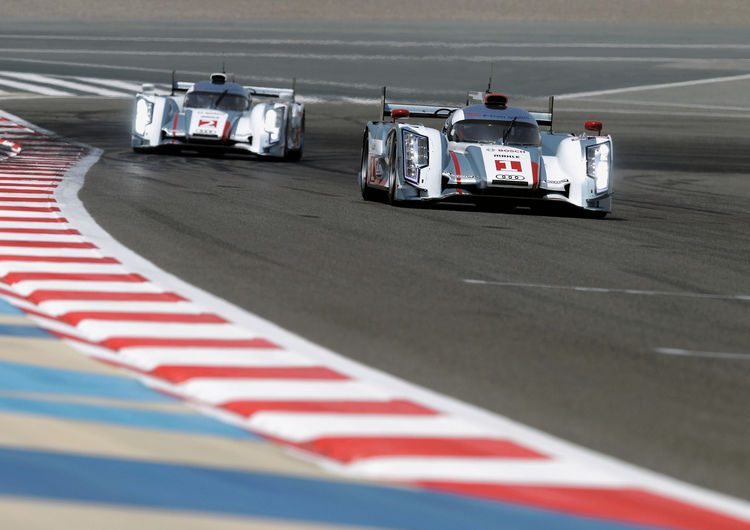 One-two success in the desert of Sakhir: Marcel Fässler/André Lotterer/Benoît Tréluyer in the Audi R18 e-tron quattro won the sixth round of the FIA World Endurance Championship (WEC) in Bahrain. The trio won the heat race in the Audi R18 e-tron quattro in front of the sister car of Allan McNish/Tom Kristensen.
Download PDF (171 KB)
Facebook
Twitter
LinkedIn
WhatsApp

One-two success in the desert of Sakhir: Marcel Fässler/André Lotterer/Benoît Tréluyer in the Audi R18 e-tron quattro won the sixth round of the FIA World Endurance Championship (WEC) in Bahrain. The trio won the race staged in hot weather conditions in their Audi R18 e-tron quattro ahead of the sister car. For Audi, this marked as many as five victories from six events.

It was the toughest 6-hour race of the year so far. At the beginning of the race, air temperatures were at 34 degrees with a track temperature of 45. The five drivers, the two hybrid race cars and Audi Sport Team Joest were exposed to extreme strains and showed flawless performances. The race that was started at 16:00 local time was predominantly held in the dark. In the end, Marcel Fässler/André Lotterer/Benoît Tréluyer enjoyed an advantage of one lap. The three Le Mans winners had started from position two and celebrated their third victory of the season after Le Mans and Silverstone.

The second Audi R18 e-tron quattro had every chance of clinching victory as well. Allan McNish defended the lead in the early phase after having started from the pole position. Soon, a battle with Toyota ensued. The Japanese team led the race until stopping for a repair and ultimately retired after a collision. Tom Kristensen/Allan McNish were not spared from minor setbacks either. On lap 25, a defective headlight forced the number “2” Audi to make its first unscheduled stop. In a subsequent duel, the valve of the left rear tire was damaged. This required another unscheduled stop on lap 89. Finally, the recurrence of lighting problems made it necessary to change the hood two more times on laps 115 and 117.

Audi’s hybrid technology on the other hand proved extremely viable in the rough ambient conditions on taking its third victory. For the first time since Le Mans, Audi fielded two R18 e-tron quattro cars in order to afford its two driver squads optimal equality of opportunity in the battle for the title. Whereas the gap between the two teams was only 7.5 points before the race in Bahrain it has now increased to 13.5. However, in the two remaining races in Japan and China, 52 points will still be awarded, so the battle for the title in the drivers’ championship remains open. Only two weeks from now, the WEC will make its Japan debut with the seventh round of the season at Fuji on October 14.

Dieter Gass (Head of Racing Commitments): “Obviously, we’re very pleased with the success in Bahrain. These were extremely hard six hours for us with a lot things happening over the whole race distance. Fortunately, we were able to bring both cars to the finish without any major problems. That way, we managed to score an excellent one-two win.”

Ralf Jüttner (Technical Director Audi Sport Team Joest): “The race didn’t seem to me like a 6-hour race but like 24 hours because there was so much happening. For the drivers, it was extremely rough. We once tried a double stint with André (Lotterer) but realized that that was really pushing the limits. That’s why we opted for shorter stints again, with respect to the drivers as well as the tires. That was exactly the right decision. Positions one and two are sensational. Getting both cars to finish without heat-induced problems is really a solid achievement.”

Marcel Fässler (Audi R18 e-tron quattro #1): “It’s great that we won the race. We made no mistakes. The pit stops were good too. We had to change the car’s nose once because we’d lost an aerodynamic component. Because we had less downforce and more understeer as a result, we changed the front bodywork for safety reasons. The race went a bit in our direction because the Toyota, and unfortunately our team-mates too, had various problems.”

André Lotterer (Audi R18 e-tron quattro #1): “First and second place is a top result for Audi. In the beginning it wasn’t an easy race for me. I drove a double stint and managed to catch up with the Toyota again. I was able to close the gap up to twelve seconds but was very exhausted then. But we exerted pressure. Maybe our rivals took a higher risk as a result and in the end retired due to a mistake. It went superbly. A brilliant performance by the team and by my team-mates.”

Benoît Tréluyer (Audi R18 e-tron quattro #1): “That was a pretty tough race – even a bit tougher than we’d expected. In the first phase, André drove two consecutive stints but that was too difficult and he was hardly able to really concentrate through to the end. That’s why afterwards we only drove single stints. Our pace was good. We lost a small part on the front end which caused the car to understeer. That’s why we changed the front bodywork to be on the safe side. Our car was fantastic and the mechanics did a perfect job.”

Tom Kristensen (Audi R18 e-tron quattro #2): “An outstanding one-two result in the desert in really tough conditions. It was a big challenge for our competitors and for us. Car number 1 delivered a perfect performance – congratulations on that. Unfortunately, we had to change the hood three times and suffered a puncture. Before I got into the car we were already one lap behind. Considering this, second place is a good result. And after all, we’re the best driver squad to finish with only two drivers! The mechanics did a fantastic job of converting the ultra into the e-tron quattro as well during the event.”

Allan McNish (Audi R18 e-tron quattro #2): “Congratulations to Audi on positions one and two in Bahrain. That was a hot race not only with respect to the temperatures. In the beginning, we had a temperature problem on the rear brakes. In addition, we lost a lot of time due to changing the front body parts. But in the end we drove good times again but the gap to the sister car was already too large. Of course that’s a bit disappointing when you start from pole. Now we’re concentrating on Japan.”