Audi one-two victory at WEC round in Brazil 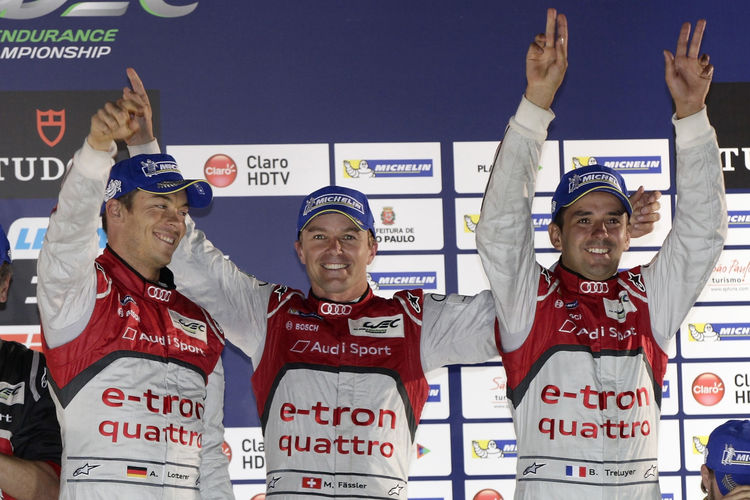 Audi has remained unbeaten in the 2013 sports car season to date. The Audi R18 e-tron quattro hybrid sports car has won the fourth of eight rounds in the FIA World Endurance Championship (WEC). In addition, it claimed victory in the 12-hour classic at Sebring in March. The race weekend in Brazil ended in victory for Marcel Fässler/André Lotterer/Benoît Tréluyer (CH/D/F) ahead of Loïc Duval/Tom Kristensen/Allan McNish (F/DK/GB). On clinching their success in the São Paulo 6 Hours, the winners reduced the gap to their team colleagues in the drivers’ standings by eight to 22 points.

After a flawless race, the current World Champions celebrated their second WEC win of the season following their success at Spa in May. 38,000 spectators watched Fässler/Lotterer/Tréluyer in car number ‘1’ cross the finish line at Interlagos with a three-lap advantage over their sister car. The situation in the standings at the season’s midpoint has thus become more thrilling again after the Le Mans winners Loïc Duval (F), Tom Kristensen (DK) and Allan McNish (GB) had arrived with a 30-point advantage.

The significant gap in the race, though, does not reflect the true performance delivered by car number ‘2.’ In the early phase, Audi factory driver Allan McNish dominated the action. But then the drivers’ trio experienced an unusual streak of misfortune. In a safety car period, Tom Kristensen, after pitting, returned to the track behind a slower GT race car. The nine-time Le Mans winner, who drove the fastest race lap as well, lost around half a minute because the car in front was not keeping the pace of the pack ahead. Loïc Duval subsequently took over the cockpit and was in the process of starting a recovery when, on lap 142 at the exit of the pit lane, he lost the right rear wheel of his car, which had gotten jammed while being mounted. Thus, Duval had to complete one lap on three wheels. The resulting two stop-and-go penalties completed the misfortune of the leaders of the standings who thus lost four laps in total.

In the end though, Head of Audi Motorsport Dr. Wolfgang Ullrich had reason to be pleased with a race weekend that left nothing to be desired. Audi Sport Team Joest, on taking grid positions one and two, setting the fastest race lap and scoring a one-two result, achieved the maximum that was possible and celebrated the first victory in South America. Only the eagerly awaited battle with Toyota did not take place. The challenger’s only race car had become involved in an accident as early as on lap 25 and, as a result, was forced to retire.

In three weeks from now, Audi Sport is aiming to continue its string of success. On September 22, the WEC will be racing on the circuit at Austin in the US state of Texas for the first time. Prior to the event, TV viewers can watch a summary of the São Paulo race on Tuesday, September 3, from 9.15 to 9.45 Uhr on Eurosport.

Dr. Wolfgang Ullrich (Head of Audi Motorsport): “That was a great race for Audi resulting in positions one and two. It’s a shame that our competitor Toyota retired right at the beginning of the race through no fault of their own. Still, it was a tough battle between our two cars for a long time. The guys drove a superb race. Misfortune struck car number 2 with the lost wheel and all the resulting consequences but that, too, is racing. The Championship has become narrower again and it’ll no doubt be a battle all the way up to the end.”

Chris Reinke (Head of LMP): “We’ve seen a commanding and concentrated showing of the entire squad throughout the weekend. We still had something to make up for here because Brazil was the first race last year that we didn’t win. We managed to do that now. Taking the momentum from Le Mans into the second half of the season was an important step. We can build on that. And now we’re going to work on making sure that things will continue as positively at Austin.”

Ralf Jüttner (Technical Director Audi Sport Team Joest): “Much more than this result isn’t possible. But the race was by no means as easy as the one-two victory suggests. Car number 1 was running really well, number 2 had a bad day with a lot of misfortune. It was leading initially but then lost ground through no fault of the driver’s in the safety car period. And then the rear wheel came off. We’ve got a monitoring system that works really well but there’s still a very small and very unlikely possibility – and it occurred today. You can’t blame the mechanics for that either. On a positive note, both cars were running absolutely flawlessly.”

Marcel Fässler (Audi R18 e-tron quattro #1): “It’s good to be back on the top spot of the podium again. It was a race with a large number of incidents. We were fortunate and had no problems whatsoever. That’s why in the final phase we hardly had any more pressure from behind and were able to bring victory home. We all did a good job. I’m sorry for the #2 Audi but that has brought us a bit closer to the Championship.”

André Lotterer (Audi R18 e-tron quattro #1): “It was very important for us to recover as many points as possible. Of course the priority was to have an Audi win. We managed that even though it was a very difficult race for car number 2. It’s a shame that the Toyota retired because it wasn’t quite as thrilling anymore afterward. The whole team did a great job. We can be pleased.”

Benoît Tréluyer (Audi R18 e-tron quattro #1): “We’re very happy after things didn’t go so well anymore for our car number 1 most recently at Le Mans. Obviously, we benefited a bit from the misfortune of the others today as well. That’s why I didn’t have to take as many risks in traffic and was driving with a safety cushion. A big ‘thank you’ goes to my team-mates, the mechanics and the engineers for their first-rate job.”

Loïc Duval (Audi R18 e-tron quattro #2): “I think we weren’t the fastest today. We’ve got to analyze that. It’s a shame that we were unfortunate with the safety car period in the beginning. In addition, I lost the right rear wheel after my first pit stop. When I returned to the pits again afterward the speed sensor wasn’t working and I was a bit too fast in the pit lane. After having to sit two stop-and-go penalties we had no chance of a better place anymore. In the end, we were fortunate to have still finished as the runners-up. If Toyota had fielded a second car today it would have become difficult. In total, it was a good race for Audi.”

Tom Kristensen (Audi R18 e-tron quattro #2): “This race result shows how much detailed work was done in the winter. Last year, we were beaten here by Toyota but this year we showed strong performances. Of course it’s a shame that the Toyota retired so early. Unfortunately, there were several circumstances that prevented number 2 from being able to win today. After unfortunate situations behind the safety car and two time penalties it was almost a small stroke of luck that we still managed to finish in second place. And the Championship remains interesting.”

Allan McNish (Audi R18 e-tron quattro #2): “After a good start for our two Audi cars our competitor Toyota unfortunately retired. I was easily able to control the race and I built a bit of an advantage. But then the tables unfortunately turned. A wheel came off and two penalties followed. Afterward, it was only about safely scoring our points for the Championship. Congratulations to Audi on winning on this track.”