Audi one-two success at the Nürburgring 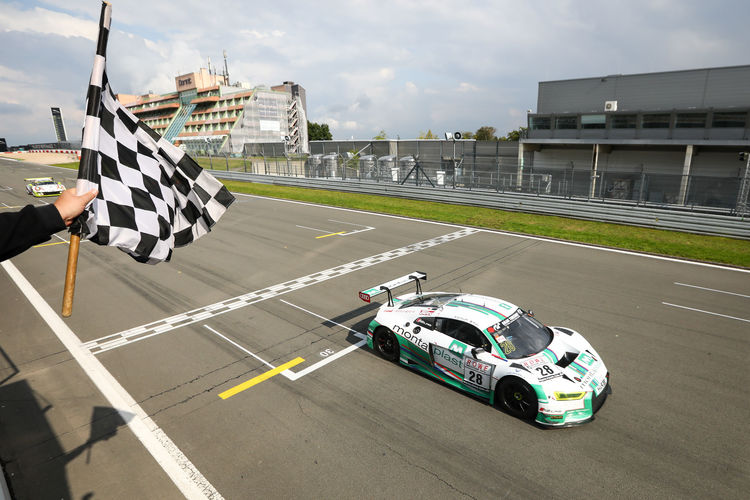 Next round in the title race: For the second time this year, the Juniors are competing in the Audi Sport TT Cup at the Nürburgring. Round six of eight will be marked by a duel at the top of the standings. The Briton Philip Ellis and the Spaniard Mikel Azcona shared the victories most recently at Zandvoort. Ellis has won four times to date and has a 33-point advantage over three-time winner Azcona. Ranked in third place of the table is Dutchman Milan Dontje with another deficit of 19 points. However, with 150 points yet to be awarded in the remaining three events the battle is far from having been decided. The competition in the Rookie classification remains thrilling as well. Tommaso Mosca from Italy has a 24-point advantage over Yannik Brandt from Switzerland, trailed by Keagan Masters with a one-point deficit. Due to a clash of dates with a touring car championship in his native South Africa, though, Masters has to skip the event in the Eifel.

One-two win in the Eifel: Team Montaplast by Land-Motorsport has won round six of the VLN Endurance Championship Nürburgring. The Dutch-American driver duo of Robin Frijns/Connor De Phillippi in the Audi R8 LMS achieved an advantage of 16.415 seconds in four hours of racing. Phoenix Racing completed the one-two success of the Audi customer teams on finishing second. Frank Stippler and the Dane Nicolaj Møller Madsen shared an Audi R8 LMS of Ernst Moser’s squad. For Montaplast by Land-Motorsport this marked the first VLN victory this season and the 23rd VLN win in total. In May, the outfit as a factory-backed team of Audi Sport customer racing had won the 24-hour race at the Nürburgring in the Audi R8 LMS as well.

Positive ending of the season in America: The SprintX racing series of the Pirelli World Challenge ended with a trophy for Magnus Racing. Pierre Kaffer and his American teammate Spencer Pumpelly had started from position seven at the Circuit of the Americas in Austin on Sunday and in the course of 26 laps clinched third place in the Audi R8 LMS.

Another podium place in the Eifel: Two weeks following its first victory in the TCR class, Team Møller Bil Motorsport mounted the podium once again in the VLN Endurance Championship Nürburgring. As the best Audi customer team, the Norwegian outfit with Håkon Schjærin, Atle Gulbrandsen and Kenneth Østvold in the Audi RS 3 LMS claimed second place in the TCR category in round six.

Second place after ten hours of racing: In round five of the Super Taikyu Series, Team BRP Audi Mie achieved second place in the TCR class. In the ten-hour race at Fuji, Kouichi Okumura, Kei Akiyoshi, Daisuke Yamawaki and Kazuo Ueno took turns in the cockpit of the Audi RS 3 LMS. Before the finale, the team is in third place of the standings.

Stefano Comini is third on the table: Last year’s Champion, Stefano Comini, clinched his next podium result in the TCR International Series at the wheel of the Audi RS 3 LMS. The Swiss came third in race two of round eight in Buriram, Thailand. With that, he collected a trophy for Team ComToYou Racing for an amazing seventh time this year. Comini is third on the table with two events to go.

Third place in Portugal: Audi customer racing team Sporting Clube de Braga in round four of the TCR Portugal clinched a podium result. Patrick Cunha in an Audi RS 3 LMS crossed the finish line in position three in race three at Braga. A puncture in race one prevented another podium result.