Audi on second row of the grid in Shanghai 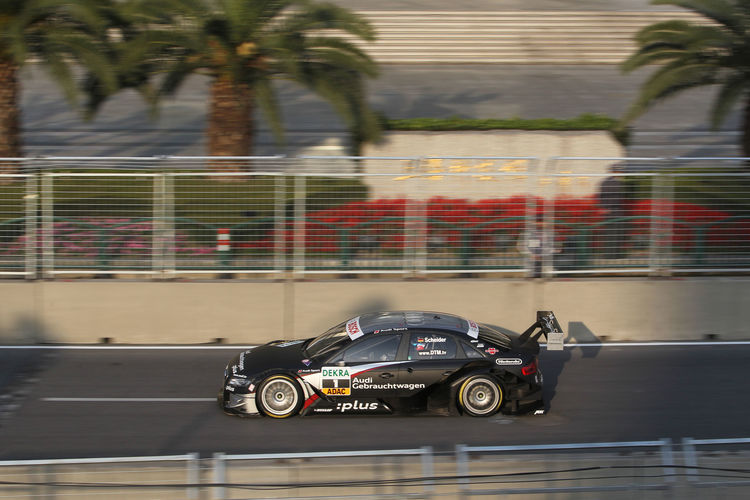 In the qualifying sessions for the DTM’s world finale in Shanghai (China) that was marked by numerous incidents Timo Scheider in fourth place was the quickest Audi driver as well as the victim of a spectacular accident.

Just before the end of the third qualifying section (Q3) the two-time DTM Champion, while running at a speed of about 220 km/h on a lane marking lost control of his Audi A4 DTM, which careered out of control and crashed into the concrete wall backward. Also thanks to the high passive safety of the Audi A4 DTM, Scheider sustained no injuries. The mechanics of Audi Sport Team Abt Sportsline will try and repair the car before the race on Sunday (live broadcast starting at 8:05 a.m., CET, on “Das Erste”).

Scheider was not the only DTM driver to become a victim of the extremely slippery, 2.465-kilometer street circuit’s perils. Not a single one of the total of six practice sessions went without seeing an incident and the red flag. Another driver from the Audi squad to be struck by similar misfortune was the HongKong Chinese Darryl O’Young (Audi Sport Team Phoenix), who after having made an impressive showing on his DTM debut up to that point hit the track barrier in Q2 and then had to settle for the last place on the grid.

“It was obvious that this circuit is totally unforgiving,” said Head of Audi Motorsport Dr. Wolfgang Ullrich. “In summary, both accidents were very unfortunate for us because in both cases some of our drivers were still on a fast lap. But this way we lost the chance of clinching a position on the first row. Now there will be a lot of work to do for the mechanics overnight. Tomorrow we’ll try and make the best of the situation. Anything’s still possible – particularly on this track.”

With six Audi A4 DTM cars on the top ten positions, Audi will start into the last and perhaps most difficult DTM race of the year covering 60 laps on the tricky circuit in the district of Pudong with a solid team line-up. The second-best Audi driver on the grid is Markus Winkelhock (Audi Sport Team Rosberg) on position five. The Swabian had previously shone by posting the fastest time of all Audi drivers in the morning’s free practice session.

Miguel Molina, Martin Tomczyk, Mattias Ekström and Oliver Jarvis (alle Audi Sport Team Abt Sportsline) are forming an Audi block on rows four and five. Mattias Ekström, who was the best Audi driver at the DTM’s first race in Shanghai in 2004, played it safe in Q3 and immediately started on a time chase for fear of another red flag being waved. “Basically, that had been the right thing to do because the track became faster and faster with every lap. Thus the best times were being set at the end of the session,” said Ekström.

Le Mans winner Mike Rockenfeller was held up twice in Q3 by rivals and as a result was unable to do better than 13th place. By clinching grid position 14 despite an accident at the beginning of the free practice session in the morning, Katherine Legge achieved her best qualifying result of the season.

The DTM race in Shanghai will start on Sunday at 3:15 p.m., local time (8:15 a.m. Central European Time). Audi China uses the event to launch the Audi TT on the Chinese market and is expecting about 1,400 guests who can look forward to an exciting race.