Audi on second row at Zandvoort 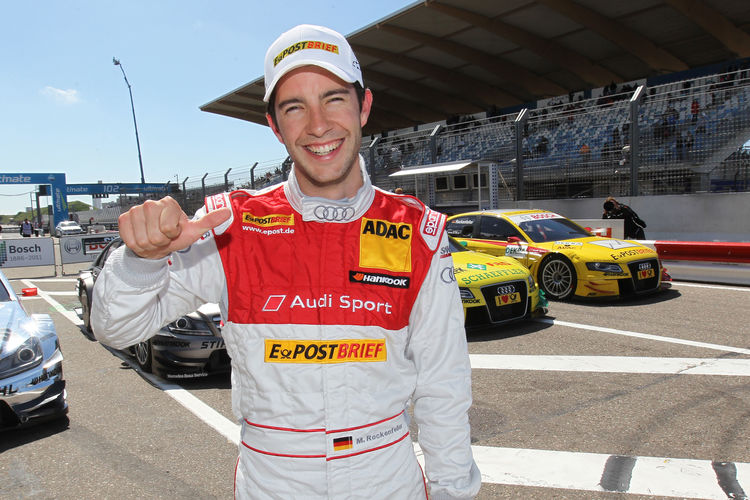 By merely 77 thousandths of a second Mike Rockenfeller missed the front row in qualifying for the DTM race at Zandvoort (the Netherlands). The Le Mans winner will start into the race on Sunday (from 1:55 p.m. – local time – live on “Das Erste”) as the best Audi driver.

Starting right in front of the 27-year-old German from Audi Sport Team Abt Sportsline will be the quickest in qualifying, Bruno Spengler, who sent the Audi driver into a spin last year at Zandvoort, thus depriving him of scoring points. Therefore, Rockenfeller will give everything to overtake Spengler on Sunday.

This is by no means the only reason why fans can look forward to a thrilling race. As at the Hockenheim season opener, the field at Zandvoort is again extremely compact. Although the 4.307-kilometer circuit in the dunes along the Dutch North Sea Coast is considered the most demanding track on the DTM calendar, the fastest 16 drivers in the first qualifying session (Q1) came within just seven tenths of a second. And the balance between Audi and Mercedes-Benz is remarkable as well. Seven vehicles, respectively, of both brands managed the leap into Q2, four each into Q3 and two each into Q4. In Q4, though, the competition was running in front.

The second Audi driver in Q4 besides Mike Rockenfeller was Martin Tomczyk, who in the A4 DTM from Audi Sport Team Phoenix confirmed his strong performance at Hockenheim and was again the quickest driver of a 2008-specification car. With a gap of just 46 thousandths of a second to Rockenfeller, Tomczyk secured position four on the grid.

“I’m happy for Mike (Rockenfeller) and Martin (Tomczyk), both of whom have shown very strong performances throughout the weekend,” said Head of Audi Motorsport Dr. Wolfgang Ullrich. “That we don’t have a car on the front row of the grid is certainly a bit disappointing. But last year we had a car on row one and didn’t win the race nonetheless – we want to turn this situation around this year.”

“A much better result wasn’t possible today,” commented Mike Rockenfeller after qualifying. “As at Hockenheim, my guys again gave me a great car. Thank you very much for that! Now we’ve got to do everything within our means to keep this pace in the race as well.”

Timo Scheider will tackle the race from the third row. On position seven, Edoardo Mortara (Audi Sport Team Rosberg) was the best DTM rookie in qualifying. With Miguel Molina and Filipe Albuquerque on positions nine and ten, a total of six Audi drivers managed the leap into the top ten.

For Oliver Jarvis (grid position twelve) and Mattias Ekström (grid position 16) qualifying turned out to be a disappointment. For the first time in his DTM career the Swede was eliminated in Q1 – and without having made a discernible mistake, which gives further proof of how brutally close the battle is in the DTM this year. In this light, Rahel Frey’s position 18 with an eight-point gap to position 17 is not a result to be ashamed of.