Audi on front row at Shanghai 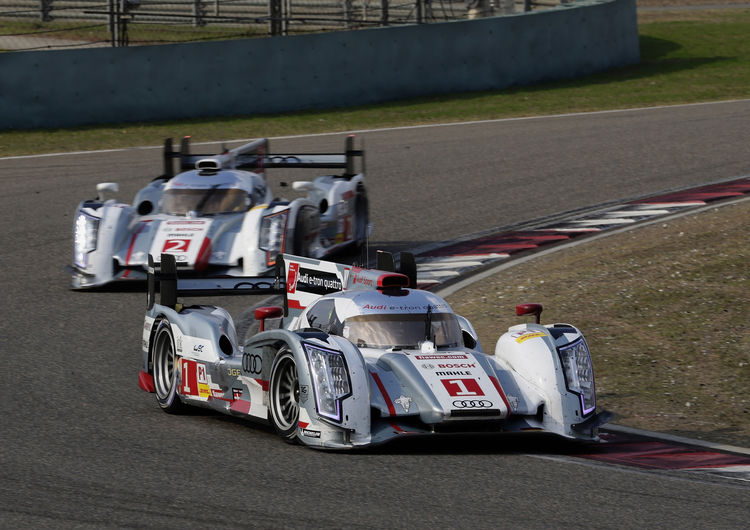 In a qualifying session that was thrilling up to the last seconds, a ‘string’ broke for Audi at the seventh round of the FIA World Endurance Championship (WEC) in China. The Audi R18 e-tron quattro had been unbeaten in qualifying since May. Now the score in the battle with challenger Toyota is 5-2 for Audi.

Car number ‘1’ was clearly the faster one of the two Audi hybrid sports cars in qualifying at Shanghai. Marcel Fässler was the first driver to go out. On the average of his two fastest laps, he achieved the second-best time, trailing Toyota driver Alexander Wurz by a gap of 0.432 seconds. On his fastest lap, he even beat last year’s qualifying lap record by 261 thousandths. When Benoît Tréluyer followed Fässler, the Frenchman reduced the gap to the front runner on the average of his first two laps to 0.217 seconds. As Tréluyer was forced to run behind in traffic on his first outing, he pitted to refuel and to start another trial on the used tires, subsequently managing to set his personal best lap time of 1m 48.091s. Last year’s World Champion thereby reduced his gap to the number ‘7’ Toyota to 0.089 seconds and just barely missed grid position one together with his team-mates. With that, a string of five consecutive best times in WEC qualifying sessions came to an end for Audi.

In the number ‘2’ Audi R18 e-tron quattro, Allan McNish and Tom Kristensen on the average of the four fastest times achieved 1m 49.173s. Therefore, the leaders of the standings will be starting from the second row alongside the number ‘8’ Toyota. The grid positions, though, tend to be of secondary importance in the 6-hour race in the Chinese metropolis. The crucial aspects on the rough tarmac and in the tight combinations of turns are to tactically manage the race well and to treat the tires gently, as temperatures of clearly above 20 degrees centigrade are expected on Saturday.

The beginning of the seventh race of eight World Championship rounds is scheduled for 11:00 local time (4:00 CET). The race can be watched on the internet by live streaming on www.audi-motorsport.com and www.fiawec.com. Additionally, a 100-minute TV broadcast on Eurosport starts in Germany on Saturday at 8:35.

Dr. Wolfgang Ullrich (Head of Audi Motorsport): “We knew that qualifying would be very hard for us here because this track doesn’t suit us particularly well. But we showed that we’re really battling all the way to the end. Ben (Tréluyer) ultimately showed a fantastic lap. The prerequisites for the race are difficult. We’ve got no advantage in terms of lap times and, on top of that, a disadvantage due to the smaller tank capacity. But six hours is a long time and the whole squad will give everything in order to clinch a good result.”

Chris Reinke (Head of LMP): “We saw a thrilling qualifying session in which we tried everything all the way up until the end. The characteristics of the track here at Shanghai are some of the most difficult ones of the whole season for us and despite this we’re on an equal footing with our competitors. This confirms our solid preparation. For the race, we’re expecting a fierce battle for victory.”

Ralf Jüttner (Technical Director Audi Sport Team Joest): “That was an interesting qualifying session. The Toyota initially set a strong time. Ben (Tréluyer) was very strong but was a bit unfortunate in traffic and had to pit again in order to get some fuel. Congratulations to Toyota, who are in front for the time being. But we’re going to give them a good battle tomorrow. In the case of our number ‘2’ car, things didn’t go so well. We’ve got to take a closer look at that. Now we’re going to perfectly prepare the two cars for the race.”

Marcel Fässler (Audi R18 e-tron quattro #1): “We almost took the pole position, there was really just a tiny bit lacking. Ben (Tréluyer) drove brilliantly, the whole team did a superb job of preparing the car. I may have been a bit too ambitious on my fast laps but, still, we’ve got a good starting base for the race.”

André Lotterer (Audi R18 e-tron quattro #1): “That was a nice qualifying session in which we battled all the way to the end. Ben (Tréluyer) did a great job even though it wasn’t quite enough in the end. On his second fast lap, he hit a bit of traffic. It was close but we’re looking to the race with optimism.”

Benoît Tréluyer (Audi R18 e-tron quattro #1): “It was a close qualifying session and a nice battle with Toyota. We worked out a good set-up today, which helped us a lot. I hit traffic twice on my fast laps but that’s part of the game. We’ve got a good car for the race tomorrow.”

Loïc Duval (Audi R18 e-tron quattro #2): “I was struggling a bit this afternoon but, still, it was fun watching the guys battle for the pole position. Our fourth place on the grid is perfectly okay for such a long race. Naturally, we’d prefer being further in front but things like dense traffic are part and parcel of a WEC qualifying session. Congratulations to Toyota, but also to our sister car.”

Tom Kristensen (Audi R18 e-tron quattro #2): “I’m not happy with qualifying. I always had a lot of traffic on my three laps. But now we’re looking to tomorrow. In the practice sessions we worked out a few things that should be helping us in the race. That’s what we mainly concentrated on.”

Allan McNish (Audi R18 e-tron quattro #2): “That was a pretty difficult qualifying session. Our second free practice wasn’t optimal, so we weren’t perfectly prepared for qualifying. In terms of lap times, the car is very fast. But our biggest issue is treating the tires well across the distance.”