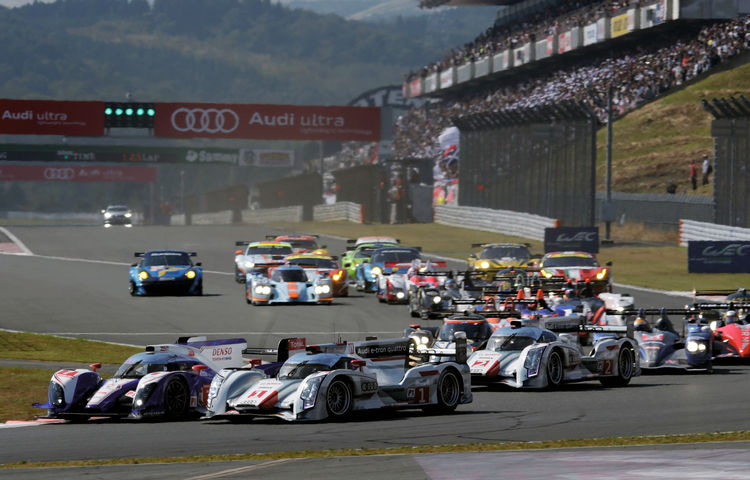 Audi had to settle for positions two and three at the seventh round of the FIA World Championship (WEC). A sporting penalty deprived the number “1” Audi R18 e-tron quattro of all chances for victory at Fuji.
Download PDF (171 KB)
Facebook
Twitter
LinkedIn
WhatsApp

Two podium places in the Far East: Audi had to settle for positions two and three at the seventh round of the FIA World Championship (WEC). A sporting penalty deprived the number “1” Audi R18 e-tron quattro of all chances for victory at Fuji.

Up to the six-hour race’s mid-point, Audi was fighting a thrilling battle for victory with Toyota. At the beginning of the race, André Lotterer in the number “1” R18 e-tron quattro constantly remained within striking distance of Toyota driver Alexander Wurz. Benoît Tréluyer, who took over driving duties of the hybrid prototype from Lotterer, continued the chase and took the lead after a thrilling duel. However, shortly after the race’s mid-point, a GT vehicle collided with the Audi in a lapping maneuver. Due to the resulting damage, a pit stop was made to change the front hood. This cost a further 24 seconds in addition to the regular duration of the pit stop. When the race directors decided that the Audi was to blame for the accident and issued a stop-and-go penalty, car number “1” dropped to third place. André Lotterer drove good lap times and recovered to second place in the penultimate hour of the race. Only 11.2 seconds separated him from the winning Toyota in the end. With this result, the three Le Mans winners Marcel Fässler/André Lotterer/Benoît Tréluyer extended their lead of the standings by three to 16.5 points.

At this point in time, Allan McNish and Tom Kristensen were struggling with the handling of their number “2” Audi R18 e-tron quattro. The reason was that in the fourth hour of the race, a LMP2 prototype had hit Audi’s prototype, damaging various small aerodynamic components at the front of the R18 in the incident. The team, however, decided not to change the hood, as this would have cost more valuable time. Consequently, the Anglo-Danish duo ultimately took third place.

Although Audi, despite a good race performance, was deprived by the sporting penalty of any chance of taking its sixth victory of the season, the entire squad can look forward to the finale at Shanghai two weeks from now. After the early win of the manufacturers’ world championship* by Audi in August, the title in the drivers’ championship will be awarded at the finale. Irrespective of whether the decision will be in favor of Fässler/Lotterer/Tréluyer or Kristensen/McNish – Audi will win this classification in the inaugural season of the FIA World Endurance Championship (WEC) as well.

Dr. Wolfgang Ullrich (Head of Audi Motorsport): “We delivered a very good race today. If you’re just eleven seconds behind, although a repair and a stop-and-go-penalty made car number ‘1’ lose ground, this shows how good the performance basically was. We battled for victory and it would have been possible to achieve it, but unfortunately not everything came together today. Toyota was very strong here and won the home race. Congratulations on that!”

Ralf Jüttner (Technical Director Audi Sport Team Joest): “The large number of spectators in Japan experienced a nice six-hour race with a really close outcome. Congratulations to Toyota on winning their home race. We were exactly on course with our strategy and the fuel consumption of our car is known to be very favorable. Unfortunately, Benoît Tréluyer on lapping a GT vehicle became entangled in an accident. The repair of the front hood and the harsh drive-through-penalty cost us time. In all fairness, we’ve got to admit that the subsequent yellow period was advantageous for us on the other hand. A big compliment goes to our squad. Part of the team spent the night at the track due to a repair and still showed a top performance on race day.”

Marcel Fässler (Audi R18 e-tron quattro #1): “We could have achieved victory today. But it’s always possible for incidents to happen in the race. I think the drive-through-penalty was a bit harsh. The race was very thrilling. I only drove once because we changed our strategy toward the end. That way, André was able to drive a double stint on one set of tires and we didn’t have to change tires again.”

André Lotterer (Audi R18 e-tron quattro #1): “We drove a great race and no doubt had the potential to win. The team and all the mechanics did a top-notch job. Unfortunately, we lost ground due to the penalty – that was bitter. But you can’t always win in motorsport, even though I’d have been particularly happy to have done so in Japan, my second home. Now we’ve got to settle for second place. Two weeks from now, in China, we want to win the title.”

Benoît Tréluyer (Audi R18 e-tron quattro #1): “In the end, our day wasn’t so bad, even though our aim had been to win the race in front of Toyota. We had to attack straight from the start and take certain risks. Unfortunately, I had a collision with an opponent in traffic. It’s disappointing to lose by just a narrow margin of eleven seconds. But in the World Championship we’re running in front and have extended our lead.”

Tom Kristensen (Audi R18 e-tron quattro #2): “This was a disappointing day for number ‘2’ because our car felt really good in longer distances before the race. We’d have liked to be in contention for victory but the rubber on our tires that we picked up from the track cost us a lot of time. Unfortunately, Allan was involved in an accident – in which the front hood of our car was damaged. Towards the end, I was struggling with a lot of oversteer. It’s been a difficult day. We’re hoping for a nice finale in China.”

Allan McNish (Audi R18 e-tron quattro #2): “It was a very difficult race. I had a good start and a good initial phase. After André Lotterer overtook me, my car started picking up rubber from the track. This caused heavy vibrations. Tom had the same problem. We continued to battle but were not consistently quick enough. In the end, third place was the maximum. With a view towards the championship, the result is disappointing. We’re now facing a very difficult challenge at Shanghai. The aim can only be to win the race.”