Audi Nines MTB 2019: The second edition of the Audi Nines mountain biking event is just around the corner!

{{ activeItem() }}
Twitter
12/03/21
At #KlimaKon21 hosted by @derspiegel and @BCG #Audi CEO Markus Duesmann discussed how the automotive industry can b… https://t.co/Li2pGN91i0
12/02/21
RT @LMU_Muenchen: Die LMU distanziert sich von dem Inhalt des Videos einer Pathologie-Mitarbeiterin. Sie wurde mit sofortiger Wirkung von i…
11/30/21
Sharing a passion for progress. Andy Proudman and Piers Ward from @Meandmygolf are on a mission to help as many peo… https://t.co/Neb2nbylfy
11/29/21
Breaking through barriers. Andy Proudman and Piers Ward from @Meandmygolf have a vision of the future, inspiring pe… https://t.co/3g7SXXGVLG
Audi on Twitter
YouTube
11/29/21 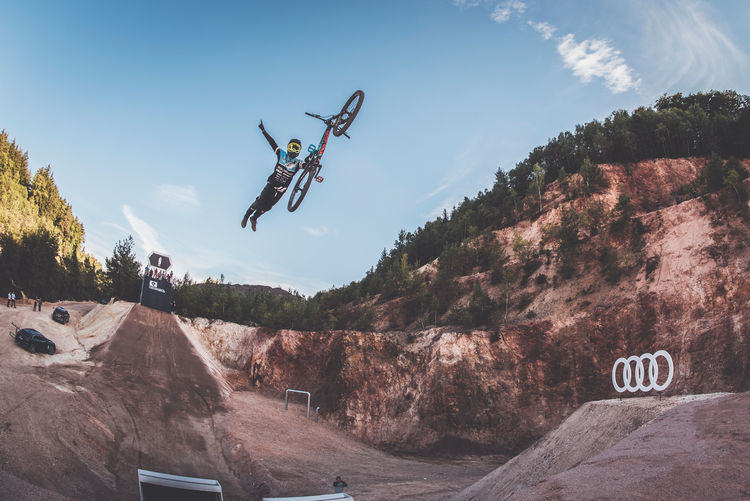 Ingolstadt, 9 September 2019 – The top 20 mountain bikers in the world will be showing off their full repertoire of skills at the annual Audi Nines MTB event, which is taking place this year from 9 to 14 September. The venue is the impressive stone quarry near Birkenfeld, hence the tagline of “send it to the (moon) quarry”. For the first time this year, a Public Contest Day on 14 September 2019 will give the fans a unique opportunity to see their mountain biking heroes up close. Audi is supporting this event as title sponsor for the second year, mirroring its involvement in the winter version of the Audi Nines.

It’s just around the corner! The second edition of the Audi Nines mountain biking event is starting on 9 September 2019. In cooperation with Bikepark Idarkopf, Audi Nines MTB is transforming Ellweiler quarry near Birkenfeld into a unique mountain biking terrain. The massive jumps will give the best mountain bikers in the world ample opportunity to show off their most impressive tricks to spectators. After a packed week of video and photo shoots, the highlight of the event will take place on 14 September 2019 with the free-admission Public Contest Day. The gates will be open to spectators from 10 a.m.

So far, 20 invitees have confirmed their participation. Many of the biggest stars of the scene will be there, including the first mountain biker to complete a double back flip, Sam Reynolds (GBR), and the overall winner of the FMB Diamond Series 2016, Nicholi Rogatkin (USA). Other big names at the event will be the winner of the FMB World Tour 2013, Sam Pilgrim (GBR), along with the champion of the FMB Diamond Series 2017, Emil Johansson (SWE). The line-up will be completed by up-and-coming talents like Jackson Goldstone (CAN) as well as leading German riders in the form of Erik Fedko from Fröndenberg, Patrick Schweika from Koblenz, Lukas Knopf from Jahnsdorf, Nico Scholze from Filderstadt, Tobi Wrobel from Nuremberg and Lukas Schäfer from Diez.

Every aspect of the spectacular course for the Audi Nines MTB 2019 event was designed by mountain biking professionals. A course-building team that included the mountain bike riders Patrick Schweika (GER) and Sam Reynolds (GBR) took charge of the development of the course, which is perfectly tailored to the demands of the pros. The two lines for slopestyle and freeride bikes were inspired by the innovative design of the previous year, but with some improvements and additions. Alongside the “Perfect Hip”, a jump with a steep take-off and a landing that is offset at a 90 degree angle, and which is located right in front of the spectators’ viewing zone, the slopestyle course will also feature the new “Space Station” – a solar panel pavilion that is ideal for street-style tricks.

The Audi Nines MTB 2019 event unites sport and art, people and heroes, architecture and progress, community, camaraderie and sustainability. From 9 to 14 September, Birkenfeld will become the centre of the mountain biking universe. By following up and improving on the previous edition of the Audi Nines mountain biking event, the brand is underlining another year of continuous development.

The Audi Group, with its brands Audi, Ducati and Lamborghini, is one of the most successful manufacturers of automobiles and motorcycles in the premium segment. It is present in more than 100 markets worldwide and produces at 16 locations in twelve countries. 100 percent subsidiaries of AUDI AG include Audi Sport GmbH (Neckarsulm), Automobili Lamborghini S.p.A. (Sant’Agata Bolognese, Italy) and Ducati Motor Holding S.p.A. (Bologna, Italy).

In 2017, the Audi Group delivered to customers about 1.878 million automobiles of the Audi brand, 3,815 sports cars of the Lamborghini brand and 55,900 motorcycles of the Ducati brand. In the 2017 fiscal year, AUDI AG achieved total revenue of €60.1 billion and an operating profit of €5.1 billion. At present, approximately 90,000 people work for the company all over the world, more than 60,000 of them in Germany. Audi focuses on sustainable products and technologies for the future of mobility.