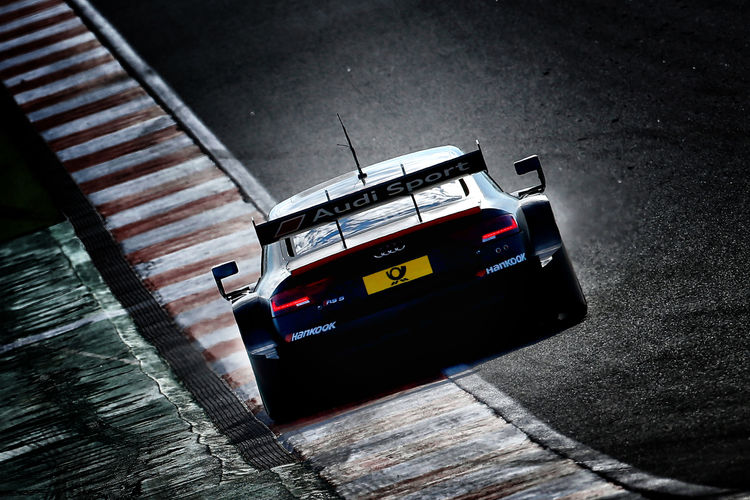 After the New Zealander Richie Stanaway had the opportunity to drive the Audi R18 e-tron quattro following the WEC finale in Bahrain, Audi Sport is now giving six young drivers the chance to test the Audi RS 5 DTM. From Tuesday to Thursday, at Jerez, Spain, Matthew Brabham (21/USA), Mitch Evans (21/New Zealand), Antonio Giovinazzi (21/Italy), Ben Hanley (30/Great Britain), Alex Palou (18/Spain) and Arthur Pic (24/France) are taking turns at the wheel of the DTM car that with ten victories scored was the most successful DTM car this year. During the ‘Young Driver Test,’ the junior talents are receiving valuable tips from the two DTM drivers Mattias Ekström and Miguel Molina.

Special accolade for Tom Kristensen: the Le Mans record winner’s unique career has been honored at the Essen Motor Show in Germany. The editorial board of the special interest magazine “AutoBild motorsport” awarded the “Goldener Rennfahrerschuh” (Golden racing driver boot) to the overwhelmed Dane on Friday evening at the traditional “Race night”. The new endurance world champion Timo Bernhard, who won the 2010 Le Mans 24 Hours in an Audi R15 TDI, MADE the congratulatory speech. Some 600 guests gave Kristensen a standing ovation.

Although the DTM season is over, the race against time continues for Adrien Tambay. The Audi driver contests the French ice racing series Trophée Andros again this winter. After competing in the past with an electric racecar, the Frenchman starts for the first time for the Belgian Audi Club Team WRT. “The series is a lot of fun and I’m happy to compete with this team,” says the 24-year-old professional. He shares the Audi A1 quattro start number ‘11’ with his compatriot Lionel Daziano, who won the ‘Elite 2’ class last season. The sister car with number ‘2’ is driven by ex-Formula 1 driver Olivier Panis and French lady Bérénice Demoustier. The season opens in December in the French winter sport resort Val Thorens and includes seven events up to February 2016.

Six events featuring twelve races in five Asian countries – the Audi R8 LMS Cup has announced its calendar for the 2016 season. In addition to rounds in China, Malaysia, Korea and Taiwan, the fifth season of the one-make cup will include a race in Thailand for the first time. Next year will be seeing the first season in which the Cup participants are relying on the new Audi R8 LMS, while an additional classification will be held for the existing models.

Mattias Ekström clinched second place in the final round of the 2015 FIA Rallycross World Championship. At Rosario, Argentina, the Swede in the Audi S1 EKS RX quattro of his privateer Teams EKS only had to admit defeat to his compatriot Robin Larsson in the finale of the top six drivers. For Ekström, following his victory in his home round at Höljes and second place at Lydden Hill, UK, this marked the third podium finish this season. In the drivers’ classification, the 37-year-old ranks in sixth place overall. Together with EKS, the team boss and driver is now feverishly working on plans for the next season that will start in Portugal in April 2016.

A word from ... Head of Audi Motorsport Dr. Wolfgang Ullrich

“It was not an easy year for Audi Sport. We made a great start to the season and won a number of important races but unfortunately clinched no title in either WEC or DTM, which are our two most important programs. But 2015 has not been a season we need to feel bad about. Quite the contrary is true. Our target is always to be able to win. And that was the case in 2015 in WEC as it was in DTM. The Audi R18 e-tron quattro won the first two WEC rounds at Silverstone and Spa and we only just missed out on victory at Le Mans. The RS 5 DTM scored four consecutive victories at the beginning. This is something special as Audi Sport has moved from Ingolstadt to Neuburg at the end of last season. The logistical efforts were not easy at all and put an additional workload on the entire team. It speaks for Audi Sport that we succeeded in doing all that and in heading well-prepared into the new season.”

“Audi Sport customer racing is now based at Neuburg as well. They even moved premises in the course of the season. In this phase, the customer racing colleagues made the new Audi R8 LMS ready for production. And they worked so hard that they clinched the outright win in the fiercely contested Nürburgring 24 Hours first time out. Last but not least, quattro GmbH has also launched the new Audi Sport TT Cup. The new one-make cup was a hit out of the box and I regard it as an asset for the DTM weekends. All people involved can be proud of the result.”

Audi Sport has been an own brand since this year and markets the R and RS models. Are you proud of this?

“For us in the motorsport department, this is a strong signal: motorsport is part of Audi’s DNA and is firmly established in the Group. At Audi, the technology transfer between motorsport and road car production has materialized. Audi Sport has been synonymous for Audi’s success in motorsport for more than 35 years. The joint trademark for motorsport and the sportiest range of road cars underlines this again.”

Is that the reason why Audi stays fully committed to motorsport in 2016 as well?

“Our board knows how important motor racing is for the brand. That’s why we succeeded in extending the basic program of the past year into 2016 – we now aim at achieving success in an even more efficient way. WEC, DTM, GT sport and the Audi Sport TT Cup: that will all be part of the package of the Four Rings next year again. Of course we are asked to look after the costs and to use our budgets as efficiently as possible. That requires a lot of effort. But if we stand together as we always do at Audi Sport when times are getting a bit more difficult, we will master this challenge as well.”