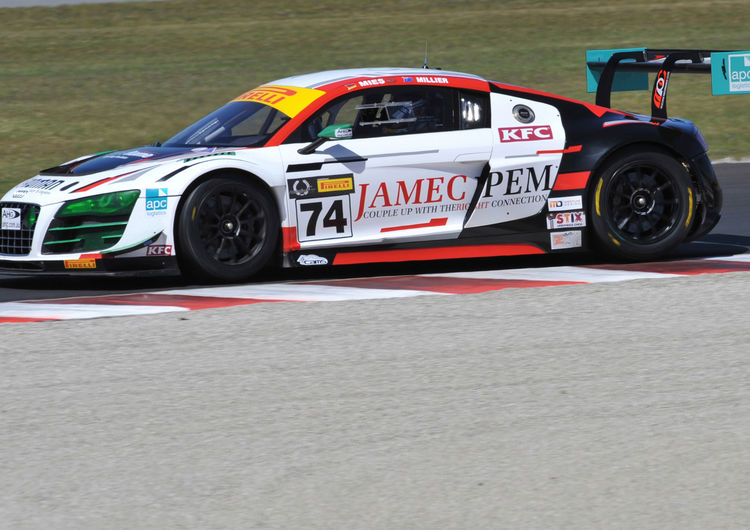 Two title victories and a podium finish – the Audi customer teams make their way home from the ‘Highland 101’ event in New Zealand after a strong result. In the Australian GT Championship, which staged its season finale at the Highlands Motorsport Park in Cromwell, a fourth place in the first of two races was enough for Christopher Mies to clinch the title in the overall classification. Mies shared the Jamec PEM Racing Audi R8 LMS ultra with Ryan Millier. Greg Taylor and Barton Mawer from Audi customer team Wall Racing were Champions in the Trophy class for non-current cars. In the ‘Highlands 101’ invitation race, Mies/Millier were the best Audi duo in second place.

The Golden Lenkrad presented by the Axel Springer Verlag is one of the most coveted awards in the automobile industry. DTM driver Mattias Ekström attended the awards ceremony on Tuesday evening in Berlin. The Audi factory driver was again this year a member of the expert jury comprised of chief editors, designers, celebrities, technicians and digital experts.

An expert jury recognized the Competence Center Motorsport as part of the Audi Neuburg facility that was opened in 2014. Christian Weck accepted the ‘Motorsport Facility of the Year’ award presented by the Professional Motorsport World Expo trade fair in Cologne on Wednesday on behalf of Audi Sport. In addition to Audi Sport and Audi Sport customer racing, Audi’s premises in Neuburg are home to the Audi driving experience. Technical Development (TE) of AUDI AG uses the facility as well.

The first two North American teams have opted for the new Audi R8 LMS. Magnus Racing and Stevenson Motorsports are going to field the new GT3 sports car in the GTD category of the IMSA WeatherTech SportsCar Championship. At Magnus Racing, two drivers of the Audi R8 LMS – team owner John Potter and Andy Lally – have already been determined. Stevenson Motorsports is planning to field two vehicles. The season of North America’s most important sports car championship will be opened by the 24-hour race at Daytona on January 30–31.

Richie Stanaway can hardly wait: Twelve days before his rookie test on the WEC weekend in Bahrain, the race driver from New Zealand visited Audi Sport in Neuburg. Among other things, his thorough preparations included an individual seat fitting and orientation on how to operate the car. An FIA World Endurance Championship (WEC) promotion program is making the test with Audi a day after the WEC season finale in Bahrain possible for the 23-year-old up-and-coming driver. “Now I’ve gotten to know the Audi R18 e-tron quattro for the first time in Neuburg, plus I’ve developed a feel for what to expect and how to prepare,” said Stanaway. Audi driver Benoît Tréluyer accompanied the New Zealander and assisted him with advice.

Leena Gade for FIA Women in Motorsport Commission in Wales

Leena Gade entered unusual territory in Wales. The Audi Sport race engineer for the number ‘7’ Audi R18 e-tron quattro in the FIA World Endurance Championship (WEC) visited the finale of the World Rally Championship in Great Britain. As a commission member, Gade, alongside Michèle Mouton, the president of the FIA Women in Motorsport Commission, is active in promoting women in motorsport. At the WRC finale, she familiarized herself with the activities of women in rallying. Prior to the start of the rally, the Briton climbed into the Volkswagen Polo R WRC alongside World Rally Champion Sébastien Ogier. “It’s absolutely impressive to see what’s possible with these cars,” Leena Gade said after a short ride on a blocked off gravel track. Gade, as an engineer for Audi, won the Le Mans 24 Hours three times and the FIA World Endurance Championship (WEC) once between 2011 and 2014. Michèle Mouton was the 1982 World Rally Championship runner-up in the Audi quattro.

During the traditional golf tournament hosted by Audi’s partner ABT Sportsline at the ‘Sonnenalp’ in the Allgäu region, DTM star Mattias Ekström caused a surprise on Monday on achieving the longest drive of all the participants. Although, by his own account, he grips a golf club only once a year, the Swede managed a remarkable 227 meters.

DTM driver Mike Rockenfeller visited the Schaeffler site in Bühl. The Audi factory driver, who was competed in the race series in the company’s colors since 2012, signed posters and hats for a good 200 employees and looked backed over the season passed in an interview. Also in attendance was Daniel Abt, who contests the Formula E electric racing series for Team ABT Schaeffler Audi Sport. Both racing drivers used the trip for a round of questions and answers on the Schaeffler Twitter account.

Biela/Molina on the podium again

For the second time in succession, Frank Biela and Miguel Molina took second place with a 1:24 scale Audi R8 LMS in the 24 Hours of Hamburg for slotcars. It was the seventh consecutive podium finish for Biela in the traditional season highlight of the RCCO race series. After 5,248 laps, the two Audi drivers were only five laps behind the victorious McLaren-team mag channel racers. The Audi team took the lead during the night and held first place for a long time. Ralf Jüttner, Team Boss for Audi Sport Team Joest in the WEC, finished on podium in third place.

The DTM season is over, but a special highlight is still on the agenda from November 19-22 for Audi factory driver Edoardo Mortara: the Macau Grand Prix.

You completed your best season to date in the DTM with fourth place overall. What’s your verdict?

“It was certainly a good season. My fondest memory is of course my victory in the first race at Spielberg. The only thing I was disappointed by was the outcome of the season finale at Hockenheim. I arrived at the track in second place overall with a chance of winning the title, and in the end I lost two places.”

“Yes, as always a highlight. Obviously, I’d dearly love to add another win to my collection. Especially as the 2015 Grand Prix has the status of FIA GT World Cup for the first time. Consequently, the incentive to win is even greater than before. But it won’t be easy, because we have a qualification race before the main race. Anything can go wrong on this tight and twisty street circuit. The grid is also packed with drivers capable of winning.”

You compete for Audi Sport Team Phoenix and will race the new Audi R8 LMS for the first time. Did you have the opportunity to test it beforehand?

“I tested the car extensively at Le Castellet in the middle of last week. It fells very good. The Audi Sport customer racing engineers have done a great job, because the differences are really big to its predecessor the Audi R8 LMS ultra. I’m already looking forward to drive the new R8 LMS against certain tough competitors.”