{{ activeItem() }}
Twitter
06/12/21
Mission:Zero. With Audi production sites in Brussels, Györ and Böllinger Höfe already carbon-neutral on balance, we… https://t.co/Nf5Oolocro
06/11/21
A statement of progress. We contribute to bridging the gap between sustainability and luxury. By doing this, we cre… https://t.co/tzs4YpnxQz
06/11/21
Audi charging hub: The future concept for quick charging addresses peak demands with high-power charging stations.… https://t.co/jo7VU3o6vQ
06/10/21
Steering in the right direction: In 1980, the Audi steering wheel was characterized by a puristic look. Now the ste… https://t.co/65MFlDDYij
Audi on Twitter
YouTube
06/07/21 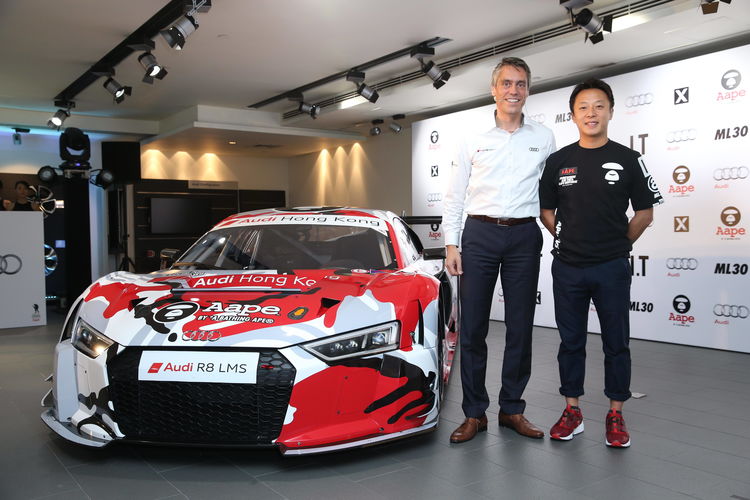 Audi Hong Kong has presented the first new Audi R8 LMS for Asian customer teams. In Hong Kong, the Phoenix Racing GT3 race car debuted in the colors of Aape by a bathing ape. Marchy Lee, the third-place finisher in the 2015 Audi R8 LMS Cup, will compete in it in the city street race in Macau from November 19 to 22. The new race car generation of the R8 is planned to be fielded in the Audi R8 LMS Cup starting in 2016 but may be ordered by customers for other competitions as well.

Audi Sport Team Rosberg went on a special excursion: The DTM team visited the Orange House in Peißenberg, Upper Bavaria – a therapy and creative center that has been developing and implementing programs for children and teenagers from difficult family backgrounds. “This was really a nice event,” said Arno Zensen, the Team Director of Audi Sport Team Rosberg. “We showed the children our race truck and they had the opportunity to paint one of our Volkswagen vans. It was great to see how they became less and less reserved in the process and how much fun they had. From now on, we’re going to regularly visit the Orange House.” The Orange House was established as a result of a commitment by the Hoffmann Group Foundation in collaboration with the Tabaluga Children’s Foundation.

British duo Oliver Jarvis and Allan McNish attended the UK media launch of the latest Audi R8 at Le Castellet in Southern France this week. Over 80 media from England, Scotland, Wales and Northern Ireland were present to test drive the 16 R8 V10 plus models on roads around the Paul Ricard track. Audi Sport's FIA World Endurance Championship driver Jarvis and 2013 WEC champion McNish were on hand to demonstrate the R8 and also discuss this year's racing activities.

A side trip to the Rally Spain, triathlon participation, Halloween party, attendance of the Audi Awards in Barcelona: there’s been no chance of boredom for Miguel Molina since the DTM finale at Hockenheim. And on the weekend of November 14/15, another special mission will be on the agenda of the Spanish Audi factory driver. With a 1-24-scale Audi R8 LMS, he’ll be contesting the Hamburg 24 Hours for slot cars for the second time. One of his teammates will be the five-time Le Mans winner Frank Biela. “After second place last year, our aim this year can only be victory,” says Molina. “But there’s fierce competition.”

At the final round of the British Endurance Championship season at Donington, the Audi customer team Tockwith Motorsports finished the season in top form. Drivers Phil Hanson and Nigel Moore, who took pole position for the first race in qualifying at the wheel of an Audi R8 LMS ultra, finished third in both races.

Lucas di Grassi won the second race of the Formula E season in Putrajaya (Malaysia). The Audi factory driver kept a cool head in temperatures around 35 degrees Celsius before being presented with the trophy after 33 laps from the country’s Prime Minister. The 31-year old Brazilian, who drives for Team ABT Schaeffler Audi Sport, took the electric racing series championship lead with the win. The next race is on December 19 in Punta del Este (Uruguay).

Audi factory driver André Lotterer celebrated a triumphant end to the Superformula season. The WEC driver claimed his third victory of the season in the finale at Suzuka. The triple Le Mans winner started the first of the two race from pole position and crossed the finish line with a 5.894-second advantage after 20 laps. He also set the fastest race lap. Lotterer finished third in the overall standings of the hard-fought Japanese monoposto series.

A word from ... Miguel Molina

In this short interview, Miguel Molina looks back on his 2015 DTM season and talks about the many appointments that he has attended since the season finale in mid October.

After several podium finishes and pole positions, you finally took your first DTM victory this year. What’s your take on the season?

“All in all, it was a good year for me. It was fantastic at the Nürburgring finally to take my first win. I was one of the fastest Audi drivers at the majority of the races, but for various reasons couldn’t convert this into a solid result. This is why my position in the final standings doesn’t reflect what would have been possible.”

You’ve been very busy since the Hockenheim finale ...

“Yes, that’s right. The week after I visited the World Rally Championship event in Spain, which was very impressive. It was the first time that I was at a rally and it was an absolute highlight. Afterwards, I competed in my first triathlon of the year in Gavà. Normally I do this more often, but this year I just didn’t have time beforehand. Then I was at the Audi Award 2015 for the best Audi dealer in Barcelona and had a fitness test in Munich this week.”

And this coming week you travel to Hamburg to contest a 24-hour race for slotcars ...

Exactly. It’ll be the second time that I participate. I’m really looking forward to it. I’m a big slotcar fan and before now occasionally competed in races in Spain. Let’s see, perhaps I’ll start in another event at home in Spain in winter.”