Links
{{ activeItem() }}
Twitter
07/05/20
Meet the next Q generation: Make sure to tune in and watch the online #worldpremiere of the #Audi #Q4 Sportback… https://t.co/vKSPqJkRak
07/05/20
A real #classic – an Auto Union #oldtimer. Which historic #car do you like best? https://t.co/uSma7fu7t5
07/04/20
Visibly Audi, visibly e-tron: Mark your calendars for the online #worldpremiere of the #Audi #Q4 Sportback #etron c… https://t.co/2ZvMZrq42Z
07/04/20
Ready for the next mile - the #Audi #Q5 combines sportiness with excellent everyday usability. https://t.co/W6SnsI88zb
Audi on Twitter
07/03/20
“I think it was very positive and I learned a lot and now looking forward to Berlin.” – @ReneRastRacing after two d… https://t.co/bsnzk7j1Mt
07/03/20
MEDIAINFO: René Rast drives Audi Formula E car for the first time &gt;&gt; https://t.co/JjAduEuGeq… https://t.co/JhUnP0uvmd
07/03/20
High-resolution photos of @ReneRastRacing testing at the @Lausitzring_de are available in the Audi MediaCenter, pre… https://t.co/WkziEXAyFn
07/03/20
Our second day on track at the @Lausitzring_de. @LucasdiGrassi and @ReneRastRacing getting ready for the triple dou… https://t.co/jGHvsMFxXb
Audi Sport on Twitter
{{ activeItem() }}
Facebook
06/30/20
10 races with thrills, spills, banter and more: Looking back on the first season of the RCCO #RaceHome charity racing series with our DTM factory drivers competing for a good cause. #RaceHome #AudiTogether #etron #StayHome #PerformanceIsAnAttitude #RaceAtHome
06/29/20
From the virtual RCCO #RaceHome season finale, to picking up his new ride and racing at the Green Hell – a fun week for Nico Mueller in his latest #DriversDiary. >> audi.com/DTM >> audi.com/GT3 #RaceHome #AudiTogether #etron #StayHome #PerformanceIsAnAttitude #RaceAtHome -------------------- Audi RS 6 Avant: Combined fuel consumption in l/100 km: 11,7 (20.1) – 11,5 (20.5); combined CO2 emissions in g/km: 268 (431.3) – 263 (423.3); Information on fuel consumption and CO2 emissions as well as efficiency classes in ranges depending on the tires and alloy wheel rims used. // www.audi.com/dat
06/25/20
“That was the car I really loved to drive. I felt really confident in the new A4.” Together with Mattias Ekström, we’re looking back on the era of the Audi A4 DTM – the car that scored 5 DTM drivers’ titles for us. >> audi.com/DTM #PerformanceIsAnAttitude #AudiTogether
06/24/20
The first season of the RCCO #RaceHome charity racing series is in the books. Check out our race highlights and broadcast from WeatherTech Raceway Laguna Seca: >> bit.ly/2Vb03ww #RaceHome #AudiTogether #etron #StayHome #PerformanceIsAnAttitude #RaceAtHome
Audi Sport on Facebook 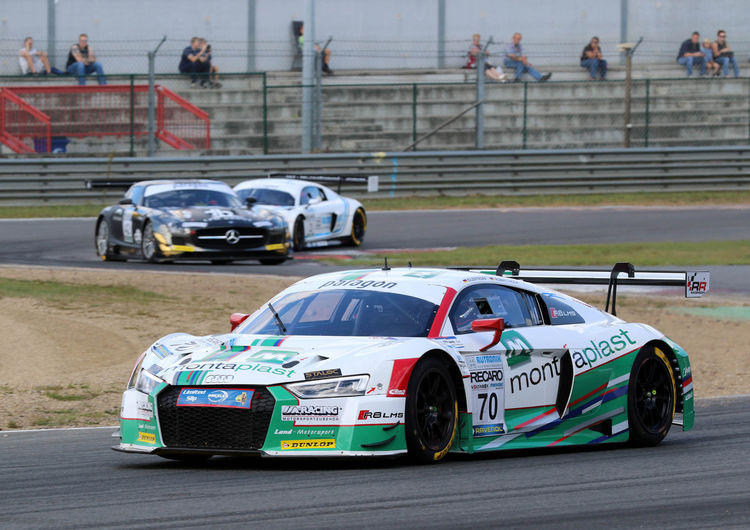 On the sixth race weekend of the DMV GTC at Zolder, Belgium, Audi customer teams celebrated two victories and three other podium places. In race one, “Ronny C’Rock” in the Audi R8 LMS of Land-Motorsport achieved a lights-to-flag victory and third place went to Tommy Tulpe (HCB-Rutronik Racing). In the second heat, “Ronny C’Rock” set the fastest race lap and took second place in front of his brand colleague Fabian Plentz. In the final “Dunlop 60” race, Tommy Tulpe and Fabian Plentz jointly clinched victory in the Audi R8 LMS of HCB-Rutronik Racing.

Overall and class victory in China

On the third weekend of the Chinese GT Championship, Team TSRT Shangxi Tian Shi with drivers Massimiliano Wiser and Wei’an Chen in the Audi R8 LMS ultra clinched overall victory in race one. In the GTC class, Team Ling Rui 300+ achieved a class win by David Zhu and Risheng Wang.

Successful weekend for Steven McLaughlan in the Victorian State Circuit Racing Championships (VSCRC) at Winton Motor Raceway: The Australian dominated in the Audi R8 LMS of Team Jamec Pem Racing in qualifying and won all three races. Ross Lilley in an Audi R8 LMS ultra finished as the runner-up twice.

Grand stage for current and former Audi race drivers at the Arosa ClassicCar: at the popular historic hillclimb race in Switzerland, Audi DTM drivers Timo Scheider and Nico Müller, Audi Sport ambassadors Frank Biela and Marco Werner as well as Rahel Frey, Edward Sandström, Yves Meyer and Harald Demuth thrilled their passengers in race taxi rides in various Audi models. On the 7.8-kilometer distance from Langwies to Arosa, the passengers experienced pure motorsport feeling in 66 corners and a difference in altitude of 422 meters.

Halfway through the FIA World Endurance Championship (WEC) season in Mexico Audi demonstrated good speed once more, but failed to reap the expected reward. How do you rate the team’s performance?

There were performances that were simply sensational. Pole position was a good beginning and all five drivers were really strong in the race – in the duels, in lapping on the narrow track and, finally, the rain made for difficult conditions. The team, too, did a top-class job and made a bold tire choice in changeable weather conditions that paid off. So, there are plenty of reasons for praise, as well as for self-criticism. We deprived ourselves of better results in Mexico because our reliability simply wasn’t right.

What does the result mean for the championship?

Lucas di Grassi, Loïc Duval and Oliver Jarvis continue to be our best-placed drivers. However, they dropped from second to third place and are now trailing the best Toyota drivers by two and a half points. 43.5 points separate them from the top of the standings. In the remaining four rounds, 104 points are yet to be awarded. In second place of the manufacturers’ championship, we’re short 43 points of the top spot, with 176 points yet to be awarded. The championship continues to be our goal.

Your aims for the next races?

At Austin, we’ve won twice since 2013. We’d like to build on that. It’s also great that, following Le Mans, we’ve been seeing extremely thrilling battles. We’re going to leave no stone unturned to keep it that way, to continue to extend our potential and to regain our reliability.