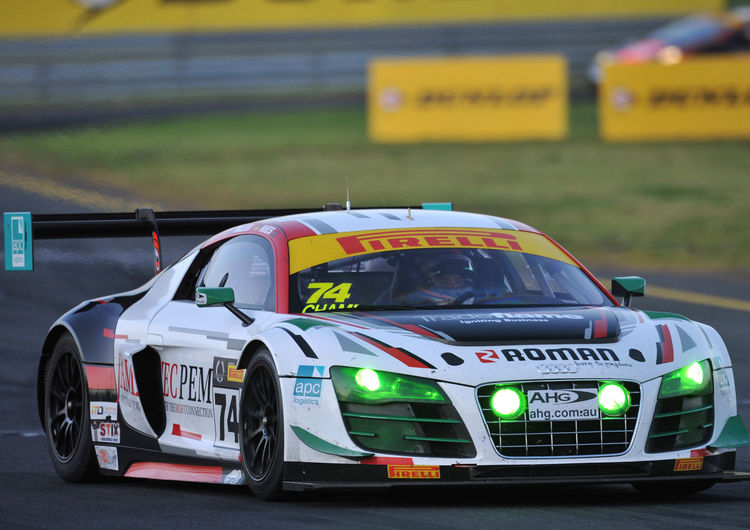 Successful showing by Christopher Mies in Down Under: the Audi driver, after clinching a third place and a victory at Sandown, took the lead in the Australian GT Championship.

Mies takes lead of the standings with victory in Australia

Christopher Mies has taken the lead of the standings on the fifth of six race weekends in the Australian GT Championship. Together with Ryan Millier, Mies in the Audi R8 LMS ultra of Team Jamec PEM Racing secured third place in race one. In order to increase speed on the long straight of Sandown Raceway, the mechanics altered the sports car overnight before race two. Their efforts proved successful as Mies/Millier clinched victory. Before the season finale in November, Mies is leading the drivers’ standings ahead of his Audi brand colleague Nathan Antunes. In the Trophy classification for older models, the Audi customer teams celebrated a victory as well. Greg Taylor and Barton Mawer in the Audi R8 LMS of Wall Racing won the second race. In round one, Mark Griffith in the R8 LMS of Griffith Corporation Motorsport achieved a third place in the Trophy class.

Tom Kristensen has won a race in the historic motorsport spectacle of the Goodwood Revival Meeting. The Dane, who triumphed nine times in the legendary Le Mans 24 Hours, participated in the ‘St. Marys Trophy’ for race touring cars from 1960 to 1966. After starting from the last position on the grid, Kristensen showed a tremendous recovery across the 17 race laps on the 3.8-kilometer Goodwood Circuit, in the end crossed the finish line as the winner, and subsequently had the enthusiastic fans celebrate him with a flat cap on his head and a cigar in his mouth. With a deficit of a little less than three seconds, Frank Stippler, who won the Nürburgring 24 Hours in 2012 with Audi, took third place. Emanuele Pirro, a five-time Le Mans winner with Audi, was forced to retire from the race.

Optimum Motorsport is the first team to have ordered the new Audi R8 LMS. The British outfit that has been racing in GT4 so far is planning two racing programs with its new GT3 race car in the coming season. The team intends to compete in the British GT Championship and to additionally contest the 24H Series scheduled to begin in Dubai in January. “The previous R8 has been successful around the world and the new R8 LMS has won the Nürburgring 24 Hours in its debut season,” says team boss Shaun Goff. “The work of Audi Sport customer racing with the obvious performance built into the car convinced us. Next, we’re seeking to sign a strong driver pairing.

Before the DTM races at Oschersleben, Audi driver Miguel Molina took a short side trip to Berlin. On Tuesday, the Spaniard signed autographs at the booth of Audi partner Teufel during the International Radio Exhibition (IFA) and during a tour of Europe’s major electronics trade fair enjoyed a demonstration of the loudspeaker specialist’s spectacular Thundertruck. On Wednesday, Molina visited Teufel’s headquarters at Berlin’s Bikinihaus before traveling on to Oschersleben.

During the Audi Sport TT Cup at Oschersleben, German sports stars got into the passenger’s seat of the Cup race car. Ski jumper Richard Freitag, world champion in the mixed competition of the 2015 Nordic World Ski Championships, Katharina Molitor, javelin throw world champion in the 2015 World Championships in Athletics, and Cindy Roleder, silver medalist in the 100-meter hurdles in the 2015 World Championships in Athletics, rode a lap in the 210-hp race taxi alongside TT Cup instructor Marco Werner and obviously had fun in unusual terrain. Their beaming faces following the test drive spoke volumes.

As part of the race weekend at Oschersleben, the permanent entrants of the Audi Sport TT Cup received an introduction to the successful GT3 sports car program at Audi Sport. Jürgen Zürn, Head of Racing Commitments at Audi Sport customer racing, provided the young drivers with insights into the GT program at AUDI AG. In addition to information about how test days are conducted and the tasks of a race driver during the course of the season, Zürn shared some anecdotes from his long career. The winner of the Audi Sport TT Cup can look forward to support within the GT3 program of the brand with the four rings.

A word from ... Hans-Joachim Stuck

The 1990 DTM Champion about his experiences at the wheel of the Audi RS 5 DTM race taxi.

As part of the DTM weekend at Oschersleben you had your first opportunity to drive a modern DTM race car. Your impressions?

It was simply incredible. If I had a hundred thumbs, all of them would be pointing upwards. I wouldn’t have imagined a modern DTM car to be so impressive. On Friday, I drove a few laps to get used to the car. At that time, the tires and the brakes didn’t have the right temperature yet. On Sunday, it was really great: the longer you drive, the better the brakes work and the tires reach their operating temperature as well. You get even more grip and can accelerate even earlier. I even managed a couple of cool drifts. But it’s also clear that a race driver would always like more power output. About 100 hp more wouldn’t hurt a DTM car.

Do you see the DTM with different eyes following this experience?

As far as driving goes, there’s no doubt about it. It’s extremely tough for the drivers. There’s not a lot of room for making your personal mark. This is about the famous thousandth. You can’t afford to make a single mistake, but if you do you’ll be in fifth place before you know it. I take my hat off to the young guys in this series. They’re fantastic. But I’ve got to say: I had a great time, too!

During the weekend at Oschersleben, you also had to sign a lot of autographs. Were you happy about the response?

I really appreciate that my fans were there – ‘thank you’ to all of them! As the saying goes, applause is the artist’s reward.

Would you drive the Audi RS 5 DTM race taxi again?

Absolutely! Always with pleasure. Audi just needs to call me. Unfortunately, this year it’s not possible anymore, but next year: yes, yes, yes!