Links
{{ activeItem() }}
Twitter
07/07/20
It's a Q, it's a Sportback, it's an e-tron: The all new #Audi #Q4 Sportback #etron concept speaks every language. D… https://t.co/h2ufFgEA0f
07/07/20
On the #road: Meet the new #Audi #Q4 Sportback #etron concept. https://t.co/b4Qn4CAivM
07/07/20
Unique and charismatic: After the #Audi #Q4 #etron concept we now present the Q4 Sportback e-tron concept. Both mod… https://t.co/Xstf6HdIYQ
07/07/20
Are you ready for the next Q member? We are unveiling the all new #Audi #Q4 Sportback e-tron concept. Watch the onl… https://t.co/umjRswioec
Audi on Twitter
07/07/20
Just under a month before @FIAFormulaE season 6 restarts in Berlin. More high-resolution photos of @LucasdiGrassi a… https://t.co/k9R9TbDQVE
07/07/20
Audi Sport driver @MattiaDrudi joins @audisportitalia for select rounds of the 2020 @CIGranTurismo (Sprint and Endu… https://t.co/1YNkhahkSL
07/06/20
Last chance: The third and final @rccoracehome PlayStation 4 is being auctioned this week: Our 6 @DTM factory drive… https://t.co/YyA0uMRdii
07/03/20
“I think it was very positive and I learned a lot and now looking forward to Berlin.” – @ReneRastRacing after two d… https://t.co/bsnzk7j1Mt
Audi Sport on Twitter
{{ activeItem() }}
Facebook
06/30/20
10 races with thrills, spills, banter and more: Looking back on the first season of the RCCO #RaceHome charity racing series with our DTM factory drivers competing for a good cause. #RaceHome #AudiTogether #etron #StayHome #PerformanceIsAnAttitude #RaceAtHome
06/29/20
From the virtual RCCO #RaceHome season finale, to picking up his new ride and racing at the Green Hell – a fun week for Nico Mueller in his latest #DriversDiary. >> audi.com/DTM >> audi.com/GT3 #RaceHome #AudiTogether #etron #StayHome #PerformanceIsAnAttitude #RaceAtHome -------------------- Audi RS 6 Avant: Combined fuel consumption in l/100 km: 11,7 (20.1) – 11,5 (20.5); combined CO2 emissions in g/km: 268 (431.3) – 263 (423.3); Information on fuel consumption and CO2 emissions as well as efficiency classes in ranges depending on the tires and alloy wheel rims used. // www.audi.com/dat
06/25/20
“That was the car I really loved to drive. I felt really confident in the new A4.” Together with Mattias Ekström, we’re looking back on the era of the Audi A4 DTM – the car that scored 5 DTM drivers’ titles for us. >> audi.com/DTM #PerformanceIsAnAttitude #AudiTogether
06/24/20
The first season of the RCCO #RaceHome charity racing series is in the books. Check out our race highlights and broadcast from WeatherTech Raceway Laguna Seca: >> bit.ly/2Vb03ww #RaceHome #AudiTogether #etron #StayHome #PerformanceIsAnAttitude #RaceAtHome
Audi Sport on Facebook 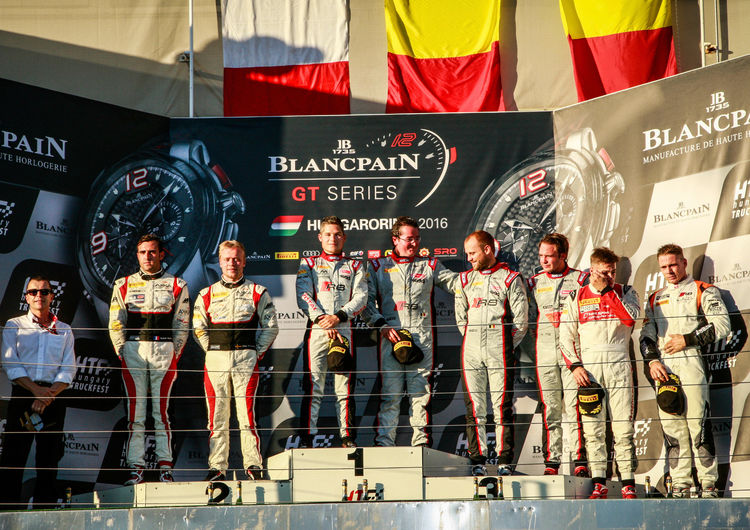 Good result for WRT in Hungary

At the penultimate round of the Blancpain GT Series Sprint in Budapest, the R8 LMS cars of Audi Sport customer racing team Belgian Audi Club Team WRT clinched four podium results. To start, Christopher Mies and Enzo Ide won the qualification race. Their team mates Laurens Vanthoor and Frédéric Vervisch finished third. In the main race at the Hungaroring, Mies/Ide were second and also took the lead in the drivers’ classification. René Rast and Will Stevens were third in another Audi R8 LMS fielded by WRT.

Greg Taylor and Nathan Antunes claimed a podium finish in the Audi R8 LMS fielded by GT Motorsport in the second of four Australian Endurance Championship race weekends. The duo started the 101 lap race around the Sydney Motorsport Park from seventh place before fighting their way up to third place.

Nine-time Le Mans winner Tom Kristensen competed in the European Tour golf tournament ‘Made in Denmark’ as part of a high-caliber team. The former Audi driver’s team was completed by HRH Crown Prince Frederik of Denmark, Søren Kjeldsen who is currently Denmark’s top golfer, as well as Lars Larsen, the owner of the Himmerland Golf & Spa Resorts in Farsø – the venue of the tournament. Playing in front of a crowd of more than 5,000 spectators, the quartet was delighted about fifth place in the ‘Royal Pro/Am’ class.

As Brazilian, you are the only Audi driver from an American country. The FIA WEC makes its debut shortly in Mexico, where you have already raced in another series this year. What are you expecting from next weekend?

We were in Mexico with the FIA Formula E in March. The event was just amazing. There were an enormous amount of spectators, but I think that even more spectators will be there for the FIA WEC. However, it’s not just about the sheer numbers. The fans are extremely enthusiastic. The Mexicans love motorsport and are looking forward to the WEC, in which a Mexican team also competes. The spectators bring a huge amount of energy with them to this race. I’m sure that we’ll have an unforgettable weekend together with them. And we also want to reward them with a great race.

What’s special about the track?

The sector through the stadium is unique. It’s unbelievable for us drivers to race through such a fabulously built spectator backdrop. I expect there to be many exciting maneuvers in the race, which will impress the fans. With the exception of one corner and the pit lane, the circuit is however completely different to the Formula E track we used six months ago. We use the entire facility and race on the 4.3 kilometer long version. At one point we reach around 300 km/h.

What will be the biggest challenge in Mexico?

The track is at an altitude of almost 2,300 meters. This alone makes it a challenge for our technicians because the air is much thinner. The aerodynamics, engine power and the cooling system are affected the most. It will also be physically more demanding for us drivers. Even so, I’m really looking forward to our debut in Mexico.