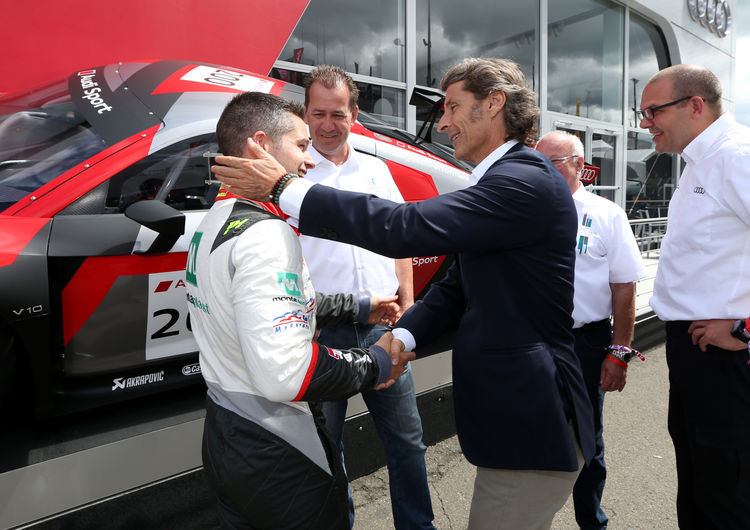 The Spa 24 Hour race weekend was marked by a milestone for Audi Sport customer racing. Stephan Winkelmann, Managing Director of quattro GmbH, and Chris Reinke, Head of Audi Sport customer racing, were on hand for the symbolic handover of the 200th Audi R8 LMS to its future team. Christian A. Stulz from Montaplast was happy to receive the „landmark“ R8 LMS that will be entered by Wolfgang Land from Team „Montaplast by Land-Motorsport“. Racing driver Christopher Mies attended the event, too. The team is currently second in the drivers’ and teams’ classification of the ADAC GT Masters.

Audi welcomed guests from other racing series at the Spa 24 Hour race. Vincent Vosse, the team principal from Belgian Audi Club Team WRT, invited Ralf and Sigrun Jüttner. Ralf Jüttner is the Head of Audi Sport Team Joest in the FIA World Endurance Championship WEC. Two guests even came from Australia to watch the race in Belgium. Troy Russell and Greg Taylor attended the 24 Hour race on site. Russell is the co-owner of Melbourne Performance Centre that runs the Audi R8 LMS in various Australian GT racing series. Taylor is an Audi privateer driver who successfully competes in the Audi R8 LMS „down under“.

Danish motorsport fans were well catered for at the weekend. In the Copenhagen city center, teams and drivers turned out with historic racing cars. Among the crowd Le Mans legend Tom Kristensen and Audi LMP driver André Lotterer. Kristensen and his brother took second place in a Cortina race touring car from the 1960s. André Lotterer also enjoyed the occasion even though another competitor got in his way on the track. In the ‘Race for Riget’, Tom Kristensen posed as taxi driver in an Audi R8 and chauffeured guests around a course and, in doing so, gave his support to a cancer charity initiative.

Audi Sport Ambassador Allan McNish was not only interested in the eleven Audi R8 LMS when visiting of the 24 Hours of Spa, the season highlight of the Blancpain GT Series. The three-time Le Mans winner also followed the FIA Formula 3 European Championship and presented the trophies on the rostrum after the second race of the single-seater series.

Timo Scheider kicks for a good cause

100,000 euros for a good cause were raised by a charity soccer match between the “Nazionale Piloti” and the “Nowitzki Allstars” in Mainz. The line-up of the race drivers’ team included Audi DTM driver Timo Scheider. In spite of a 6-9 defeat, the two-time DTM Champion was thrilled: “It was a cool soccer evening. I met an incredibly large number of pleasant people and had great fun.”.

You have three reasons to celebrate. What are you most pleased about?

We are proud of the performances of our customer teams representing Audi Sport customer racing. We celebrated overall victory at Spa in the manufacturers’ classification ‘Coupe du Roi’. The performance of every team in the Pro, Pro-Am and Am categories is taken into consideration for this trophy. We would never have won this title without our customers. We are also delighted for I.S.R. Racing and its second place in the Pro-Am classification. Igor Salaquarda’s team has not been part of the Audi Sport customer racing family for so long, but earned this success through good work. And lastly, Audi Sport Team WRT staged a genuinely fascinating fightback. To unlap yourself three times and come back from 42nd overall to finish on the podium is a fantastic performance.

So many teams had never previously started the 24 Hours of Spa with Audi. What does this success mean for you?

The manufacturers’ classification reveals: nowhere in the world is there such a good grid with so many GT3 sports cars, and it’s an honor that so many teams rely on Audi. Eleven of the world’s best sports car brands were gathered at Spa and put 65 cars on the grid. We were the brand with the second highest amount of race cars. There is no better advert for our GT3 program than the trust shown by the teams. In the lead up to the race, we also welcomed different customers from other series’, including a driver from Australia. And at Spa we handed over the 200th GT3 race car that the crew at Audi Sport customer racing built.

What are the next goals for Audi Sport customer racing?

There are still plenty of events to come on the calendars of our customers in Australia, Asia, Europe and America. Different teams are also fighting for championship titles this year, and things are very tense in our one-make cups Audi R8 LMS Cup and Audi Sport TT Cup. And there are still some important races to come this year, including the FIA GT Cup at Macau in November.