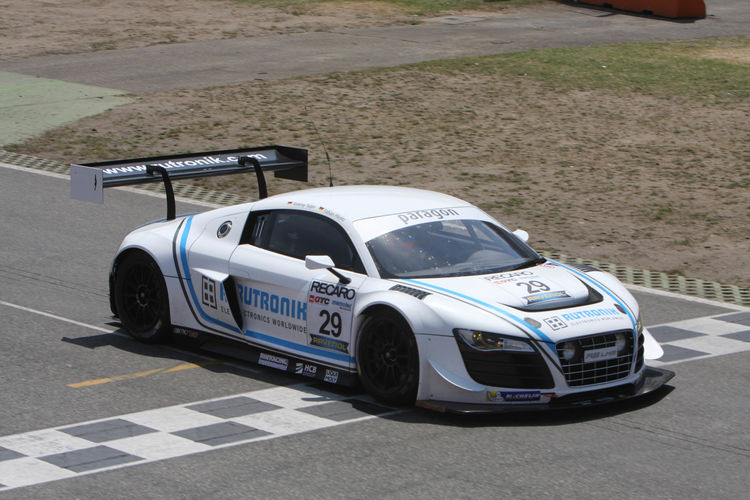 Strong performance in the DMV GTC: At the end of the fifth round of the season at the Hockenheimring, Fabian Plentz and Tommy Tulpe in the Audi R8 LMS ultra won the 60-minute race. For the duo from Team HCB Group, this was the second consecutive victory. When the flag fell, the number 29 sports car had a comfortable advantage of 36.463 seconds. In class, André Krumbach and Dietmar Haggenmüller from Team Spirit Racing managed the leap onto the podium in third place. In each of the two previous sprint races, ‘Maximilian Stein’ took second place in class.

To the racetrack with the Audi Sport Racing Bike

Christian Mamerow thoroughly enjoyed himself on the Audi Sport Racing Bike at the Spa 24 Hours, where he cycles from his hotel to the racetrack. With a weight of only 5.8 kilograms, the extremely lightweight carbon-bicycle is a very practical travel companion. “I am a very enthusiastic cyclist,” says Mamerow, who is participating in the endurance classic with an Audi R8 LMS entered by Audi Sport Team Phoenix. “Not only do I train by cycling, but I also use my bike for my daily commute in the city.”

Audi Sport Team WRT had some special female guests during the 24 Hours of Spa. Former tennis player and current TV host Marlène de Wouters and Alizée Poulicek, Miss Belgium 2008, visited the pits of the Belgian team during the race. Charles-Henri Bonnet, the chairman of the Belgian Audi Club, offered the Belgians an exclusive look behind the scenes during the long distance classic.

Rarely before did the Audi Sport customer racing staff have to perform so many tasks as at the Spa 24 Hours. Apart from the sheer number of race cars, the task list was also increasingly complex. In addition to the six previous generation R8 LMS ultra cars, four new Audi R8 LMS cars had to be cared for as well. A total of 10 GT3 race cars run by five teams were looked after by 14 employees of Audi Sport customer racing in the areas of parts logistics and customer racing consultancy. Three semitrailers were loaded with 5,000 different parts in the respective quantities. Each truck transported around tens tons of spare parts – from screws to bodywork. In addition, mechanics, engineers and other staff were on site. The employees in charge of customer relations also welcomed clients from Asia and Australia at Spa, including race drivers Steven McLaughlan and Marc Cini.

Timo Scheider in the spotlight

A week before the DTM round at Spielberg, Austria, Timo Scheider contested an unusual race. In gorgeous weather and in front of a full house at the ‘ZDF Fernsehgarten’ TV show, the two-time DTM Champion raced three laps in an Audi RS 5 DTM across the studio complex against his DTM rival Maximilian Götz. The kicker of the show was that both DTM drivers had prominent passengers who had to peel as many hard-boiled eggs as possible during their speedy ride. The passenger in Scheider’s Audi RS 5 DTM, which sported a special livery on the occasion of Audi Sport’s first participation in the DTM 25 years ago, was pop singer Linda Hesse. Everyone had plenty of reason to be happy after the fun race: the Audi factory driver was the first to cross the finish line and the competition presented the larger number of peeled eggs.

Le Mans record winner Tom Kristensen was a guest at the British Senior Open golf tournament in the UK. In Sunningdale southwest of London, he participated in the ProAm competition before the Major tournament alongside the Swedish golf pro Jesper Parnevik. The ProAm competition featured high-caliber golfers such as Bernhard Langer, Gary Player, Sir Nick Faldo and many others. During the event, the American sports commentator Jim Nantz welcomed the former tennis players Rod Laver and Tim Henman, as well as Tom Kristensen, to an interview session.

The Head of Audi Sport customer racing about the podium success in the Spa 24 Hours.

Your teams have clinched two podium places at Spa, plus Audi has won the ‘Coupe du Roi’ manufacturers’ title. A reason to rejoice?

We definitely have reason to rejoice on this race Sunday. Obviously, we competed to win. But in the battle with many strong rivals we don’t have to be sad about positions two and three either. The ‘Coupe du Roi’ trophy underscores the performance of the Audi brand in a field of eleven manufacturers and 57 race cars. The customers who watched our performance at the venue confirmed to us how attractive the new Audi R8 LMS is as well. Its performance capability is beyond debate. All four new cars finished the race, with two of them on podium.

You have completed an important stage in the development of the second-generation Audi R8 LMS with your team. What are the next steps?

Our new race car has clinched a victory, a second and a third place in endurance racing in the space of ten weeks now – split between the two toughest 24-hour races for GT3 models in Europe. This has set an important milestone. Following an in-depth analysis of the race cars from Spa, we’re going to establish the final specification for sprint and endurance races. In September, the production of the new Audi R8 LMS for our customers will be launched, followed by marketing the car.

In sporting terms, the Spa 24 Hours were challenging. Your teams and drivers delivered a tremendous performance. Your assessment of this year’s running of the race?

It was a competition of the type you wish for. A large and high-caliber field on a legendary track, plus the team performance by Audi Sport Team WRT and Audi Sport Team Phoenix as well as the showing by our customers – that was high-class racing. Sincere congratulations also to Team Parker Racing, which as a customer team clinched victory in the Am category on its own power. We’ve experienced a good weekend.