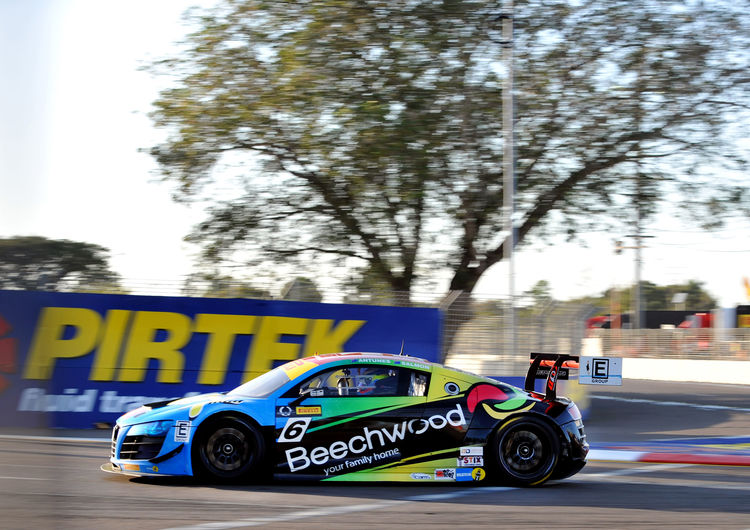 Successful weekend for the Audi customer teams in Australia and Italy: In the Audi R8 LMS ultra, they took a victory and two podium places.

Commanding victory by Nathan Antunes in Australia: In race two of the Australian GT Championship round held on the city street circuit in Townsville, he celebrated his third win of the season with a more than ten-second advantage in the Audi R8 LMS ultra. Previously, the Australian on taking fourth place in the first race had barely missed the podium. In the Trophy Class, Mark Griffith in the Audi R8 LMS finished race two as the runner-up, ahead of his brand colleagues Greg Taylor and Barton Mawer.

Podium success in Italy: On the fourth race weekend of the Italian GT Championship at Mugello, the drivers of Audi customer team Audi Sport Italia were battling for victory in both races and clinched two podium places. In race one, Dindo Capello and Emanuele Zonzini in their Audi R8 LMS ultra took second place. In the second race, their team-mates Marco Mapelli and Andrea Amici finished as the runners-up as well. Capello/Zonzini, who had crossed the finish line in third place, dropped to fourth position due to a retroactive time penalty.

Success for WEC driver Filipe Albuquerque in the European Le Mans Series (ELMS): Together with his British team-mates Simon Dolan and Harry Tincknell the Portuguese in an LMP2 sports car of Team Jota Sport won in round three of the season at the Red Bull Ring in Austria.

The Audi drivers and their cars that were successful at the 24-hour races at the Nürburgring and Le Mans visited the Neckarsulm factory on Wednesday. Edward Sandström and Laurens Vanthoor, who were part of the winning quartet in the Eifel, were kept busy signing autographs during the employee event, as were Marcel Fässler, André Lotterer and Benoît Tréluyer. The factory driver trio finished third in the Audi R18 e-tron quattro at Le Mans in June. The LMP1 sportscar, as well as the Audi R8 LMS that won at the Nürburgring – driven by Fässler and Sandström respectively – spooled off several demonstration laps around the factory premises with the enthusiastic employees looking on. The drivers were also guests at the workers’ assembly.

The Audi drivers Benoît Tréluyer and Marco Bonanomi used the summer break in the FIA World Endurance Championship (WEC) for some sporting activities. Bonanomi, in a triathlon sprint in his hometown Lecco (Italy), an Italian Championship round, set a personal best time of 1h 03m 23s and took 50th place overall in a field of 380 participants. In Sirmione, Italy, at the end of June, he had completed a triathlon covering the Olympic distance in 2h 17m 50s. Benoît Tréluyer competed in a mountain bike event in Les Deux Alpes, France, this weekend.

Jamie Green’s ‘vehicle fleet’ has been enlarged by two Audi models. At Zandvoort, the DTM leader of the standings took possession of two new Audi Junior quattro cars sporting the distinctive black Audi Sport graphics. “It was high time for our two sons to finally starting driving an Audi too,” said the Audi driver. To their father’s delight, Zachary and William Green immediately tried out their new toys with intensity in the paddock at Zandvoort.

With a recovery from position 16 on the grid straight into the points, Mattias Ekström thrilled the DTM fans at Zandvoort. The Audi driver in a brief interview.

You’ve scored four wins at Zandvoort, including your first-ever DTM victory. This said can you be happy about a seventh place now?

Normally not, but today I can. I gave my best, made up nine places during the race and had several great duels in the process. Six points may not sound like much at first glance, but in a few months from now they may be worth a mint. With its tight turns and large number of duels, Zandvoort always harbors a great risk. Looking at three drivers from the top five in the Championship having finished out of the points throughout the weekend, we can be slightly pleased for a change.

What are your expectations for the weekend at Spielberg in three weeks from now?

For me the weekend at Spielberg is a home round because, besides the races, I’ve visited many special events there before. I really like the track. Qualifying at Zandvoort on Sunday was a shortcoming, which may have been due to the fact that I missed the entire warm-up for preparation because of a minor defect. We’re going to concentrate even more intensively on achieving an optimal grid position for both races, followed by two tough but fair races and maximum points – that’s our plan.

After four weekends, what do you think of the new DTM format with two races per weekend?

I’ve always wanted to drive as many races as possible. Now we’ve got 18 per season, which is a tremendous number. The new format puts a lot of pressure on all the mechanics, engineers and drivers. But I must admit: going to bed on Saturday night after a bad day and knowing you’re going to have a new opportunity the next day – that has a nice ring to it!

You’re not only competing in the DTM but also in the World Rallycross Championship with your own team. How do you manage switching between these two worlds?

For me the rallycross races are active recuperation. I have a lot of fun, enjoy the sporting competition and teamwork and, at the same time, keep up my fighting spirit. Obviously, a victory like last weekend in Sweden boosts my motivation, if for no other reason than the good mood it puts me in. I’ve driven a lot of different cars in my career and it’s never taken me long to readjust.