Links
{{ activeItem() }}
Twitter
08/11/20
Dynamic character from the very first glance – meet the new #Audi #S3 Sportback. https://t.co/OmYijs0xE6
08/11/20
A new generation of S3 models: The #Audi #S3 Sportback and the Audi S3 Sedan now offer more dynamic, more #power, a… https://t.co/w0vPrMy5vR
08/08/20
At #Audi, we live #sustainability. We want to help achieve the Paris #climate targets by reducing our #CO2 footprin… https://t.co/6S7hEsYksK
08/06/20
#Hardware meets #software: The Electronic Chassis #Platform interlinks mechanical chassis components. That way… https://t.co/Ej9YMVqjvG
Audi on Twitter
08/12/20
Welcome to Wednesday, the penultimate race day of season 6 here in Berlin. &gt;&gt; https://t.co/ktQ0jleme7… https://t.co/VVwODVSHLa
08/11/20
Tomorrow: Race day. &gt;&gt; https://t.co/ktQ0jleme7 #PerformanceIsAnAttitude #ABBFormulaE #FormulaE #BerlinEPrix… https://t.co/2KjxtbAGLd
08/11/20
Final track walk of season 6 completed. Having a close look at the new layout that we’ll be racing on for rounds 10… https://t.co/iEEkwHXyn5
08/11/20
A big thank you to @polizeiberlin for helping us with the police escort through the city of Berlin. We had a blast.… https://t.co/EuYDxEtNPs
Audi Sport on Twitter
{{ activeItem() }}
Facebook
08/11/20
Victories for the Audi R8 LMS in the GT World Challenge Europe at the Misano World Circuit highlighted a weekend with wins and podiums around the world. Well done to our customers. 🇮🇹 🇩🇪 🇨🇳 🇷🇺 🇧🇪 🇿🇦 🇸🇪 🇺🇸 >> audi.com/GT3 >> audi.com/GT4 >> audi.com/TCR #PerformanceIsAnAttitude
08/10/20
Before heading to Lausitzring this weekend, let’s have a quick look back on the DTM safety measurements at the track in Nico Mueller’s latest #DriversDiary. >> audi.com/DTM #PerformanceIsAnAttitude #ThanksToDTM
08/10/20
We will be back racing at the Lausitzring for the next two weekends. Let’s have a look back on our history at the circuit. >> audi.com/DTM #PerformanceIsAnAttitude #ThanksToDTM
08/03/20
What a start to the DTM season it was for Nico Mueller! Race victory and he is currently leading the drivers’ standings. See how he experienced the weekend in his latest #DriversDiary. >> audi.com/DTM #PerformanceIsAnAttitude #ThanksToDTM
Audi Sport on Facebook 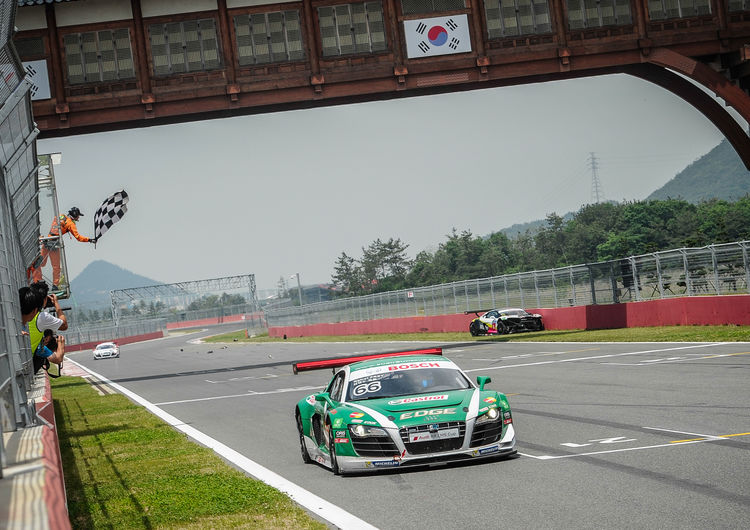 The fans of the Audi R8 LMS Cup in South Korea witnessed an action-packed round two of the season. On making his racing debut in the Asian one-make cup, Jean-Karl Vernay shone with two pole positions and victory in the first race on Saturday. Behind him, Thomas Fjordbach and Ryo Fukuda took positions two and three. A brilliant recovery in the second session was shown by Rahel Frey. After problems on Saturday, the Swiss converted her 15th place on the grid into victory on Sunday. In doing so, she also benefited from a penalty imposed on Vernay. Aditya Patel from India, who finished race two behind Kyong-Ouk You in third place, is leading the overall standings.

A successful weekend for Audi customer team Absolute Racing: In the GT Asia Series season opener at the Korea International Circuit in Yeongam, Jerry Wang in the Audi R8 LMS designated as car number 23 was unbeatable in the GTM class. The driver from Absolute Racing celebrated class victory in both races.

Nine-time Le Mans winner Tom Kristensen, and his team Max El, took a class win at the Danish Rold24race in the Rebild National Park in north Jutland. Kristensen and his team-mates, including race driver Marco Sørensen, completed 38 laps of the grueling event, totaling 444.22 km at an average speed of 18.76 km/h. It was a 24-hour mountain bike race that attracted 800 of Denmark’s toughest competitors.

Audi has rewarded Nicolaj Møller Madsen for his good job in the Audi Sport TT Cup. The Danish racing driver led the „social media buzz ranking“ after the season opener. As a reward Nicolaj Møller Madsen, who lies second in the championship, was presented with two VIP tickets for the Nürburgring 24 Hours. Just before the start of the endurance race, he did a lap of honor in the 310 hp Audi TT cup car on the Nordschleife.

Guests from Asia and Australia added an international touch to Audi Sport customer racing at the Nürburgring. Souken Nomoto and Seiji Hirai from Audi Team Racing Tech visited the 24 Hour race in Germany’s Eifel region. The team is contesting the Japanese Super GT Championship and also relies on Christian Mamerow as a driver. Troy Russell and Lee Burley, the owners of Melbourne Performance Centre – Audi Sport customer racing’s satellite in Australia – also made it all the way to Germany. Rene Koneberg, Managing Director of Audi Hong Kong, and invited journalists from Hong Kong followed the race of Congfu Cheng, Marchy Lee, Shaun Thong and Alex Yoong with the Audi race experience at the Nürburgring.

A word from ... Heinz Hollerweger

The managing director of quattro GmbH about the victory of the new Audi R8 LMS in the 24-hour race at the Nürburgring and the successful premiere of the Audi Sport TT Cup.

The first fielding of the new Audi R8 LMS in the 24-hour race at the Nürburgring resulting in an immediate victory – was this to be expected?

This was probably not to be expected, especially when you hit the track with such a new car. Of course we intensively worked toward this race and every one of us was hoping to win. But it wasn’t something we should have expected.

Impressive for a lot of people was the fact that the new R8 LMS was running without any technical issues whatsoever – that’s something that can’t be taken for granted with a new car, especially not on the Nordschleife.

You’re right, that’s definitely not to be taken for granted. Of course we intensively prepared and did a lot of testing. We also made a few improvements in recent weeks. But with a new car there’s always a certain amount of uncertainty left. So, as far as that’s concerned, we’re happy that the cars ran as reliably as they did. Obviously, we’re now going to take them apart and look at what else we may be able to improve for the next races and particularly before delivering them to our customer teams.

The victory in the 24-hour race happened right in time for the start of the advance sale of the new production R8.

You couldn’t wish for a car to have a better start. The advance sale began a week ago – and now this victory. That a new race car and the production model are being presented at the same time has never happened before in Audi’s history.

What has been the response by the customer teams to the new R8 LMS?

It’s been very positive even before this weekend. But of course we’re now under pressure to build and sell even more cars due to this victory. But you couldn’t wish for a better type of pressure than this.

This victory should also be a sweet reward for the squad that worked hard in the past weeks and months.

Yes, absolutely. We really have to thank everyone who helped achieve this. Not only the people who were part of the trackside crew this weekend but also those who ran the preparations and tests behind the scenes and fed the final preparations into the process, especially the teams of Ernst Moser, Phoenix, and Vincent Vosse, WRT. Both of them with their squads gave everything to make this victory possible.

In parallel with the new Audi R8 LMS, the Audi Sport TT Cup was launched – the new one-make cup saw a successful start as well.

In motorsport, we’re really enjoying a certain run of success at the moment, but there’s no reason to get carried away. We simply have to keep up our straightforward approach and continue to further develop the Audi Sport TT Cup and the new Audi R8 LMS. In either case, this amounts to hard work.