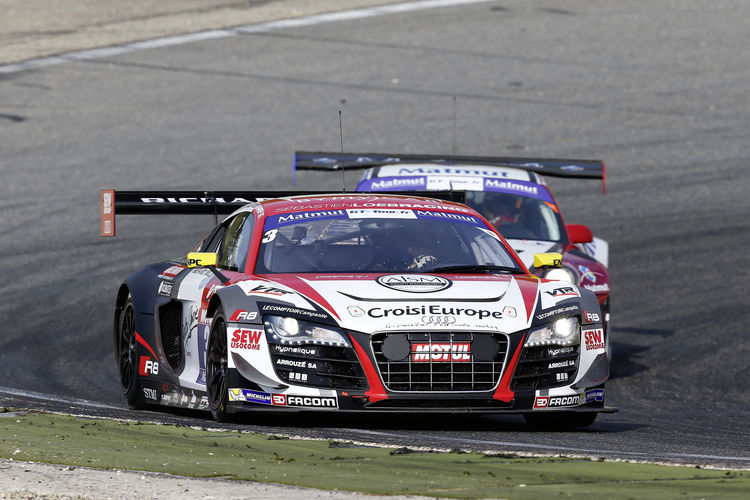 At the first encounter in the French GT Championship, the Audi customer team Sébastien Loeb Racing claimed a second place.

Audi customer team Sébastien Loeb Racing started the 2015 French GT Championship season in fine form. In the first race at the Circuit de Lédenon, the three Frenchmen David Hallyday, Philippe Gaillard and Mike Parisy took a well-deserved second place. Directly at the start of the 90-minute race, the #3 Audi R8 LMS ultra was involved in an exciting four-way battle. In the end, the Loeb trio were only six seconds behind the winners. The second race was cancelled due to heavy rainfall.

At Le Castellet, Audi has achieved another important milestone before heading to the Le Mans 24 Hours. Audi Sport Team Joest has traditionally been running a major endurance test on the high-speed track in southern France to prepare for the loads acting on the cars at Le Mans. The Le Mans specification of the latest generation of the Audi R18 e-tron quattro was used in the test, with aerodynamics designed for the high average speeds of more than 240 km/h per lap at Le Mans. All nine Audi LMP race drivers, Marcel Fässler, André Lotterer, Benoît Tréluyer, Lucas di Grassi, Loïc Duval, Oliver Jarvis, Filipe Albuquerque, Marco Bonanomi and René Rast, plus reserve driver Mike Rockenfeller, shared driving duties, reeling off a total of more than 6,500 test kilometers from Monday to Thursday. “Having checked off every item on our list, plus impeccably performing a 30-hour endurance run, we achieved our aims,” says Chris Reinke, Head of LMP at Audi Sport. “In addition, our drivers were able to gather a lot of driving experience at the wheel of the latest version of our race car. It’s been a successful test.”

Two weeks before the start of the Audi Sport TT Cup, preparations for the new Audi one-make cup are now on the ‘finish straight.’ All 24 race cars have been assembled for the inaugural event. Currently, they are in the process of receiving their liveries for the first race weekend at the Hockenheimring and are being set up for rounds 1 and 2 at the beginning of May. The graphics of the six guest driver vehicles that will be on the grid as part of the DTM season opener supporting program will feature a special design and be a surprise.

A word from … René Rast

At Silverstone, you were part of the team throughout the weekend. How important was this with respect to Spa and Le Mans?

The visit to Silverstone was an important part of my preparation. This was my first opportunity to get a taste of everything that goes on during a WEC race weekend and to watch the way my team-mates work and deal with various situations. This has given me some insight and an idea of what to expect at Spa, so now I’m really excited about my first race.

How has your onboarding in the Audi sports car family been going since your signing was announced last December?

Tremendous. I’ve been a member of part of the Audi family, Audi sport customer racing, for several years, so I already knew many of the drivers and technical crew members and it’s been a smooth transition. I instantly felt comfortable and again felt the warm welcome and immediate gelling with the team that makes Audi so special.

What does the Le Mans 24 Hours mean for you?

I suppose I feel about it the way most race drivers do. At least in Europe, Le Mans is the most important and most legendary car race. It’s always been one of my dreams to be on the grid there one day. This dream came true last year and I was able to gather initial experiences in the LMP2 category – which was even more impressive than I’d imagined. I’m tremendously proud about competing there for Audi this year.

The ‘dress rehearsal’ for Le Mans will be at Spa where you’ve won before in an Audi R8 LMS ultra. Will that be helpful for your race in the R18 e-tron quattro?

It definitely won’t hurt to contest your first race on a track you’ve got fond memories of. I’ve had many great moments there, including my two victories. I know the track really well, so it’s a perfect place for my first race in the Audi R18 e-tron quattro.