Links
{{ activeItem() }}
Twitter
08/12/20
#WhatsUpAudi on a secret mission: Discover the process behind the #Audi camouflage #design and how it sets the tone… https://t.co/4989jovfiy
08/12/20
quattro and #etron – a powerful combination of high #performance and notable economy. The #electric #quattro in the… https://t.co/MRA8Tq17uv
08/12/20
Quattro and #etron – a powerful combination of high #performance and notable economy. The #electric #quattro in the… https://t.co/yTGjQhUGSL
08/11/20
Dynamic character from the very first glance – meet the new #Audi #S3 Sportback. https://t.co/OmYijs0xE6
Audi on Twitter
08/13/20
The final RACE DAY: Good morning and welcome to Berlin for the season 6 finale. &gt;&gt; https://t.co/ktQ0jlvX5F… https://t.co/8b4dOorYgb
08/12/20
“Yeah, very, very happy. Third place, my first podium in Formula E.” – @ReneRastRacing. More from him,… https://t.co/wgaJ7TisrR
08/12/20
Fanboost is open for round 11 of @FIAFormulaE in Berlin. Vote for @LucasdiGrassi and @ReneRastRacing: &gt;&gt;… https://t.co/QxTqG36A7o
08/12/20
Our position in the teams’ standings with one race to go in the 2019/2020 @FIAFormulaE season. &gt;&gt;… https://t.co/9ZYmWo7wfz
Audi Sport on Twitter
{{ activeItem() }}
Facebook
08/11/20
Victories for the Audi R8 LMS in the GT World Challenge Europe at the Misano World Circuit highlighted a weekend with wins and podiums around the world. Well done to our customers. 🇮🇹 🇩🇪 🇨🇳 🇷🇺 🇧🇪 🇿🇦 🇸🇪 🇺🇸 >> audi.com/GT3 >> audi.com/GT4 >> audi.com/TCR #PerformanceIsAnAttitude
08/10/20
Before heading to Lausitzring this weekend, let’s have a quick look back on the DTM safety measurements at the track in Nico Mueller’s latest #DriversDiary. >> audi.com/DTM #PerformanceIsAnAttitude #ThanksToDTM
08/10/20
We will be back racing at the Lausitzring for the next two weekends. Let’s have a look back on our history at the circuit. >> audi.com/DTM #PerformanceIsAnAttitude #ThanksToDTM
08/03/20
What a start to the DTM season it was for Nico Mueller! Race victory and he is currently leading the drivers’ standings. See how he experienced the weekend in his latest #DriversDiary. >> audi.com/DTM #PerformanceIsAnAttitude #ThanksToDTM
Audi Sport on Facebook 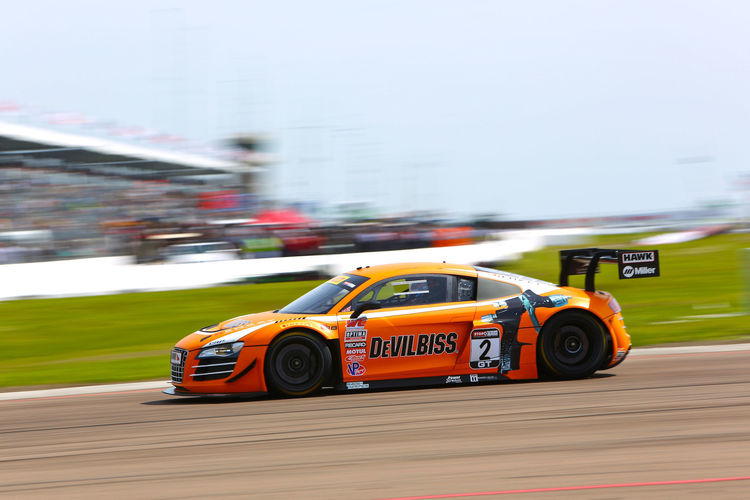 First podium place for an Audi customer team in the 2015 season in North America: Mike Skeen, the runner-up in the 2014 Pirelli World Challenge, continued his successes from last year in the Audi R8 LMS ultra on the city street circuit in St. Petersburg.

Audi driver Mike Skeen achieved a podium place on the second race weekend of the Pirelli World Challenge on the city street circuit in St. Petersburg (Florida). The runner-up in the 2014 season in his Audi R8 LMS ultra of Team CRP Racing took third place in the first race. In the second session on the difficult city street circuit, he was running in fourth place but lost a lot of positions in the final stage after contact with another car.

The Belgian Audi Club Team WRT announced its program for the 2015 season Baudour (Belgium). The squad that won six of seven titles in the Blancpain GT Series last year will be competing in the Blancpain Sprint Series with four Audi R8 LMS ultra and with three cars in the Blancpain Endurance Series. The driver line-up includes long-standing WRT drivers such as title defender Laurens Vanthoor, Stéphane Ortelli, Frank Stippler and Edward Sandström, plus new drivers such as the 23-year-old Durchman Robin Frijns and the French GT driver Jean-Karl Vernay.

In the Nürburgring 24 Hours (16–17 May) the Audi race experience is fielding two Audi R8 LMS ultra cars. For the first time, Audi Sport customer racing Asia is putting four drivers from Asia on the grid: the current Champion of the Audi R8 LMS Cup, Alex Yoong, the 2012 Champion Marchy Lee, Shaun Thong from the Audi Sport TT Cup and the seasoned campaigner ‘Franky’ Cheng Congfu will be sharing the cockpit of an Audi R8 LMS ultra and contesting the qualification race on April 12 as well. While Lee, Cheng and Thong will be entering the iconic endurance race in the Eifel as rookies, Alex Yoong already made his debut in the Nürburgring 24 Hours in 2012. Their team-mates will be the experienced GT race driver Rod Salmon from Australia, Niki Mayr-Melnhof (Austria), Ronnie Saurenmann (Switzerland) and Micke Ohlsson (Sweden).

The VLN Endurance Championship Nürburgring season opener was overshadowed by a severe accident. The vehicle of a participant took an off-track excursion and careered into a group of spectators. Several fans were injured in the incident and one of them subsequently succumbed to his serious injuries at the Medical Center. The race was stopped after the accident. “Our thoughts are with the families of the spectators affected,” said Romolo Liebchen, Head of Audi Sport customer racing. “On a day like this, the sporting action is secondary.”

Audi Brazil invited local media to a press conference with Lucas di Grassi three weeks before the beginning of the FIA World Endurance Championship (WEC). Last year’s Le Mans runner-up took advantage of the opportunity to meet with about 40 members of the media in his native São Paulo. Lucas di Grassi is sharing the #8 R18 e-tron quattro with the Frenchman Loïc Duval and the Briton Oliver Jarvis this year. “Interest in my home country in Le Mans, as well as in endurance racing in general, has been growing year after year,” said a pleased di Grassi.

The WEC will start at Silverstone in two weeks from now. Audi Sport performed a final pre-season test in the Prologue at Le Castellet. How would you sum it up?

During the tests, we consistently executed our planned program. The two Audi R18 e-tron quattro cars completed more than 2,500 kilometers and gathered valuable findings for the final pre-season preparation in the process. All six drivers reeled off their laps and the whole team practiced their operations and pit stops. We were able to gain a few more findings and to prioritize the things that still need to be done before Silverstone.

What distinguished the test in France from the previous tests in Spain and Florida?

At the official FIA WEC Prologue, we met with our competitors for the first time this year. Of course it’s not possible to assess how the relative strengths are going to pan out on the tracks of the WEC calendar just based on a single joint test. Nevertheless, the two days at Le Castellet were very valuable for us. Due to the participation of so many teams in the test the on-track situation resembled the conditions in a race, with heavy traffic, numerous overtaking maneuvers and, for example, a lot of pickup from the tires on the track.

What’s next on the agenda?

On Sunday, the race cars will be returning to Neuburg. On Monday morning, we’re going to start working on the two race cars we’ll be fielding at Silverstone. They’ll be disassembled, serviced and reassembled. We want to finish this job within the space of four days in order to make it possible for the squad to have a free Easter weekend. On Easter Monday, Audi Sport Team Joest will start traveling to Silverstone. Everybody is already looking forward to the season opener.