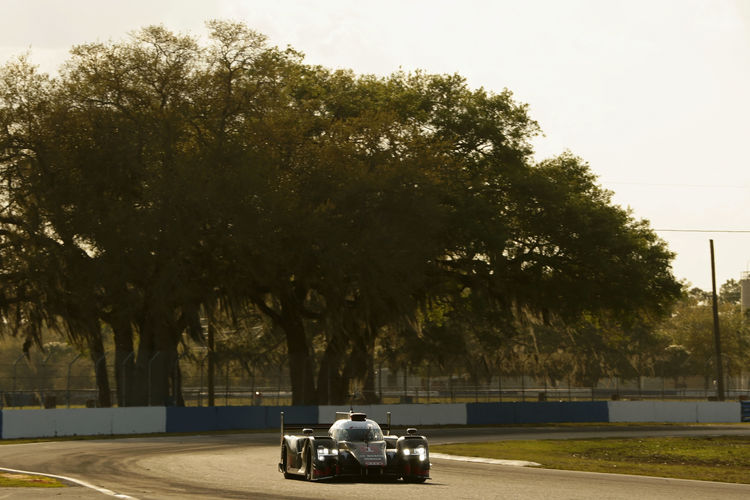 For all four motorsport projects of AUDI AG the past week was a particularly intensive one: The DTM tested in Portugal, the LMP squad at Sebring and the Audi Sport TT Cup at Barcelona. In Geneva, the new Audi R8 LMS celebrated its world premiere. The GT3 sports car can be publicly seen on a race track for the first time next Saturday.

Audi has continued its pre-season preparations for the FIA World Endurance Championship (WEC) with a test on the track at Sebring, USA, during the first week of March. All nine LMP race drivers reeled off a total of more than 6,000 kilometers in a test version of the new Audi R18 e-tron quattro on five test days. On the unrelenting circuit in Florida, which due to its characteristics is regarded as an extremely tough test track, the main focus was placed on durability. In optimal weather conditions at Sebring, the squad of Audi Sport achieved the goals it had set for itself. “All the drivers were enthusiastic about the car,” said Chris Reinke, Head of LMP in summing up the tests. “Our Le Mans prototype for this year is an evolution. In spite of this, the drivers agreed that they felt improvements in so many areas that you could almost call this a new car. The new aerodynamics, for example, in combination with the excellent work of our tire partner Michelin, makes enhanced performance possible.” All manufacturers will meet for the first time at an official joint WEC test, the prologue, at Le Castellet (France), on March 28.

Prominent appearance at the Geneva Motor Show: Together with Prof. Dr. Ulrich Hackenberg, Member of the Board of Management for Technical Development of AUDI AG, Rahel Frey, Edoardo Mortara and Tom Kristensen presented among others the new Audi R8 LMS. The nine-time Le Mans winner, who has just recently ended his career, was previously featured in an emotional film with a selection of the trophies he won and thus put the visitors in the mood for the next generation of the R8. On the same day, the production car was unveiled not only in Geneva but also at the Audi Cities in Berlin and in London. Kristensen’s former team-mates Frank Biela and Emanuele Pirro attended these events as guests.

Premiere for new Audi R8 LMS in the Eifel

Following the unveiling of the new Audi R8 LMS at the Geneva Motor Show, fans can look forward to its first official appearance on a race track. March 14 will be the date: Frank Stippler and Markus Winkelhock will be sharing the cockpit of the new race car in the “Test- und Einstellfahrten” for the VLN Endurance Championship Nürburgring. Audi Sport customer racing will continue testing the GT3 race car that has been re-developed from scratch at this test.

Audi factory driver Nico Müller visited the Audi Forum Neckarsulm on Saturday. The DTM race driver watched the competition for the Baden-Wuerttemberg State Championship title ‘Formula One at School’ that was held there. Children and teenagers between the ages of 11 and 19 were pitted against each other in their self-built miniature race cars. Afterwards, Müller answered the questions of the young racers in a discussion round. Together with the non-profit limited liability company ‘Formula One at School’ Audi aims to inspire the interest of young people in technical professions. An autograph session with the Swiss concluded the day that was centered on racing.

This weekend, the 18 permanent entrants of the new Audi Sport TT Cup reeled off their first test kilometers. On the Circuit de Catalunya, the international talents covered approximately 7,700 kilometers in the Audi TT cup car on two days. During the smooth test on the 4.655-kilometer track north of Barcelona, all of the entrants gathered important findings for the final preparations in the coming weeks. Following another test in April, the Audi Sport TT Cup will start its inaugural season with two races at the Hockenheimring on the first weekend in May.

You’re looking back on an eventful week. First, the fitness camp of the 18 international talents of the Audi Sport TT Cup was on the agenda. As the project leader of the new Audi one-make cup, how did you experience the five days in the Allgäu?

In beautiful surroundings, it was fascinating to see how quickly the 18 young women and men from 13 nations became a team. With that, we achieved our first aim for the fitness camp. At the same time, it was important for us to show each single entrant their personal fitness level and to create optimum prerequisites for the first test at Barcelona in the process.

From the Allgäu, the 18 entrants immediately traveled via Munich on to Spain for the track tests. What’s your assessment?

For me and for everybody in the team it was an impressive experience when the engines of the Audi TT cup cars were started on Saturday morning and the entrants went out on track for the first time. I’m truly impressed by the performance of the car and our young drivers did an outstanding job too. The instructors, Markus Winkelhock and Marco Werner, expressly praised how quickly the 18 entrants familiarized themselves with the TT cup and how meticulously they worked out their individual set-ups. Based on the data analysis, we’re now entering the crucial weeks before the start of the season.

There are 55 days left until the inaugural race of the Audi Sport TT Cup. What’s still on your agenda before the season opens at the Hockenheimring?

We’re going to process the findings we gained from the test together with our colleagues from technical development. At the same time, we’re preparing for the second test of the season to be held in April. That’s when the drivers, in addition to covering more test kilometers, are going to practice specific things such as the starting procedure. And then of course we’re incredibly looking forward to the season opener on the big motorsport weekend at the Hockenheimring: the Audi Sport TT Cup together with the DTM, the World Rallycross Championship, Formula 3 and the Porsche Carrera Cup. The first weekend in May is going to pack a punch.