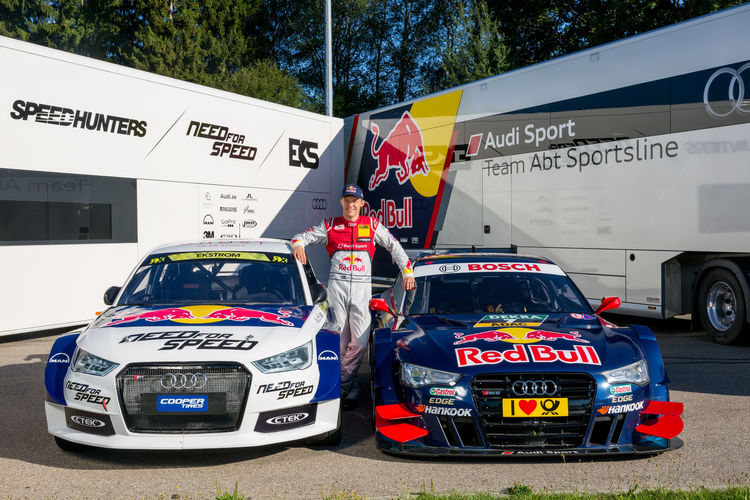 Motorsport fans can already look forward to the DTM season opener at the beginning of May, as the FIA Rallycross World Championship will be staging a round in a grand festival together with the touring cars.

The DTM season will start with an additional highlight in 2015. The season opener at Hockenheim (April 30 to May 3) will include a round of the FIA World Rallycross Championship (World RX) in which Mattias Ekström caused a sensation last year with his privately fielded Audi S1 EKS RX quattro – including a victory in the World RX round in Sweden. Hockenheim will also be seeing the inaugural event of the Audi Sport TT Cup. Therefore, Audi fans have three good reasons to travel to the DTM opener this time. Tickets are available online at www.audi-motorsport.com.

Timo Scheider on a mountain bike through South Africa

Audi driver Timo Scheider is going to pedal. From March 15 to 22, the two-time DTM Champion will be competing in the Cape Epic mountain bike stage race in South Africa with the factory team of the Cologne-based bike manufacturer Bulls. During the challenging eight-day event that starts at the campus of the University of Cape Town at the foot of the Table Mountain and finishes at the Meerendal wine estate, the 36-year-old will be pitted against the world’s best mountain bikers while having to master a cumulative elevation gain of some 16,000 meters.

Tom Kristensen has ended his active career as a race driver but the Dane, who continues to work for Audi as an ambassador and fitness consultant, is not suffering from boredom. The Le Mans record winner is working on a book about his career that is to be published on the occasion of the Le Mans 24 Hours. On Wednesday night, he was a surprise guest at the season opener of the RCCO slot car racing series that is celebrating its 25th anniversary this year. At the controls of an Audi R8, he won a “Danish duel” against his compatriot Anders Fjordbach, who in 2015 is competing in the Blancpain GT Series in an Audi R8 LMS ultra.

kfzteile24 MS Racing Team strengthens its lineup in the ADAC GT Masters. In the 2015 season, the squad from Waldshut-Tiengen in the Black Forest is fielding two Audi R8 LMS ultra cars. Up to now, Florian Stoll and Daniel Dobitsch have been competing together in a car, now each of the two race drivers has received a new team-mate. Stoll is contesting his fifth season in the supersport car category together with Marc Basseng, the 2012 winner of the Nürburgring 24 Hours. Dobitsch relies on Edward Sandström, the 2011 winner of the Dubai 24 Hours, as a new driving partner. The squad headed by team director is now racing with Audi for the third consecutive year.

Kelvin van der Linde is Motor Sportsman of the Year

Kelvin van der Linde has received a nice accolade for his performances in his native South Africa. The Audi driver, who is only 18 years old, won the 2014 ADAC GT Masters together with René Rast in the Audi R8 LMS ultra of Prosperia C. Abt Racing and has now been voted Motor Sportsman of the Year. He had previously won the award for the first time a year ago – then as the youngest-ever recipient of this award. The up-and-coming driver from Dainfern near Johannesburg is again competing with Audi in the ADAC GT Masters this year in order to defend his title.

You’re a DTM driver and owner of a private rallycross team. How do you view the joint appearance of DTM and World RX at Hockenheim?

It’s fantastic that this is coming off. The ITR and the IMG have been working on this for a long time behind the scenes. As a rallycross team boss, I’m delighted about the RX supercars being allowed to race in front of such a great crowd at the Hockenheim Motodrom. As a DTM driver, I’m delighted about the DTM opener becoming even more interesting as a whole and that additional fans will be traveling to Hockenheim. It’s a win-win situation for both – the DTM and the World RX. But the fans are the true winners.

What can the spectators look forward to on the first weekend in May?

To two of the best racing series that currently exist in the world, with fascinating race cars such as the Red Bull Audi RS 5 DTM and our Audi S1 EKS RX quattro – currently the only Audi in motorsport with conventional quattro drive. In addition, there’ll be the inaugural event of the new Audi Sport TT Cup. It’ll be a unique opportunity to experience all this on a single weekend not to be missed by any fan. I’m sure that the best tickets for the DTM festival will quickly be sold.

The DTM had a long winter break. Now the action will soon be starting again, with testing scheduled at Portimão (Portugal) for the beginning of March. Are you looking forward to sitting in the DTM cockpit again?

As long as there’s still snow on the ground here I’m still finding a bit difficult to think about a DTM race. But the upcoming track tests are sending a clear signal that we’ll be starting again soon. And that’s good. The new DTM season with its new format and the additional races promises plenty of suspense.

You’ll be competing in car #5 in the DTM this year – that’s the number you clinched your first title with in 2004. A good omen?

Yes, but not just because of that. I generally like the number ‘5’ because a lot of things in life have to do with ‘5.’

Will you be competing with ‘5’ in the Rallycross World Championship as well?

The plans for my private team, EKS, have not been completed yet. We’re still looking for partners to support us. Our aim is to compete in the full World Championship. But nothing’s locked in concrete yet. Obviously, I’m hoping for EKS to be able to race in the DTM festival at Hockenheim.