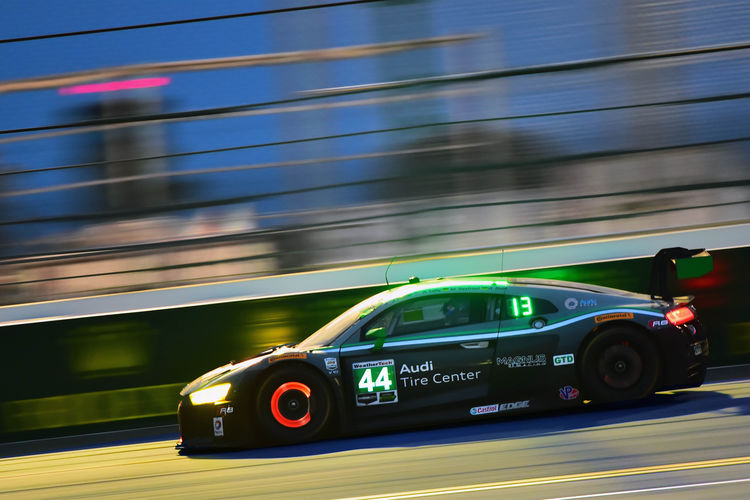 In a dramatic finale of the Daytona 24 Hours (USA), Magnus Racing secured victory in the GTD category. This was the second GT class victory for an Audi Sport customer racing team in the endurance race in Florida since 2013. Audi driver René Rast (D) and his teammates Andy Lally, John Potter and Marco Seefried (USA/USA/D) managed an impeccable race in the Audi R8 LMS. To save fuel, Rast as the race leader, had to let Italian Fabio Babini in the Lamborghini Huracán GT3 pass him nine minutes before the checkered flag fell. Just shortly before the end, the Audi driver overtook Babini again and went on to take class victory in the GTD category. After 2012, this marked the second GTD class victory for Rast in the iconic North American race with Magnus Racing. As a result, the new generation of the Audi R8 LMS customer race car, following its successes in the 24-hour race at the Nürburgring, the Sepang 12 Hours and the Dubai 24 Hours, clinched an amazing fourth triumph in a major endurance race. The Daytona 24 Hours opens the season of the IMSA WeatherTech SportsCar Championship, North America’s most important sports car championship. The next round will be held at the Sebring 12 Hours from March 16 to 19.

Leena Gade, Audi Sport engineer in the FIA World Endurance Championship (WEC), has received a prestigious award. On Saturday, the Briton was presented with the Lord Wakefield Trophy, a prize of the British Women Racing Drivers’ Club (BWRDC), honoring her commitment. Her consistently high achievements and dedication to the team and sport had convinced the jury. Leena Gade has led the driver squad of Marcel Fässler/André Lotterer/Benoît Tréluyer with Audi to victory in the Le Mans 24 Hours an amazing three times to date. With a track record of ten single victories, the driver trio is the most successful LMP1 combination in the FIA WEC. Leena Gade is equally committed to furthering womens’ interests in racing as a member of the FIA Commission for Women in Motorsport. At the awards ceremony held in the rooms of the Royal Automobile Club in London she was a guest together with Audi driver André Lotterer.

Audi driver Nico Müller treated himself to a foray into skiing this weekend. The Swiss DTM race driver took part in the qualifying rounds of the Audi quattro Ski Cup in Verbier in the canton of Wallis. There, amateur skiers, instructed by former world-class skier Fränzi Aufdenblatten and former Alpine Ski World Cup winner Didier Cuche, had the opportunity to optimize their technique and enjoy winter sport in a class of its own. With his win in his age group, the 23-year-old qualified for the world finals of the Audi quattro Ski Cup in St. Moritz from March 18–23.

Everyone obeyed his command: “Drivers, start your engines,” said nine-time Le Mans winner Tom Kristensen over the public address system to the drivers of the first stint in the Daytona 24 Hours. “It was a really special feeling to give the starting command for the race as Grand Marshal,” reported the former Audi driver who retired from his own career in 2014. “The newly developed ‘World Center of Racing’ is an impressive facility. And, as always, the race with its festival character was a tremendous spectacle.”

Audi welcomed the visitors of the European Motor Show in Brussels with genuine racing flair. Laurens Vanthoor, winner of the Sepang 12 Hours in December and the Dubai 24 Hours in January, signed posters for the Belgian racing fans in his home country and enjoyed being in touch with the fans. In just a week from now, he is aiming to win his third endurance race within the space of just three months – the Bathurst 12 Hour.

Another podium success for Tambay in Trophée Andros

On the penultimate stage of the Trophée Andros ice racing series at the French winter sports resort Super Besse, Audi driver Adrien Tambay in the Audi A1 quattro of the Belgian Audi Club Team WRT again clinched a podium place in the leading Elite Pro class. In the finale and in the points-classification, in which the results of the qualifying sessions and preliminary rounds are included as well, the 24-year-old Frenchman took third place. As a result, before the final seventh race weekend in Saint-Dié-des-Vosges, Tambay continues to be ranked in third place overall.

Audi race cars to build yourself

Toy manufacturer Lego has extended its “Speed Champions” series by two Audi race cars. The Audi R8 LMS ultra that was victorious in the 24-hour race at the Nürburgring in 2014 and the Audi R18 e-tron quattro from the FIA World Endurance Championship (WEC) will start selling in April, each model for 14.99 euros.

A word from Markus Winkelhock

A year ago, the Audi driver missed victory in the Bathurst 12 Hour by just two seconds. This year, the German again ranks among the favorites.

A year ago, exactly 2.453 seconds separated you from victory in the Bathurst 12 Hour. How have you been preparing for Australia’s longest race this year?

In winter, I rigorously pulled off my fitness program. And in the new year, I already practiced my driving skills when I contested the Dubai 24 Hours. The circuit at Bathurst is one of my favorite tracks. It’s important to locally familiarize yourself again with current details during race track reconnaissance. I’m relaxed about traveling to Australia because we’re superbly prepared as a whole team.

You’re going to race with Phoenix Racing and your teammates Alex Davison from Australia and Laurens Vanthoor from Belgium. What chances are you expecting to have?

We’re determined to battle for victory and I believe we’ve got the chance to be in contention. Phoenix Racing won the race in 2012. Alex Davison knows the track and is going to give his all in his home round. With Laurens Vanthoor, I was on podium in Australia a year ago. The new generation of the Audi R8 LMS is optimally suited for this challenging track. But we’re going to meet with strong rivals as well. Last year, seven marques were in the top seven places. This year, there will be 24 GT3 race cars from seven manufacturers on the grid. That makes the race in the Southern Hemisphere similarly valuable as many major iconic races in the Northern Hemisphere.

What makes the race at Bathurst so unique?

The race is simply unmatched due to a large number of factors. The track configuration across Mount Panorama is breathtaking. The concrete walls directly lining the circuit don’t permit a single mistake, similar to a city street circuit between guard rails or walls. And there’s no other driver briefing in the world that warns you to beware of kangaroos. The weather in the Australian summer can be very hot, but we’ve seen wet races before as well. In 2010, we even had a storm that was so heavy that a tree fell and the race had to be interrupted. A total of 40 cars on a track length of just 6.213 kilometers require twelve hours of full concentration when overtaking or lapping other cars. I’m already looking forward to this challenge.