Links
{{ activeItem() }}
Twitter
08/08/20
At #Audi, we live #sustainability. We want to help achieve the Paris #climate targets by reducing our #CO2 footprin… https://t.co/6S7hEsYksK
08/06/20
#Hardware meets #software: The Electronic Chassis #Platform interlinks mechanical chassis components. That way… https://t.co/Ej9YMVqjvG
08/05/20
We are committed to a #sustainable #future and are reducing our #EcologicalFootprint with our Mission:Zero initiati… https://t.co/0JOJeOVqoU
08/05/20
Today's the day: @LucasdiGrassi and @ReneRastRacing are contesting the first #race day of the six-pack #FormulaE sh… https://t.co/cMNJBPyWKP
Audi on Twitter
08/08/20
MEDIAINFO: Half-time in Berlin: Audi driver di Grassi third in the championship &gt;&gt; https://t.co/j9RKhphtCq… https://t.co/3SmCtjRhD3
08/08/20
.@LucasdiGrassi remains in the top 3 of the drivers’ standings after today’s race in Berlin. Back on track with rou… https://t.co/jumZJh5aVY
08/08/20
We moved up one position in the teams’ standings with three races to go in season 6. &gt;&gt; https://t.co/ktQ0jleme7… https://t.co/vIFnkVjXAS
08/08/20
Fanboost is open for round 9 of @FIAFormulaE in Berlin. Vote for @LucasdiGrassi and @ReneRastRacing: &gt;&gt;… https://t.co/TItLRn5TNp
Audi Sport on Twitter
{{ activeItem() }}
Facebook
08/03/20
What a start to the DTM season it was for Nico Mueller! Race victory and he is currently leading the drivers’ standings. See how he experienced the weekend in his latest #DriversDiary. >> audi.com/DTM #PerformanceIsAnAttitude #ThanksToDTM
08/03/20
Fourth victory for the Audi R8 LMS in just two weeks, adding to podiums and victories for the Audi R8 LMS GT4 and Audi RS 3 LMS this past weekend. 🇩🇪 🇮🇹 🇺🇸 🇫🇷 >> audi.com/GT3 >> audi.com/GT4 >> audi.com/TCR #PerformanceIsAnAttitude
08/02/20
Another podium lockout for us today! Check out how the second race at Circuit de Spa-Francorchamps has unfolded. >> audi.com/DTM #PerformanceIsAnAttitude #ThanksToDTM
08/02/20
Leading the pack. >> audi.com/DTM #PerformanceIsAnAttitude #ThanksToDTM
Audi Sport on Facebook 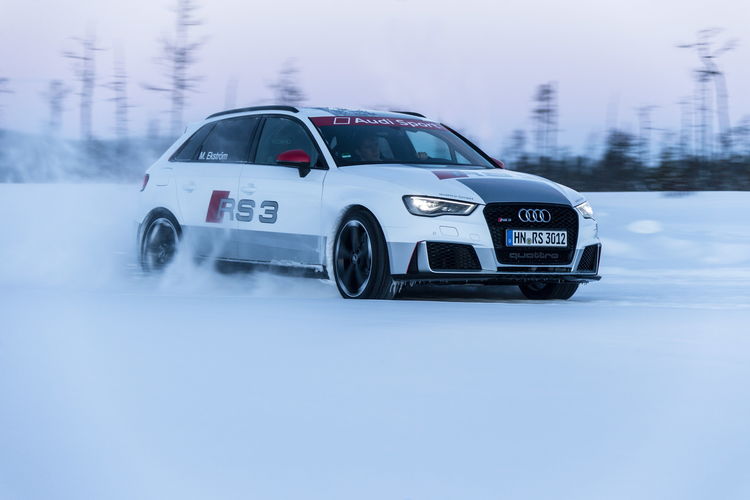 Audi factory driver on a mission off the race tracks: DTM driver Mattias Ekström gave selected European journalists an initial impression of the performance capabilities of the new Audi RS 3 Sportback* on snow and ice in Finland. WEC driver André Lotterer visited the Motor Show in Brussels together with GT driver Laurens Vanthoor.

On snow and ice at the proving grounds in Ivalo, Finland, selected European journalists got an initial impression of the performance capabilities of the new Audi RS 3 Sportback that is equipped with the most powerful five-cylinder production engine in RS history delivering 270 kW (367 hp) and torque of 465 Nm. A special highlight: rides at racing speed alongside DTM star Mattias Ekström in an RS 3 fitted with a roll cage and racing bucket seats. “A really cool car,” the Swede enthused about the vehicle following his return from Finland.

Lotterer and Vanthoor at Motor Show in Brussels

Audi factory driver André Lotterer and GT Sport driver Laurens Vanthoor visited the 93rd Motor Show in Brussels. Both signed plenty of autographs and subsequently attended the opening gala of the Dream Car exhibition. One of the cars showcased at the exhibition was the Audi R18 e-tron quattro in which Lotterer, together with Marcel Fässler and Benoît Tréluyer, celebrated his third victory in the 24-hour race at Le Mans last year.

With three Audi R8 LMS ultra cars, title defender C. Abt Racing will be competing in the 2015 ADAC GT Masters. Regular driver Nicki Thiim will be sharing the cockpit with 18-year-old new signing Jordan Lee Pepper from South Africa, the last Champion in the VW Scirocco R-Cup, beginning in the season opener at Oschersleben (April 24–26). Title defender Kelvin van der Linde will be contesting the 16 races of the season together with 19-year-old Stefan Wackerbauer, who made his debut in the ADAC GT Masters last year. The third Audi R8 LMS ultra will be driven by the 27-year-old seasoned campaigner Christer Jöns. His team partner has not been determined yet.

Audi Sport is now present on Instagram as well. At instagram.com/audi__sport , fans of the brand with the four rings will find the most fascinating pictures from Audi’s extensive motorsport program. The Instagram profile complements Audi Sport’s social media profile which includes the Facebook profile with more than 6.4 million fans and the Twitter account with over 30,000 followers.

A word from ... Timo Scheider

The new DTM season will start in two months from now. How have you been using the winter break?

I’m a person that constantly needs new challenges. That’s why I’ve set myself a particularly ambitious goal for the time until the DTM season starts. From March 15 to 22, I’ll be competing with the factory-backed team of the bike manufacturer Bulls in the Cape Epic in South Africa, which – as many say – is the world’s toughest mountain bike race. I’m facing 740 grueling kilometers and 16,000 meters of cumulative elevation gain that I’ve got to complete in seven days. I’m incredibly excited but also a little nervous. And as I’d obviously like to finish the race my training program is particularly focused on endurance at the moment. And losing a bit of weight would be good too. That’s why my diet these days is low-carb, with no sweets – that’s pretty difficult.

And how hard will it be for you to adjust to the new DTM format? In the future, there’ll be two races per weekend.

I see that in a very positive light. After all, I was one of the people who strongly supported this change. I’m a racer and would like to drive as much as possible. In addition, we can offer even more action to the DTM fans this way and have the chance to score points twice on a single weekend. From the perspective of the whole season, these 18 races will make it easier for us to compensate for a retirement by achieving a good result. This will make the championship even more thrilling. The newly formed Audi Sport TT Cup is adding further value to the season.

You’re also personally committed to promoting young drivers and will be entering the new ADAC Formula 4, the successor series of the ADAC Formel Masters, with your own team in 2015. What’s the current state of this project?

My two drivers, Leon Wippersteg and Mauro Auricchio, have signed their contracts, the first car has been prepared and we’re going to pick up the second one in Italy in the next few days – and then I’ll be looking forward to the track tests.

It’s going to be a very busy season. How does your partner, Jessica, feel about this?

I’m very happy about the development of my personal life. But even though it won’t be easy, I’m sure that Jessica and I’ll be able to manage all these things. We’re still young and dynamic – and have recently gotten engaged.