Skip to content
Please participate in our survey and help us improve the Audi MediaCenter. Thank you!
Go to survey
01/25/15
Ingolstadt
Motorsport 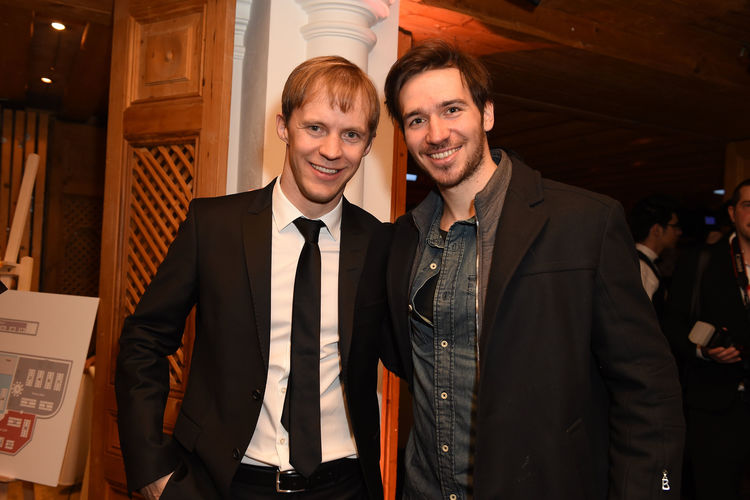 Snow and hot duels in GT racing: Audi drivers from the DTM and the WEC were guests at the traditional Audi Night as part of the Hahnenkamm race in Kitzbühel. Meanwhile two Audi customer teams were starting the new GT season in the 24 Hours of Daytona in spring-like Florida.

Audi factory drivers in the limelight

The two-time DTM Champions Mattias Ekström and Timo Scheider, as well as the Le Mans winners Marcel Fässler, André Lotterer and Benoît Tréluyer, were guests at the traditional Audi Night at the hotel ‘Zur Tenne’ in Kitzbühel on Friday night. At the social opening event of the 75th Hahnenkamm Weekend, they met with Luca de Meo, Member of Audi’s Management Board for Marketing, among others. Before the British-Lebanese pop star Mika enthralled the audience, Ekström and skiing star Felix Neureuther recalled the events of the new Audi quattro challenge in front of an audience of some 370 guests. The day before, the slalom star had taken the wheel of Ekström’s Audi S1 EKS RX. With instructions provided by the Swede who had won his home round in the FIA Rallycross World Championship in the S1 EKS RX last year, Neureuther had enthusiastically drifted across icy terrain and gotten a first-hand impression of the superiority of quattro permanent all-wheel drive.

The two Audi R8 LMS cars of Paul Miller Racing and Flying Lizard Motorsports finished the 24 Hours of Daytona (USA) in the top ten of the GT Daytona class. The Germans René Rast and Christopher Haase, together with Bryce Miller and Dion von Moltke in the R8 LMS of Paul Miller Racing, were initially among the front runners in the field. In the eleventh hour of the race, René Rast took the class lead for the first time. However, spins and collisions in the second half of the race deprived the team of its chance for victory and meant fifth place. Flying Lizard Motorsports with Markus Winkelhock, Tomonobu Fujii, Satoshi Hoshino and Robert Thorne suffered an early setback when Hoshino spun in the first hour of the race and lost 32 laps in the process. Thanks to making a recovery the team still managed to finish the GT Daytona class in tenth place.

Audi Ambassador Allan McNish waved the green flag signalling the start of the Rolex 24 at Daytona. McNish, the 2013 FIA World Endurance Champion with Audi Sport Team Joest and a three-time Daytona 24 Hour runner-up, got the 53rd running of this year's race featuring 53-cars underway around the 3.56-mile Daytona International Speedway in Florida.

After winning the 12 hours of Bathurst (Australia) in 2011 and 2012, Phoenix Racing fights for a third victory in the race on 8 February with a slightly changed driver line-up. Because Audi factory driver René Rast (D) must pursue his new sportscar commitments, Laurens Vanthoor (B) switches within the team to drive alongside Markus Winkelhock (D) and Marco Mapelli (I) in the black Audi R8 LMS ultra with start number ‘15’. Joining the familiar yellow kangaroo traffic sign emblazoned on the bodywork is another grey marsupial on the bonnet and a koala on the rear. The free slot in the number ‘16’ green-grey sister car of Felix Baumgartner (A) and Christopher Haase is taken by newcomer Stéphane Ortelli (MC). The trio contests the endurance classic in a particularly exotically designed R8 LMS ultra sporting a rainforest design featuring a crocodile and colorful birds as well as a spider in its net.

Christopher Mies to compete in ‘Down Under’

Audi driver Christopher Mies will be competing in the 2015 Australian GT Championship that starts at Adelaide on February 26. The German will be driving one of the two Audi R8 LMS ultra cars of Team Jamec PEM Racing at all six events. “I’m a big fan of Australia and very much look forward to this challenge. My aim is to clinch the title,” says Mies. Additionally, alongside Mark Eddy and Marc Cini, he will be competing for the fourth consecutive time in the Bathurst 12 Hour (February 8) which he won in 2011 and 2012. For the sister car, the Italian Alessandro Latif and the Australian Warren Luff have been nominated to date.

Audi driver Miguel Molina is fast on a frozen track as well. On the second race weekend of the GSeries BPA Ice Racing Championship, the 25-year-old Spaniard competed as a guest entrant against DTM rival Daniel Juncadella on the Grandvalira Circuit in Andorra. Across three rounds, Molina demonstrated his skills on icy ground and, after numerous overtaking maneuvers, won the slipping-and-sliding race 2-1.

Audi driver Timo Scheider has won the ’24h Race of Cologne’ with All Stars Team Urbat. The nine-member squad that included DTM record champion Bernd Schneider had started the 24-hour kart race from the pole position and, after 3,256 laps, prevailed with an advantage of just 3.7 seconds in a heartbeat finale. Scheider and his team-mates celebrated overall victory in front of a record turnout of 6,200 spectators. “It was tremendous fun,” said the two-time DTM champion immediately after crossing the finish line. “The performance level in Cologne is incredibly high. We had to give our all up to the very end.”

Even after having retired from active motorsport Tom Kristensen keeps reaping awards. The French sports daily L'Équipe honored the nine-time Le Mans winner by naming him ‘Champion of Champions’ for 2014 and presented the Dane with a golden trophy to crown his career. The editors of L'Équipe have regularly been selecting their athletes of the year since 1946.

Audi factory driver André Lotterer was recognized at the awards ceremony of the Belgian automobile club RACB for his third victory in the Le Mans 24 Hours. The prize plus a cartoon showing him jubilantly crossing the finish line in the Audi R18 e-tron quattro was presented to the German by motorsport legend Jacky Ickx.

Could you have imagined a year ago that you’d be making your debut in the Audi R18 e-tron quattro in 2015?

I’d been dreaming about such a cockpit and battling to get it for a long time but only a very small number of race drivers in the world are given this opportunity. Being one of those to have achieved this is a great honor and pleasure for me, particularly as I don’t have a lot of experience yet in sports prototypes and only drove an LMP2 in 2014 on making my debut at Le Mans. However, without this learning curve it would have been impossible to climb into an LMP1. That’s really a major step because the Audi R18 e-tron quattro is arguably the most complex and best race car in existence – a dream car!

And what was the response to your promotion?

I received a lot of messages and calls. The response was positive across the board. Many people told me that, following my successes, I deserve the place in Audi Sport Team Joest. That was nice to hear.

You’ll be complementing the WEC driver squad in the Spa 6 Hours and the Le Mans 24 Hours in the third Audi R18 e-tron quattro. How are the preparations going?

I drove the Audi R18 e-tron quattro at the end of 2014. That’s been my only stint in the LMP1 so far but there’s a lot more planned before my first start as an Audi factory driver in the Spa 6 Hours in May. My new team is supporting me superbly and I’m excited about the coming season – especially the Le Mans 24 Hours. I’m not setting myself any unrealistically high goals. Obviously, a place on the podium would be tremendous and should be our aim.

You were racing as a GT driver for a whole decade. Is this chapter in your career definitely over now?

I’m going to stay in GT racing. We’re still going to define what that will look like in detail.