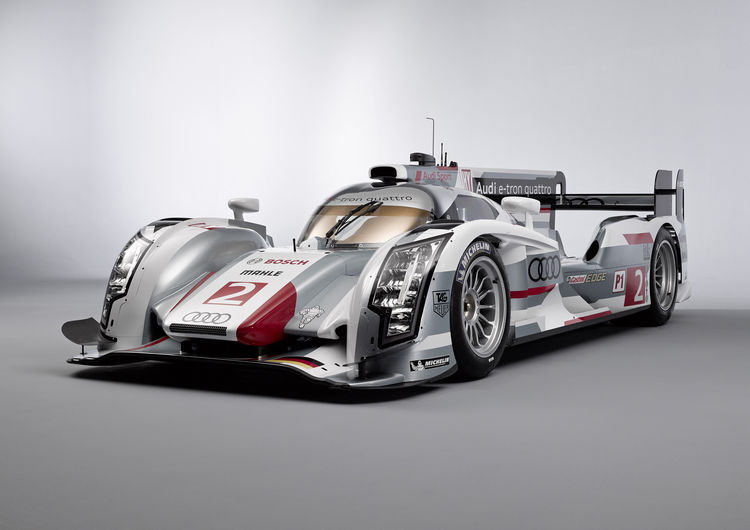 It is a debut and a farewell at the same time: the Audi R18 e-tron quattro contests the 12-hour race at Sebring (Florida) in the USA for the first time on March 16 and, in doing so, makes the legendary racetrack ‘home of quattro’. At the same time, it is provisionally the LMP1 sports car’s final appearance in the North American endurance classic.

The race at Sebring is staged under special circumstances for Audi: the merger of the two U.S. championships, the American Le Mans Series (ALMS) and GRAND-AM, sees new regulations coming into force from 2014. In the future, no Le Mans Prototypes (LMP) of the top category can compete in this race. As a result, events come full circle for Audi in Florida: in 1999, the brand’s first LMP sports car celebrated its premiere at Sebring – now two LMP1 sports cars with the four rings provisionally contest a race here for the final time. After Audi customer racing’s winning start to the season with the one-two finish for the Audi R8 GRAND-AM in the 24-hour race at Daytona, Audi now targets another victory in the USA – despite difficult conditions as the race cars from the American Le Mans Series enjoy several advantages with regard to weight and engine power.

In the 13 outings to date in the sports car classic at Sebring, Audi has claimed 22 podium finishes, including ten overall victories. Three Audi drivers, Michele Alboreto/Dindo Capello/Stefan Johansson, mounted the podium at the premiere on March 20, 1999. The Dane Tom Kristensen is the race’s most successful driver with six wins. Marco Werner holds the lap record at Sebring, the trio Dindo Capello/Tom Kristensen/Allan McNish the distance record.

The Sebring raceverytrack is located on a former military airfield, which Audi transforms into the ‘home of quattro’ this year and therefore picks up the threads of a successful chapter of motorsport history: for the first time since 1989, when drivers like Hans-Joachim Stuck and Walter Röhrl raced from victory to victory with the Audi 90 quattro in the IMSA-GTO series, Audi Sport contests a factory event in the USA with a racecar equipped with four-wheel drive. The Audi R18 e-tron quattro is the first hybrid sports car to win the 24 Hours of Le Mans. Its front wheels are powered electrically and thus make the R18 a special type of quattro.

In addition to the active factory drivers, the former Audi drivers and Sebring winners Frank Biela, Dindo Capello, Emanuele Pirro and Marco Werner are also present and will be signing autographs, posing for photos and giving interviews for the fans. In this way, Audi thanks the passionate sports car fans in the USA for their long-standing loyalty to the brand. “Without a shadow of a doubt it’ll be an emotional race weekend for us because Sebring and its fantastic fans enjoy a very special status in both our motorsport and LMP history,” says Head of Audi Motorsport Dr. Wolfgang Ullrich.”

In contrast to last year, the American Le Mans Series season opener is not a part of the FIA World Endurance Championship. The 2013 WEC season starts a month later on April 14 with the 6-hour race at Silverstone, Great Britain.

Dr. Wolfgang Ullrich, Head of Audi Motorsport: “Sebring was always a fixed date in our motorsport calendar since the beginning of our sports car program in 1999. And justifiably so, as Sebring is a particularly hard racetrack. Hard and demanding for driver and machine – whoever survives this 12-hour race without problems is usually well equipped for every other challenge. The race will once again be the perfect dress rehearsal for the forthcoming WEC season and the 24-hour race at Le Mans.”

Ralf Jüttner (Technical Director Audi Sport Team Joest): “We travel to Sebring a little downhearted. It’s a real shame that LMP1 sports cars will not be allowed to start anymore in this legendary race. The race this year means some additional technical effort for us as we send two cars of different generations to the grid. It’s good, however, that we can test the further developed Audi R18 e-tron quattro in race conditions here. It’s always proved particularly beneficial in terms of preparing for the 24-hour race at Le Mans. We are happy to accept the extra effort for this.”

Facts and quotes from the Audi drivers

Marcel Fässler (36/CH), Audi R18 e-tron quattro #1 (Audi Sport Team Joest)
- First Swiss to win a World Championship title in car racing
- Competes for the third time at Sebring in a Le Mans Prototype
“Sebring is a very special race thanks to its tradition, atmosphere and the track’s unique character. I’ve raced here twice before, but haven’t been able to win so far. I want to change that this time around, especially as it’s probably the last chance we’ll get for a long time to fight for overall victory here with Audi.”

Oliver Jarvis (29/GB), Audi R18 e-tron quattro #1 (Audi Sport Team Joest)
- First race together with Le Mans winners Fässler and Tréluyer
- Competes for the second time in a race in America
- Won the GT class in an Audi R8 GRAND-AM at Daytona on his U.S. debut in January
“I was really happy when I got the call from Audi saying that I could race at Sebring. The race is one of the world’s greatest endurance classics. I’m particularly proud of being in a car with the two-time Le Mans winners Marcel Fässler and Benoît Tréluyer. I’m certain that I can learn a lot from them and hope that we will be successful together. I’m already convinced that this race will be a highlight in my career.”

Benoît Tréluyer (36/F), Audi R18 e-tron quattro #1 (Audi Sport Team Joest)
- Starts his fourth season with Audi
- Starts for the second time at Sebring after his debut last year
“Sebring is a special race – for several reasons: firstly, the many extremely enthusiastic fans make the atmosphere something very special. Secondly, it is difficult to find a perfect set-up for the car because the track is very bumpy and the surface changes constantly between concrete and different types of tarmac. The race is a big challenge for everybody. I’m looking forward to mastering it.”

Lucas di Grassi (28/BR), Audi R18 e-tron quattro #2 (Audi Sport Team Joest)
- First race at Sebring
- Second race for Audi (after WEC Brazil 2012)
“I’ve never been to Sebring, but I’ve heard from my team-mates that it is a fabulous race and the track is extremely demanding. This is why I’m excited, but also happy about having the same team-mates for my second outing as an Audi factory driver as I did for my debut in 2012 at Interlagos. Tom (Kristensen) and Allan (McNish) helped me a lot at that time and they’ll also support me this time with many valuable tips.”

Tom Kristensen (45/DK), Audi R18 e-tron quattro #2 (Audi Sport Team Joest)
- Record winner at Sebring with six overall victories to his name
- Starts his 14th season as Audi factory driver in Florida
“Nothing has changed at Sebring since the days of Juan Manuel Fangio and Stirling Moss. So, the challenge is the same as every year: to get through the traffic well, to hustle the car safely and quickly around the very bumpy track – and to win. The whole thing is obviously even more special as this could possibly be the final race in an Audi prototype at Sebring.”

Allan McNish (43/GB), Audi R18 e-tron quattro #2 (Audi Sport Team Joest)
- Shares a cockpit with Tom Kristensen at Audi since 2006
- Has mounted the Sebring podium seven times in his career
“It was really great news when I heard that Audi would also race at Sebring in 2013. After all, this race is an important part of Audi’s sports car history. That there is also a hint of goodbye hanging over the event gives the whole thing a special touch. Even more fans than usual will certainly come to the track to personally experience the end of an era. Just like the entire Audi team, I will also do my utmost to bid Sebring farewell with a win. This would make me very proud.”

The Audi drivers at Sebring

Marcel Fässler about the Sebring circuit

“Compared to a modern European racetrack, Sebring is a relic from the 1960s. But the track gains enormously in character as a result: the concrete slabs of the old airfield are aligned in rows one after the next and have very noticeable gaps between them and even big steps. You have to be brave at the first and last corners. The first turn has a blind entry – the track width narrows down from about 20 to only eight meters here. You have to be careful of the big bump on the corner exit. It can be very tricky at night. In general the circuit is not very well illuminated, but luckily we have the full LED headlights on the Audi. This helps us a lot and I wouldn’t like to be without them.”