{{ activeItem() }}
Twitter
03/05/21
Turning the unimaginable into reality. A vision we share with our partners @FCBayern. Discover more at… https://t.co/wWAvTCKWpe
03/05/21
Audi e-tron sound design up close: To provide the perfect acoustics, an exclusive and unique sound was designed out… https://t.co/IiFxnACeJ7
03/05/21
At #Audi we believe that imagining the unimaginable can create a new reality. Together with our partners @FCBayern,… https://t.co/atLvE25mA6
03/04/21
Setting the tone for the perfect Audi #sound: Put your hearing to the test. Which #Audi model could that be? https://t.co/3ZO3AqmN45
Audi on Twitter
YouTube
02/26/21 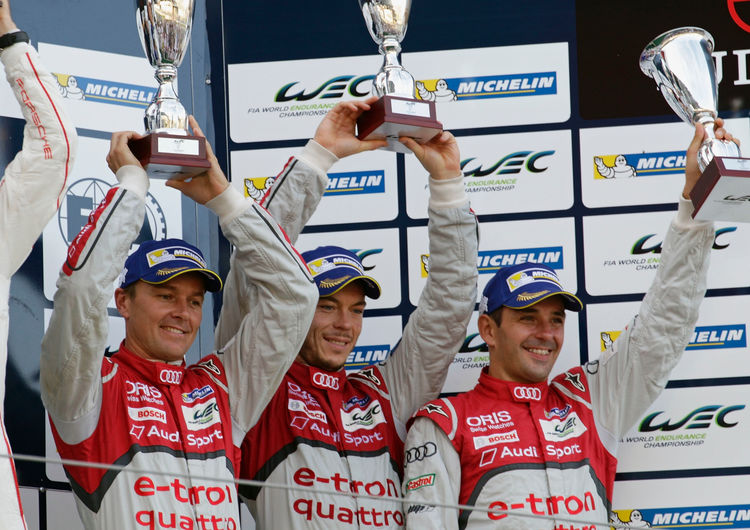 Advantage maintained: The Audi drivers Marcel Fässler (CH), André Lotterer (D) and Benoît Tréluyer (F) remain the leaders of the standings halfway through the FIA World Endurance Championship (WEC) season. The 2012 World Champions achieved third place in the 6-hour race at the Nürburgring in front of a large crowd, defending their 17-point advantage in the drivers’ classification.

Audi remains in front: After the fourth of eight rounds, Fässler/Lotterer/Tréluyer continue to lead the standings – as they have ever since the season opener in April. In the German debut of the FIA World Endurance Championship (WEC), Audi had to admit defeat for the first time in a 6-hour race this year. The Audi driver trio in car number ‘7’ had started from position three, maintained second place for a long time but in the end finished behind two Porsche sports prototypes. “In the hot temperatures of nearly 30 degrees Celsius we weren’t as competitive this time as we were at the beginning of the season,” André Lotterer said, summing up the race. His team-mate Marcel Fässler added: “The important thing was to maintain an advantage in the standings.” Following the fourth podium result in four races, Benoît Tréluyer said: “Even though we weren’t battling for victory for a change, we managed to clinch a podium and to score important points in the process.”

In the sister car, number ‘8,’ Lucas di Grassi (BR), Loïc Duval (F) and Oliver Jarvis (GB) showed a superb performance. In the last hour of the race, Di Grassi was battling for second place with Porsche driver Marc Lieb for a long time, but ultimately saw the checkered flag in position four.

“We’d have liked to have battled for victory in our home race in front of a large crowd as we did at the beginning of the season,” said Head of Audi Motorsport Dr. Wolfgang Ullrich. “But we had to accept that Porsche were stronger today. In the standings, our drivers have maintained a remarkable advantage. This means we can expect a thrilling second half of the season.”

Chris Reinke, Head of LMP at Audi Sport, added: “In Audi’s home round, we competed in front of an impressive crowd of fans. It was great to see how popular the LMP sports cars are in Germany. That was perfect advertising for the FIA WEC. For the remaining races, we’re going to leave no stone unturned to continue to optimally support our drivers in the battle for the WEC title. The title is far from having been decided.”

In three weeks from now, round five of the season is coming up. In the U.S. state of Texas, the FIA WEC will be held for the third time, on September 19 – Audi won both of the two previous rounds at Austin.