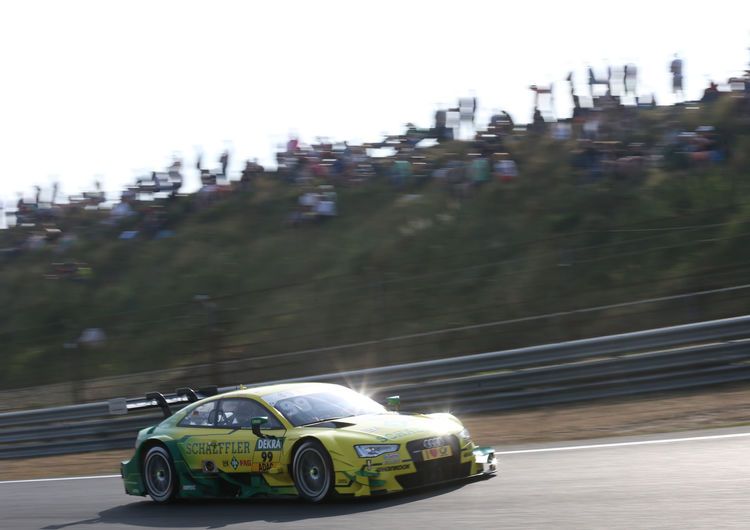 Despite a disappointing result in the first of the two DTM races at Zandvoort (the Netherlands), Audi has kept the one-two lead of the drivers’ classification and extended its advantage in the manufacturers’ classification. Jamie Green and Mattias Ekström continue to rank in positions one and two.

Mike Rockenfeller in the Schaeffler Audi RS 5 DTM of Audi Sport Team Phoenix was the best of the drivers who had to compete with high performance weights at Zandvoort. Trailing seven clearly lighter BMW cars, the Audi driver took eighth place. In the next position, Nico Müller in the Financial Services Audi RS 5 DTM of Audi Sport Team Rosberg scored points as well. As a result, Audi extended its advantage in the manufacturers’ standings over Mercedes-Benz by five points (289-236).

In the group of the front runners in the overall classification, only Pascal Wehrlein scored a point. Leader of the standings Jamie Green in the Hoffmann Group Audi RS 5 DTM, as the best Audi driver, started from the third row and defended his sixth place in the race for a long time against Bruno Spengler, before an off-track excursion on lap 18 forced him to retire. The runner-up in the standings, Mattias Ekström, in the Red Bull Audi RS 5 DTM improved from grid position 19 to 13th place, but remained without points as well.

“Obviously, this is not a result to our liking at all,” said Dieter Gass, Head of DTM at Audi Sport. “We already saw in qualifying that our calculations were right and that due to the performance weights we’re losing about half a second per lap to the lighter cars. But saying that it was just the weight would be too easy. Our drivers weren’t happy with the handling of their cars in the race either. We’re going to analyze this and try to do better tomorrow. However, after what we experienced today, we can expect it to be another stony road.”

“More wasn’t possible from my grid position. I had a good start and immediately recovered a few positions,” said Mike Rockenfeller. “Afterwards, I wasn’t able to overtake any more cars. It’s a shame that the weight plays such a major part.”

For the second race on Sunday, cooler conditions with a chance of rain have been forecast. ARD will be airing live coverage from Zandvoort starting at approx. 13.55 (CEST). Additional live streaming is available on www.dtm.com/live, www.sportschau.de and www.bild.de.