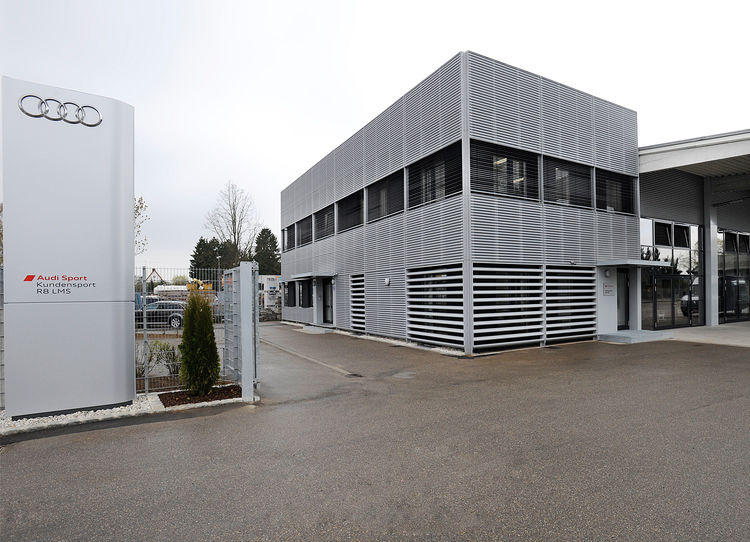 The new customer sport center on Roderstraße in Ingolstadt has officially opened its doors in time for the highlight of the GT3 sports car season – the 24-hour race at the Nürburgring on May 15/16.

The new customer sport center on Roderstraße in Ingolstadt has officially opened its doors in time for the highlight of the GT3 sports car season - the 24-hour race at the Nürburgring on May 15/16.

“The customer sport program with the R8 LMS is Audi Sport’s third pillar in addition to the DTM and Le Mans, and is becoming increasingly important,” explains Audi’s Head of Technical Development (TE) Michael Dick, who officially opened the center together with Head of Audi Motorsport Dr. Wolfgang Ullrich. “By creating the customer sport center, we have found a way to do justice to the ever-increasing number of R8 LMS customers,” Dick adds.

Last year, it was predominantly teams affiliated with Audi that competed in the fascinating GT3 sports car. Now for the first time in the 2010 season, the cars are entirely in the hands of private teams, with Audi Sport giving them technical support.

“There is huge demand for the R8 LMS,” says Head of Audi Motorsport Dr. Wolfgang Ullrich. “We were unable to manufacture enough vehicles for 2010 to satisfy potential sales, so we initially focused on the European market. The new customer sport center clearly shows how important customer sport is to Audi.”

Audi Sport will deliver around 20 R8 LMS vehicles to customers in 2010. Ten have already been in use since last year and have since been upgraded to the very latest technical standards with an update kit. The new customer sport center serves as an efficient and modern service point that enables Audi Sport to offer owners of an R8 LMS perfect service.

While the Audi R8 production vehicle is manufactured in Neckarsulm and the R8 LMS is produced in Heilbronn-Biberach, the new 950 square meter building located near the Audi Sport headquarters in Ingolstadt houses not only an office wing, but also an exhibition hall and an extensive parts warehouse.

The customer sport center represents one of Audi’s major strengths, namely its global logistics. The brand’s racing customers benefit in that the majority of parts deliveries undergo the same processes and follow the same paths as the logistics for the global sales of Audi’s series products. The logistics structures have gradually evolved over the years and will now also be used to market parts for the R8 LMS.

“These Group-wide logistics mean we can get supplies to all our global bases smoothly,” says R8 LMS Project Leader Romolo Liebchen. “As a result, as well as attending to the needs of teams based in Europe, we will now also be able to look after our customers further afield. Further down the line, we will also establish cooperations with partners such as our importers in order to supply their relevant markets with what they need without delay.”

Most of the Audi privateer teams have already completed their first races with the R8 LMS in 2010, and three of them are now gearing up for the highlight of the season - the 24-hour race at the Nürburgring on May 15/16. Between them, the teams ABT Sportsline, Black Falcon and Phoenix Racing will be racing seven Audi R8 LMS, some of which will be manned by big names from the world of motorsport.

“Audi Sport delivers the technical support these vehicles need, just like it does during all other GT3 races around Europe,” says Head of Audi Motorsport Dr. Wolfgang Ullrich. “It is up to the various teams, all of which are also competing against each other, to decide how to use the vehicles and who will drive them. We can’t wait to see how our customers do in this race. It’s an absolute highlight in the calendar and it really pulls in the crowds.”

Last year, ABT Sportsline raced with the R8 LMS at the Nürburgring 24-hour race for the first time, winning straight off in the GT3 category and coming second in the overall classification. The Allgäu-based team is once again lining up with two R8 LMS in 2010 and the vehicle drivers will include the Audi “factory” drivers Mattias Ekström, Oliver Jarvis, Lucas Luhr, and Timo Scheider.

The Phoenix Racing team, which is based in the Eifel, is likewise gearing up for success with two Audi “factory” drivers and will be racing three R8 LMS in total. Mike Rockenfeller and Marcel Fässler will be racing for the team once again alongside two of the most successful Audi “factory” drivers of years gone by, Frank Biela and Hans-Joachim Stuck.

Johannes Stuck and Kenneth Heyer are the biggest names to be racing for the new Audi privateer team Black Falcon, which instantly made quite an impression when it entered two R8 LMS in the VLN Endurance Championship for the first time. Together with Luca Ludwig, who drives for Phoenix Racing, there will therefore be the sons of three highly popular former greats from the fields of German touring car and sports car racing - Hans Heyer, Klaus Ludwig, and Hans-Joachim Stuck - battling it out behind the wheel of an Audi R8 LMS on the legendary Nürburgring-Nordschleife circuit.