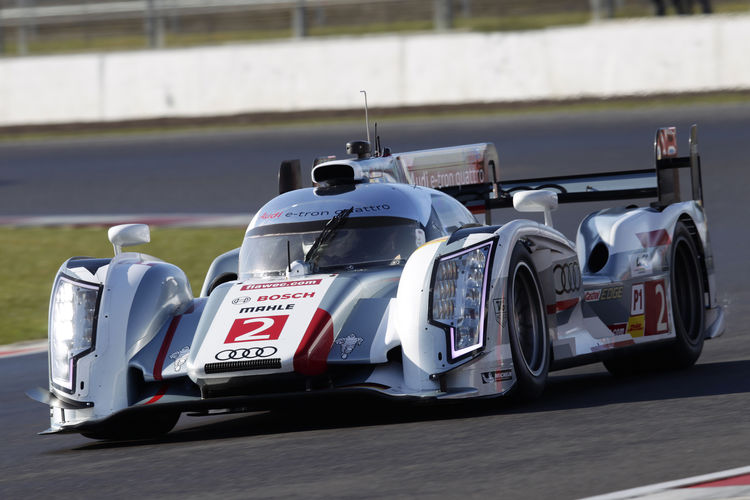 At the opening round of the FIA World Endurance Championship (WEC) at Silverstone, Audi experienced a turbulent qualifying session in which changeable weather made a precise tire choice impossible. In the end, the session resulted in grid positions three and five for Audi.
Download PDF (171 KB)
Facebook
Twitter
LinkedIn
WhatsApp

At the opening round of the FIA World Endurance Championship (WEC) at Silverstone, Audi experienced a turbulent qualifying session in which changeable weather made a precise tire choice impossible. In the end, the session resulted in grid positions three and five for Audi.

Premiere in the WEC: For the first time, two drivers were nominated for qualifying, with each of them having to complete two timed laps. With only 20 minutes duration and a rain shower setting in, Audi did not manage perfect timing. Both Audi R18 e-tron quattro cars started the qualifying session on untreaded intermediate tires, but returned to the pits due to a shower. When they went out again to chase for times on rain tires, the rain stopped and the track quickly dried off.

Loïc Duval on treaded tires achieved the fourth-best time twice. He turned over his number 2 Audi to Tom Kristensen, who went out on intermediate tires. The average time, which determines the grid position, achieved by the duo resulted in grid position three with a 3.2-second gap.

The sister car’s situation was less fortunate. Benoît Tréluyer in car number 1 complained about a malfunction of the traction control system that cost him a significant amount of time compared to car number 2. His team-mate André Lotterer achieved the third-fastest time on his first outing and ultimately set the best time of his group. On average, these performances resulted in grid position five. Despite the adverse conditions Audi is looking toward the race with optimism, as the balance of both Audi R18 e-tron quattro cars gives rise to expecting a thrilling competition over the six-hour distance.

The race at Silverstone starts on Sunday at 12:00 local time. The racing action can be watched on the internet by live streaming on www.audi-liveracing.com and on www.fiawec.com. Eurosport will broadcast parts of the race live on television as well. In Germany, Eurosport 2 will air coverage from 13.00 to 13.30 and from 15.00 to 15.30. Eurosport 1 will show the final phase of the race from 18.00 to 19.00.

Dr. Wolfgang Ullrich (Head of Audi Motorsport): “We knew that the qualifying format wouldn’t be easy. In addition, rain set in today on the first lap. We started on intermediate tires with both cars in order to take advantage of the just partially damp track. The rain was very heavy at two locations of the track and after receiving feedback from the drivers we switched to rain tires. But then the rain abruptly stopped and our drivers had to finish their two laps on their treaded tires. Our competitor Toyota opted for untreaded tires. In the qualifying session of our second drivers we were no longer able to recover the big time difference. Tom Kristensen and André Lotterer achieved good lap times nonetheless. Our grid positions aren’t ideal but at a 6-hour race the starting positions aren’t the most important thing.”

Ralf Jüttner (Technical Director Audi Sport Team Joest): “New rules for the first time plus changeable weather. That was a bit difficult. We did the right thing by starting on intermediates but both drivers on their warm-up lap said that it was too wet. These were borderline conditions and we didn’t make optimum use of them. Today, a lot of luck was involved. In retrospect, we were a bit too conservative in our tire choice.”

Loïc Duval (Audi R18 e-tron quattro #2): “In addition to the new qualifying mode, there were other incalculable factors. I was driving in relatively heavy traffic plus rain set in. After we changed to rain tires the track dried off surprisingly fast. With only 20 minutes of time for two drivers we didn’t have a chance to make another tire choice. Tom Kristensen then had better chances on untreaded tires and made good use of them.”

Tom Kristensen (Audi R18 e-tron quattro #2): “A very intensive qualifying session! Only 20 minutes for two timed laps of two drivers, respectively. On intermediate tires I encountered a relatively dry track. My car was very good when I caught a Toyota on my second lap and lost time. I even drove another lap but the tires had already gone past their best point. I’m looking forward to a nice, tough competition in the race.”

Allan McNish (Audi R18 e-tron quattro #2): “For two days there’s unsteady weather all the way into qualifying and it’s very cold. It wasn’t easy to warm up the tires; that’s why we weren’t able to make optimum use of them right from the beginning. The balance of our car though is very good. I’m expecting a tough rival on Sunday and believe we haven’t seen the full potential yet – neither with Toyota nor with us.”

André Lotterer (Audi R18 e-tron quattro #1): “I was driving on untreaded intermediate tires on a relatively dry track. The times were good and we were able to reduce our gap. Benoît Tréluyer had a problem with the setting of the traction control. That’s why he had no chance of achieving good times. But we’re in for a long race and we know how fast our car is.”

Benoît Tréluyer (Audi R18 e-tron quattro #1): “Unfortunately, there was a small software problem with the traction control so that I wasn’t able to perfectly accelerate. We’re going to analyze the error in detail. In addition, there was the challenging tire choice. It’s nice that André Lotterer caught up again with excellent times.”