Audi in third place at the Gulf 12 Hours 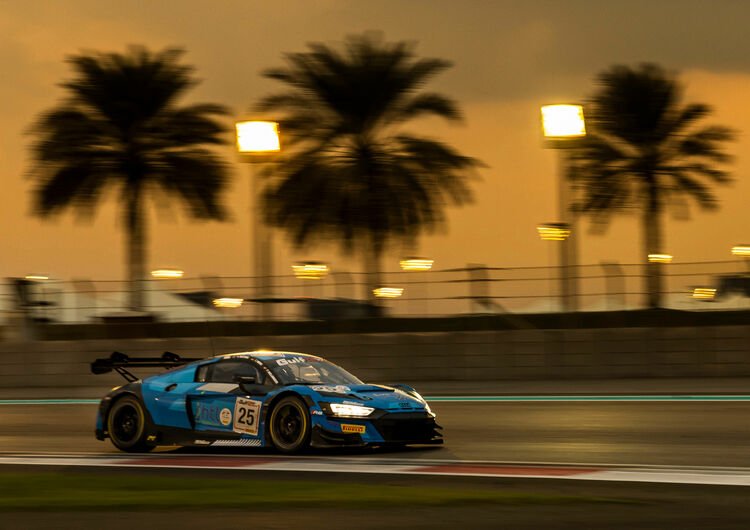 Although all four Audi R8 LMS cars posted a combined 70 leading laps in the season finale of the Intercontinental GT Challenge, Audi Sport customer racing was denied another victory at the end of a great international endurance racing season. At the end of a race marked by many neutralizations at the Yas Marina Circuit in Abu Dhabi, Erwan Bastard/Christopher Haase/Patric Niederhauser clinched third place overall behind the AF Corse team.

“We would have liked to have driven a little further to the front in this thrilling endurance race,” says Chris Reinke, Head of Audi Sport customer racing. “Because we were in front with one of each of our four Audi R8 LMS cars at a total of 16 different times during the race. In the end, our opponent Ferrari was a little better – congratulations on the victory. Nevertheless, we look back on a first-class endurance season with three 24-hour overall victories in Dubai, at the Nürburgring and at Zolder. A big thank you to everyone involved for that.” On the very first lap of the Gulf 12 Hours, Audi Sport driver Kelvin van der Linde in the Audi R8 LMS of Audi Sport Team Tresor took the lead from third on the grid. His Audi Sport teammates Mattia Drudi and Dennis Marschall later recorded further laps in first place as well. For a total of 17 laps, car number 66 maintained its position at the front of the field. However, a little more than three hours before the end, Marschall made a driving mistake: He touched an opponent while overtaking and ultimately had to park the damaged Audi.

Audi Sport Team Saintéloc led the race with the number 25 car for a total of 22 laps. Audi Sport drivers Christopher Haase and Patric Niederhauser shared duties in the 12-hour race with Erwan Bastard. After winning the titles in the GT4 European Series and GT4 France with Saintéloc Racing in the Audi R8 LMS GT4, the French privateer racer competed for the first time in the significantly faster GT3 sports car and mastered his task with flying colors. Together, the driver trio finished third after 335 laps, just 15.1 seconds behind the winners and 0.751 seconds behind the runners-up.

In the end, the Tresor Attempto Racing team recorded ninth place. The privateers Alex Aka/Pietro Delli Guanti/Finlay Hutchison had started from 30th place in the number 99 car and improved by a total of 21 positions in a strong starting field. Amid many safety car phases and tactically distributed pit stops, the privateers were still at the top of the timesheets for 15 laps. In the end, the driver trio won the Silver Cup classification.

The Saintéloc Junior Team led the field with the number 26 Audi R8 LMS for a total of 16 laps. Simon Gachet, Lucas Légeret and Audi Sport driver Gilles Magnus shared the duties in Abu Dhabi. Magnus was forced to retire one and a half hours before the end with a drivetrain issue.