Audi in the DTM: ‘We Are The Champions’

Meet the next generation of e-mobility. More than a car, the Audi A6 e-tron concept is a vision of the future. From elegant proportions to state-of-the-art lighting, Philipp Römers, Head of Exterior Design, talks about the innovative engineering and pioneering design that makes this concept car a step into tomorrow. #Audi #A6e-tronConcept #FutureIsAnAttitude #emobility
04/15/21 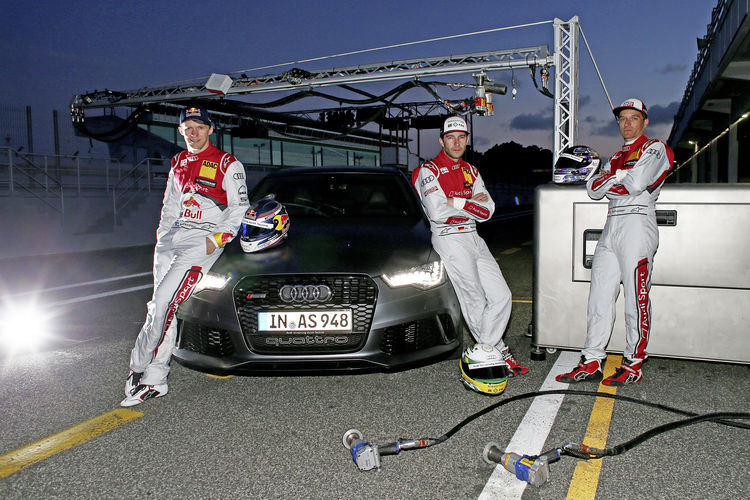 ‘We Are The Champions’ – the famous song by the legendary rock band Queen is Audi Sport’s motto for the 2015 DTM. Audi will be starting the new season at Hockenheim on the first weekend in May as the title defender of the manufacturers’ crown – with three drivers as the spearhead who, together, have already won a total of five DTM titles.

Gathering the ‘old hands’ Mattias Ekström (S), Mike Rockenfeller (D) and Timo Scheider (D) for a joint photo shoot these days is nearly impossible. The calendars of the three DTM stars who, due to their successful careers, are particularly sought-after in races, tests and for PR commitments, are simply too full and differ too much from each other.

Even the first official DTM tests of the year that will continue at Estoril, Portugal, until Friday, are no exception. When Timo Scheider arrives from a mountain bike race in South Africa on Wednesday, Mattias Ekström has already packed his suitcases again. And Mike Rockenfeller will be traveling from Lisbon directly to the racing debut of the new Audi R8 LMS GT3 sports car at the Nürburgring.

But there is one thing that always unites the three DTM Champions: their passion for the DTM and their enthusiasm for the sportiest cars of their employer. Therefore, despite the icy wind on the Portuguese Atlantic coast, their meeting for a quick photo shoot with the Audi RS 6* in the Estoril pit lane upon which darkness has already fallen, makes them feel warm all over.

“For me as a race driver, the Audi RS 6 is the perfect combination of performance, comfort and dynamics, Timo Scheider raves. “In everyday driving, it is quite simply the Audi model to have. I’ve been driving it as a company car for a very long time and am going to order an RS 6 again.”

His team-mate Mike Rockenfeller has already done so. “I enjoy switching between the A6 TDI* and the RS 6,” says ‘Rocky.’ I like them both. But in terms of looks and sound, an RS model is the absolute stunner in every Audi model range.”

These are entirely the sentiments of Mattias Ekström too, who during winter tests in Finland recently had the opportunity to extensively test the Audi RS 3.* At the moment, however, the family man and father of two relies on an Audi Q7.* “I enjoy driving – and the Q7 is a perfect travel car for the family, which my children love as well,” says the Swede.

In the DTM, driving is what Mattias Ekström loves doing most, too. That is why he is particularly pleased that there will be two qualifying sessions and two races on each of the nine DTM weekends this year. “That’s exactly the right step for the DTM,” the Audi driver is convinced. “Because in 18 races you can afford to make a mistake now and then everybody will be attacking more and driving less conservatively. It’s going to be neck or nothing on Saturday and Sunday. The fans will be seeing even more tough duels and in qualifying there’ll be traffic jam news like those on the Antenne Bayern radio channel ...”

Mike Rockenfeller is convinced that fans will get their money’s worth in 2015 as well. “Qualifying calls for maximum performance. The two races offer a good mix: a little shorter on Saturday and a little longer on Sunday with a pit stop. That also means the teams have got to continue doing a perfect job. We’ve only got four sets of tires for two qualifying sessions and two races – that means you’ve got to manage them well.”

Rockenfeller believes that the field in 2015 will become even closer. “Due to the technology freeze none of the manufacturers has been able to make a major step forwards or backwards. We’ve always had an extremely tight field in the DTM but this year it’s going to be even more extreme. There are 24 drivers on the grid. Every one of them can be at the front, every one of them can win races and every one of them can win the Championship. That characterizes the DTM. And that doesn’t exist anywhere else in the world.”

His team-mate Timo Scheider prepared for the challenges of the new DTM season by competing in the Cape Epic event in South Africa. “This is the world’s toughest mountain bike race with 1,200 entrants and it’s really extreme,” the Audi driver relates with shining eyes. “I survived this challenge and can only say: when it comes to sports I no longer fear anything.”

He is equally excited about the new race format as Mattias Ekström and Mike Rockenfeller. “There are many questions before the first race weekend at Hockenheim for which there are no answers yet,” he says. “We’re hoping that our experience will help and that we’re perfectly set, although it’s clear that there isn’t a single driver in the DTM who has to fear another driver. Anyone who has made it into the DTM absolutely deserves their place.”

One thing is clear: There’s no champion’s bonus in the DTM – not even within the Audi squad. The brand with the four rings has the only unchanged driver line-up versus last year. “This,” says Dieter Gass, Head of DTM at Audi Sport, “is something I rate as an advantage for Audi. We’re really excited about the new season.”

Tickets for the season opener at Hockenheim that will feature the new new Audi Sport TT Cup and the FIA World Rallycross Championship as well, are available on the internet at www.audi-motorsport.com.