Audi in the DTM: Comeback in Europe’s most popular touring car series 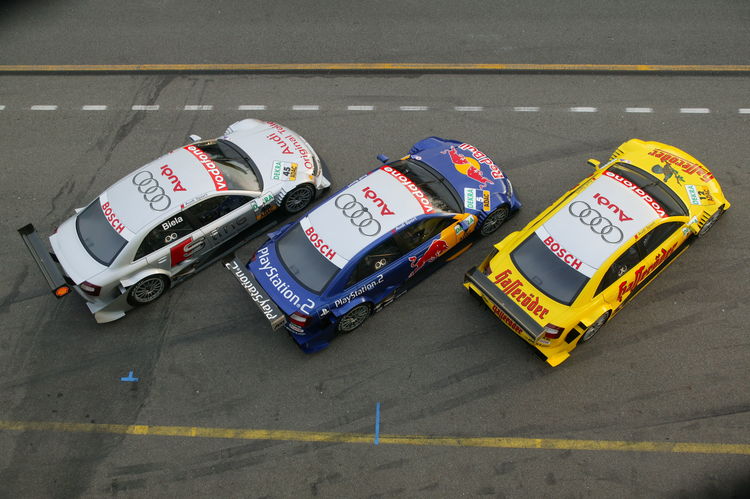 Audi A4 a perfect base

Audi banks on the current A4, Audi’s best selling model in Germany, for the works comeback in the DTM. “The A4 fits perfectly to the new DTM technical regulations,” explains Audi Motorsport chief Dr Wolfgang Ullrich. “On top of this, the Audi A4 already has a long tradition in touring car sport.” From 1995 to 1999 the Audi A4 quattro was the world’s most successful Super Touring Car. The Audi A4 STCC won the Swedish Touring Car Championship (STCC) in 2003.

The A4 DTM version is powered by a strong four-litre V8 engine with approximately 460 hp. A modern and enormously stiff space frame hides beneath the predominantly carbon fibre skin. The driver sits in a carbon fibre safety cell, comparable with the monocoque of a single seater. To ensure the optimum weight distribution, the driver sits almost where the rear seats are found in a production A4. The V8 engine could therefore be installed as far behind the front axle as possible.

The Audi Sport engineers were not only able to resource their wealth of information from the touring car days. Much know-how from the successful Audi R8 poured into the new Audi touring car racer. “We learnt a great deal from the sport prototypes,” explains Wolfgang Appel, Head of Vehicle Technology at Audi Sport. “Although no long distance races featre in the DTM, as far as the ease of maintenance, handling the car during pit stops, assembly concepts and production engineering were concerned we were able to transfer a great deal from the R8 to the A4 DTM.”

The engineers and mechanics of both Audi works teams will benefit the most from the ease of maintenance. “For a touring car, the A4 DTM can be dismantled and reassembled extremely quickly, as a result we save a lot of time over the course of a race weekend,” says Ralf Jüttner, Audi Sport Infineon Team Joest Technical Director.

Many details also flowed into the V8 power unit as a result of the involvement in endurance racing. Although only genuine sprint races with a maximum distance of 160 kilometres make up the DTM, the number of engines per team and season is limited to three. Therefore, reliability also plays a major role in the DTM. Routine for Ulrich Baretzky, Head of Engine Technology at Audi Sport: “Reliability has always had top priority at Audi. In five years with the Audi R8 we never had a single engine failure during a race.”

The engine previously utilised in last year´s Abt-Audi TT-R is used as basis for the A4 DTM. Numerous details of the four-litre power unit were optimised, which now produces around 460 hp. “The DTM regulations leave the engineers little room for manoeuvre, so detail work is even more important,” says Baretzky. The engine ancillaries including the induction and exhaust systems number among these details. When compared with last year, the greatest changes are found in this area. Visible at first glance: The exhaust pipes protrude form the side of the car in front of the rear wheels.

Le Mans influence on the aerodynamics

Because of the restrictive nature of the DTM regulations, drafted for performance parity and cost consciousness, detail work in the aerodynamic field also plays an important role. The Audi engineers again profited from findings made in the sport prototype field. Specifically at the 24 Hour race at Le Mans with its high average speed, the aerodynamic is of great importance. Therefore, not only did numerous details flow into the A4, which originate from the R8, but also a component of the basic concept: The so called “boat shape”, which distributes the air flow under the car in the area of the front wheels, is, for a touring car, extremely slim on the A4 DTM and guarantees a particularly high level of downforce.

Audi drivers impressed by A4 DTM

“Everything on the A4 DTM is a little better than on the TT-R,” raves Audi works driver Mattias Ekström, who was best Audi driver in last year’s DTM. “Every detail is worked and executed absolutely professionally. The Audi Sport team has left nothing to chance during the development.”

Abt and Joest: two strong partners

The homework completed by Audi Sport must be implemented at the circuit by two strong partners: The factory teams of Audi Sport Team Abt Sportsline and Audi Sport Infineon Team Joest who have prepared themselves meticulously for the 2004 season.

Hans-Jürgen Abt’s team, which sensationally won the 2002 DTM against the might of the works teams, enters four A4 DTM cars divided in two teams. Approximately 50 employees are in action for Abt Sportsline at the DTM events. Christian Abt (Germany) and Tom Kristensen (Denmark) drive two Hasseröder-yellow A4 DTM cars, Mattias Ekström (Sweden) and Martin Tomczyk (Germany) handle two A4 DTM cars in the blue design of partners Red Bull and Sony Playstation2.

Reinhold Joest’s team, an AUDI AG partner since 1998 and which played a decisive role in the successful R8 project, assume responsibility for the entry of the Audi A4 DTM cars for the two seasoned campaigners Frank Biela (Germany) and Emanuele Pirro (Italy). The Audi Sport Infineon Team Joest cars are silver, bearing the sporting kit “S line” logos of quattro GmbH and the signs of long time Audi partner Infineon. Approximately 35 people are in action for Joest in the DTM.

The ten rounds of the 2004 DTM will be held in Germany, Portugal, Italy, Czech Republic and in the Netherlands. All races will be broadcast alternatively by ARD and ZDF live. On average last year 1.52 million viewers followed the live ARD and ZDF broadcasts. The reception at the circuit also underlines the enormous popularity of the DTM: An average of almost 65,000 fans were at each event. The DTM has been established internationally for a long time: TV stations in 175 countries carried reports about the premier class of touring car racing last year. In addition to ARD und ZDF, ten more international TV stations will broadcast DTM races live this season.