Audi in grid positions one to three at Spa 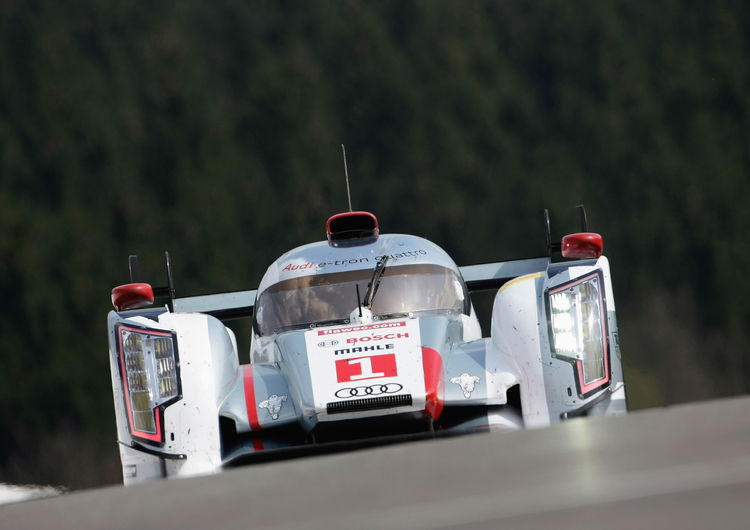 Audi prevailed in qualifying for round 2 of the FIA World Endurance Championship (WEC): In qualifying at Spa-Francorchamps, Audi managed the maximum – last year’s World Champion is at the front of the grid with all three hybrid sports cars. Marcel Fässler (CH) and André Lotterer (D) on their four best laps achieved an average of 1m 59.961s. In the number 1 Audi R18 e-tron quattro they are competing together with Benoît Tréluyer (F) and were the only driver squad to break the two-minute mark.
Download PDF (167 KB)
Facebook
Twitter
LinkedIn
WhatsApp

Audi prevailed in qualifying for round 2 of the FIA World Endurance Championship (WEC): At Spa, the three Audi R18 e-tron quattro cars secured the three front grid positions and thus have good prerequisites for the race that starts at 14:30 on Saturday.

In qualifying at Spa-Francorchamps, Audi managed the maximum – last year’s World Champion is at the front of the grid with all three hybrid sports cars. Marcel Fässler (CH) and André Lotterer (D) on their four best laps achieved an average of 1m 59.961s. In the number 1 Audi R18 e-tron quattro they are competing together with Benoît Tréluyer (F) and were the only driver squad to break the two-minute mark.

An impressive performance was achieved by Lucas di Grassi (BR) and Marc Gené (E). With Oliver Jarvis (GB) they share the number 3 hybrid sports car which has been aerodynamically optimized for the upcoming run at Le Mans. But even on the track in the Ardennes that is less suitable for this body version, they qualified for the front row by posting a time of 2m 00.236, missing the best time by only 0.274s. On his first lap, Lucas di Grassi even set the fastest time of the day at 1m 58.934s.

Third place is shared by the three leaders of the standings. Tom Kristensen (DK) and Allan McNish (GB) on average posted a lap time of 2m 00.610s. They are contesting the race together with Loïc Duval (F). As Audi’s best immediate rival, the number 7 Toyota in position four missed the best time by 0.986s.

The 6-hour race at Spa starts at 14:30 on Saturday. The second of eight rounds of the season can be watched on the internet by live streaming at www.audi-liveracing.com and at www.fiawec.com. Eurosport is airing live reports from Spa. In Germany, the channel will cover the final phase of the race from 19.30 to 20.30.

Dr. Wolfgang Ullrich (Head of Audi Motorsport): “It’s nice to have three cars at the front. It’s also good to see that car number 3, that is running with the Le Mans specification, is doing well on the track at Spa. Toyota was not as strong as we’d expected in qualifying but that means nothing with respect to the race because the times are close together. This is good motivation for the squad that’s been working hard. We’re going to try and clinch a good result on Saturday as well.”

Christopher Reinke (Overall Project Leader LMP): “We’re pleased with positions one, two and three for Audi. The outcome wasn’t to be expected quite like this because we know that our competitors have done a good job of gearing up and are competing with new technology. For the moment, this is a nice result. But we’re here to win a race. And that’ll only be held on Saturday.”

Ralf Jüttner (Technical Director Audi Sport Team Joest): “After our drivers completed their first lap, qualifying was interrupted by the red flag. That’s why we’ve now got a few more laps on our tires than planned. Lucas di Grassi managed a particularly strong lap. We’ve got three cars at the front. That’s a good starting base.”

Marcel Fässler (Audi R18 e-tron quattro #1): “My laps worked out pretty well. On average, we were the quickest trio. A big ‘thank you’ to Audi Sport Team Joest for making such a strong effort to support us by working long hours. The fastest time is our way of reciprocating for their superb work, and a good starting base for Saturday.”

André Lotterer (Audi R18 e-tron quattro #1): “A fantastic result! Qualifying alongside Marcel Fässler was great fun. He was brilliant, I made an effort, the car was superb. Benoît Tréluyer is in good shape as well. I’m hoping for things to continue this way for Audi.”

Benoît Tréluyer (Audi R18 e-tron quattro #1): “That was a good qualifying session and the whole squad did a thorough job – the engineers, the mechanics and us drivers. Our Audi R18 e-tron quattro was well balanced in all practice sessions. With two free practice sessions plus qualifying on a single day we had to carefully organize our work. The result is nice for all of us.”

Marc Gené (Audi R18 e-tron quattro #3): “The front row of the grid is a good result. But on reflection, we could have achieved the best time as well. I was running on old tires all day and didn’t know what to expect on new tires. That’s why my first lap was relatively slow. I should have driven a third lap but we chose not to. That was my mistake. But Lucas di Grassi delivered a perfect performance today.”

Lucas di Grassi (Audi R18 e-tron quattro #3): “Congratulations to Audi on taking positions one to three. For us, the front row is a good result. The three of us worked a lot in free practice. That’s why I’ve got a good feeling before this 6-hour race.”

Oliver Jarvis (Audi R18 e-tron quattro #3): “Our performance capability is much higher than expected. Particularly on new tires the car feels good. But I don’t want to raise too many expectations because we’re driving with less downforce, so when the tires start degrading over the distance, the situation will become more difficult for us. So the race will be much harder for us than qualifying. Position two on the grid is a nice result.”

Loïc Duval (Audi R18 e-tron quattro #2): “Our qualifying wasn’t easy because we were running in traffic. But we’ve got to basically improve our pace a bit more as well because we’re lacking a few tenths. But in a 6-hour race anything’s possible. Over the long run, we were very consistent in the practice sessions today. We’ve still got to fine-tune the set-up a bit more.”

Tom Kristensen (Audi R18 e-tron quattro #2): “On my first fast lap, I unfortunately hit some traffic. Then there was a red flag. Afterwards, I was only able to improve by two tenths of a second. Unfortunately, Allan McNish didn’t catch a free lap either. Now I’m looking forward to a long race. We’ve got a good team and a strong car.”

Allan McNish (Audi R18 e-tron quattro #2): “The day remained dry although we’d been expecting some rain in qualifying. We knew that traffic would be playing a role. In fact, I had to overtake other cars on every timed lap. But that’s the way the conditions are when a total of four laps have to be driven and the average is subsequently determined. Now we’re concentrating on finding the best balance for Saturday. The track is rough on the tires with its many fast, long turns. In any event, positions one, two and three for Audi are a good beginning.”