Audi Hungaria: anniversary year kicks off with projects for the future 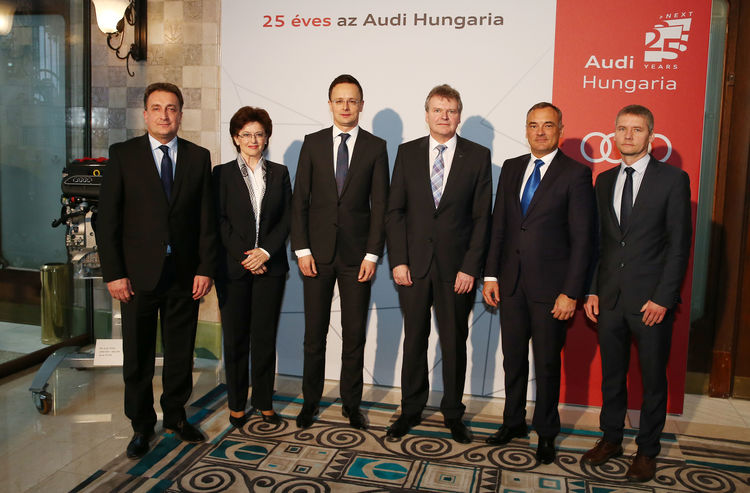 Audi Hungaria enters its anniversary year: Audi officially established the company in Győr exactly 25 years ago, on February 18, 1993. Audi Hungaria has been a success story ever since, and will be adding to its roll call of achievements this year. At the Anniversary Press Conference Péter Szijjártó, Minister of Foreign Affairs and Trade, and Achim Heinfling, Chairman of the Board of Management of AUDI HUNGARIA Zrt., paid tribute to the carmaker’s accomplishments in Hungary.

“Audi Hungaria has been the embodiment of innovation for 25 years. I look back with pride on what our company and its workforce have achieved, and am confident about the next 25 years,” remarked Achim Heinfling, Chairman of the Board of Management of AUDI HUNGARIA Zrt. “We are a stable pillar of the Hungarian economy and our involvement sets the benchmark for the future.” Audi Hungaria enters a new era in a double sense in this anniversary year: The brand’s first SUV model to be built in Hungary, the Audi Q3, will go into production at Győr in 2018. And engine production will be adding a strategically important new area of activity when series production of electric axle drives for the Audi e-tron gets underway “These projects mean we are securing the long-term success of our company,” added Heinfling.

Since the company’s founding 25 years ago it has built a total of 33,294,371 engines. That is equivalent to 5.6 billion horsepower. Since 1998, 1,153,531 automobiles have left the production line there. Arranged nose to tail, they would stretch from Győr to Dakar, in Senegal.

Audi Hungaria again achieved a high production volume last year: In 2017 the company built a total of 1,965,165 engines. That figure included 1,073,998 three and four-cylinder gasoline as well as 404,796 four-cylinder diesel engines. The company also manufactured 260,324 six-cylinder gasoline and 174,352 diesel engines. 14,640 units of the five-cylinder gasoline engine, voted “International Engine of the Year” for the eighth year in a row, were made. The company also produced 36,757 eight and ten-cylinder engines, as well as 298 electric motors in preparation for series production. This total means Audi Hungaria remains one of the largest engine manufacturers in the world.

The workforce in engine production accomplished eight product launches, including the 2.0 liter CNG engine for the Audi A5 Sportback g-tron and A4 Avant g-tron, the development of which was also led by Győr. This is also the first CNG engine to be built at the Hungarian site. In 2017, Audi Hungaria supplied 32 locations of the Volkswagen Group with its efficient, high-performance engines.

On the automobile production side, a total of 105,491 Audi models left the production line in 2017. With 72,433 units built, the Audi A3 Sedan* was the highest-volume model. Audi Hungaria made 17,568 Coupés* and 4,606 Roadsters* of the Audi TT models, which have been built exclusively at Győr for 20 years now. The company also manufactured 10,716 Audi A3 Cabriolets and 168 of the Audi Q3 in 2017 in preparation for its series production start. The sporty Audi RS 3 Sedan* was also successfully brought on stream. Automobiles built by Audi Hungaria were supplied to more than 90 countries. The largest markets for the Győr-built models in 2017 were again the United States, the United Kingdom and Germany.

The 2018 anniversary year promises to be an exciting one for the company: Series production of the Audi Q3 is due to start. To that end, the company has erected a new body shop with a floor area of 80,000 square meters (861,112 sq ft), in which 700 robots have already been installed. The employees are also being prepared for the new model’s production start. They have attended specialist qualification and further training sessions. One major future project starting in Győr is series production of electric drives. Audi Hungaria is taking on the role of lead plant for electric motor production within the Audi Group and setting electric mobility trends in the Hungarian automotive industry. Electric drive production follows an entirely new modular assembly concept, which results in greater flexibility and effectiveness.

Audi Hungaria not only builds engines and automobiles in Hungary; as one of the biggest investors and employers, it also plays an important economic role in the country and is a major figure in the wider Győr region. Directly and indirectly, the company provides employment for 30,000 people. Social responsibility and sustainability are deeply rooted in the corporate strategy. Audi Hungaria is highly involved in the region’s cultural, social and sporting life.

The 25th anniversary will be marked with a wide array of activities spanning the whole year. Today there will be a gala evening in honor of the first colleagues from 1993. In the spring, the company will be organizing a 25 kilometer (15.5 mile) run for employees, in the summer Audi Hungaria will be opening its doors to the public and in the fall the company will be marking the anniversary at an event attended by guests from the worlds of politics, business and culture.

Fuel consumption of the models named above**